Nokia today announced that its Ovi Store has reached 3 million downloads per day, a milestone spurred by overall global demand and a recent update that gives users of Nokia’s new Symbian smartphone family a friendlier look and feel as well as more popular apps and games. The company is gaining significant software developer momentum with more than 400,000 signing on to Nokia in the past 12 months, and 97 surpassing the million download milestone for their apps.

In related news, the Nokia Qt Software Development Toolkit (SDK) and the Qt SDK combined have been downloaded 1.5 million times as developers discover this approach can improve the speed and efficiency of creating apps for mobile devices, including smartphones like the new Nokia N8, Nokia E7, Nokia C7 and Nokia C6.  In a strategic move last month, Nokia announced unified application development around the Qt/QML framework to simplify creating apps for Symbian-based devices and products that will be powered by the new MeeGo operating system. 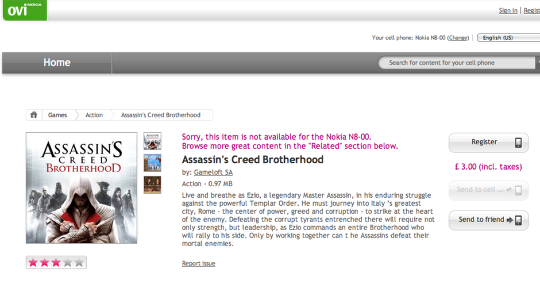 “The rapid growth on Ovi Store passing the 1 billion downloads mark demonstrates that Nokia is a competitor in both scale and size when it comes to its services,” said Scott Ellison, vice president of mobile and consumer connected platforms at IDC.  “With Nokia’s stronger focus on the Qt platform and improved developer ecosystem, Nokia should continue to see its developer numbers increase as developers see profit from new revenue shares, operator billings and the ever-growing user base around the world.”

“Without any promotion or marketing dollars, in a few weeks we’ve hit 200,000 downloads in Ovi Store faster than we did with App Store,” said Anton Gauffin, CEO of BLStream, creator of the game Crazy Hamster.  “We’re very positively surprised with what we’ve seen on Ovi, and we’re on track to exceed our App Store performance even though we’ve been there longer.”

“Working closely with our partners and the developer ecosystem, we will continue to focus on bringing the best local content to UK consumers, pushing the experiences they enjoy with their Nokia,” said Rupert Englander, head of services, Nokia UK & Ireland.