Compliments of BlackBerry PlayBook users can complete the mission of one of the most acclaimed FPS games for smartphones in Modern Combat 2 Black Pegasus HD, and feel the thrill of arcade racing like never before in Asphalt 6 Adrenaline HD.  Enjoy an immersive gaming experience on the PlayBook’s 1 GHz dual-core processor offering blazing speed and glorious graphics.

Both games are available from BlackBerry App World now – http://appworld.blackberry.com/webstore/search/free%20playbook%20games/

If you haven’t picked up a BlackBerry PlayBook yet, then you can do so here. We highly recommend it now, especially with this new update.

Other features made available this week via the BlackBerry® PlayBook™ OS 2.0 update include: 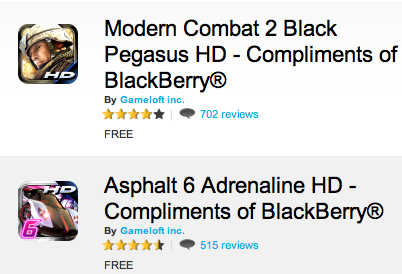 ·         Integrated email client with a powerful unified inbox consolidating messages from Facebook, LinkedIn and Twitter, as well as personal and work email accounts
·         Social Integration with Calendar and Contacts apps
·         Updated BlackBerry Bridge with remote control feature allowing the BlackBerry smartphone to be used as a wireless keyboard with the BlackBerry PlayBook
·         Improved mobile productivity with updated document editing functions, the new Print To Go app, and increased control and manageability of corporate data with BlackBerry Balance
·         Thousands of new apps and content (including a range of Android apps that will run on the BlackBerry PlayBook)