Aperture 3 is described by Apple as ‘designed for iPhoto users who want to get more out of their photos’. That pretty much sums it up. It’s an excellent and powerful tool for refining images, showcasing your work and managing massive libraries on your Mac.

This new version 3.2.3 addresses and fixes the usual bugs but perhaps most notably, like iPhoto, it now allows users to delete photos from their Photo Stream. That’s the iCloud service and enables users to sync photos across their various enabled devices. You can check out the full details of this update below in What’s New? 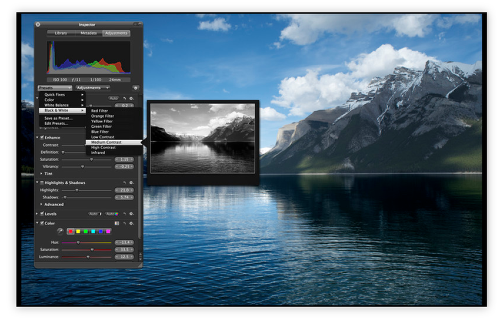 • Addresses compatibility with iCloud and iOS 5
• Resolves an issue that could cause the "Loading" indicator to reappear in the Viewer when cropping a photo
• Aperture now automatically relaunches into Full Screen mode if the application was in Full Screen mode when last quit
• Pinch-to-zoom gesture now automatically activates Zoom mode in the Viewer
• Left and right swipe gestures can now be used to navigate between photos in the Viewer
• Microsoft Outlook can now be chosen in Preferences as the application used by Aperture for emailing photos
• Fixes a problem that could cause Aperture, running on OS X Lion, to quit unexpectedly when using brushes to apply adjustments
• Loupe now correctly displays magnification levels between 50-100%
• Fixes an issue that could cause Aperture, running on OS X Lion, to display the incorrect color profile on externally edited images
• Import window now includes an option to delete photos from iPhone and iPad after they have been imported into Aperture
• The Lift & Stamp tool now displays the correct cursor icons when being used in Split View and Viewer only modes

This update is recommended for all users of Aperture 3.