Now we do not usually review any gaming apps here at theappwhisperer.com, we specialise in photography apps, whether they’re creative or tool apps but Pixol is a gaming app with an Instagram twist, so we thought we would ask one of our Editors, David Hayes to put it through its paces. Over to you David…(foreword by Joanne Carter).

"I’m stepping outside of my comfort level and taking a look at the game app, Pixol in this article. I have to confess that I am not a Gamer! Many a game app has come and gone from my iPhone and iPad…even that one where it was fun to smash piggies…for a while. That said, I downloaded this app and gave it a whirl.

Pixol almost demands that you have an Instagram account…that I didn’t so I had to establish an account before I could do much with this game. (There is an offline feature where you can play the puzzle games with “canned images”.) So if you already have an IG feed, you’re all set. Otherwise, take a minute to set one up before downloading Pixol. 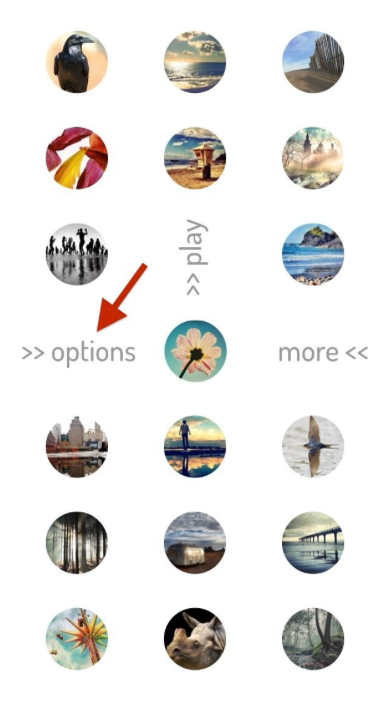 When you first open Pixol, the app gives you a real quick tutorial on how to use it. You might want to pay attention to this, as there isn’t any other Help function within the app that I could find. It also seems that there is no way to view this tutorial again without deleting and reloading the game.

In any case, the opening screen presents you with three options. Let’s talk about these. Clicking on “options” opens this screen… 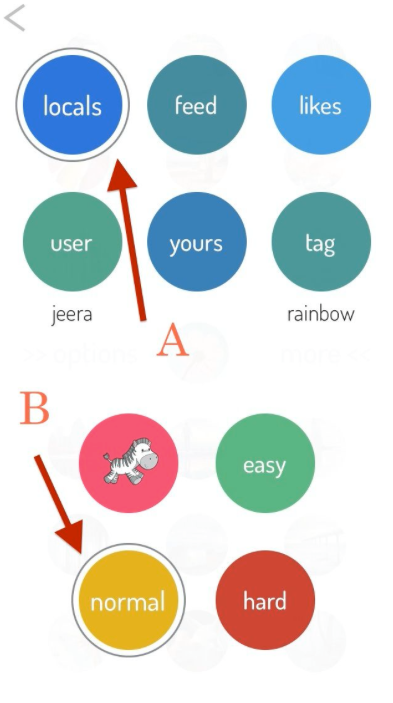 At the top of the screen (A) you are given a choice of Instagram feeds to use as you play. “Locals” is the default and gives you the canned images. The other choices are self-explanatory if you’re an IG user. (For the sake of this review, I will only be using my images (“yours”) as I don’t have permission of others in my feed.)

The lower level (B) gives you three different difficulty levels to chose: Easy, Normal, and Hard. The fourth level…the one with the cartoon zebra figure…is a child friendly game using very child safe images to complete. 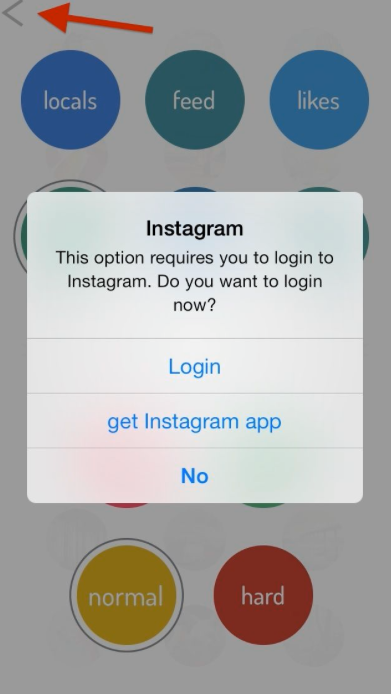 Oh yeah…here’s what you get if you’re not logged into IG when you first start playing…and you have to be to use any option other than “locals”. 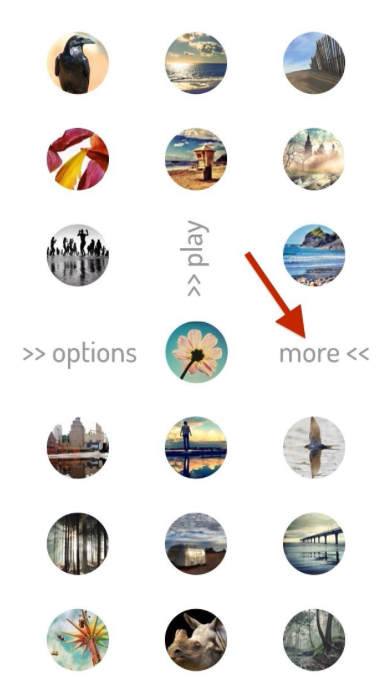 Okay…back to the menu. Clicking on “more” takes you to this screen… 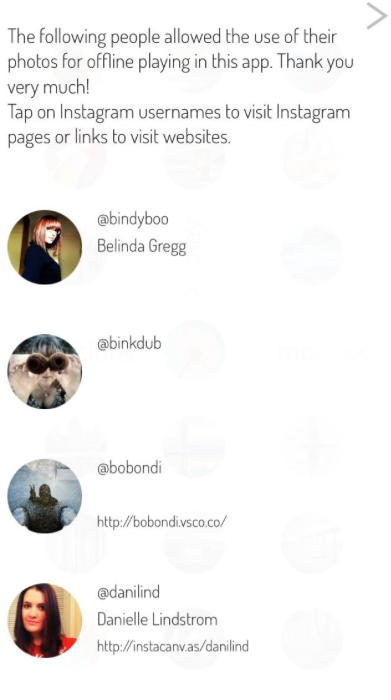 Which gives the names and IG feed handles for all those who have allowed you to use their photos offline. Make sure to pay a visit to their feeds!! 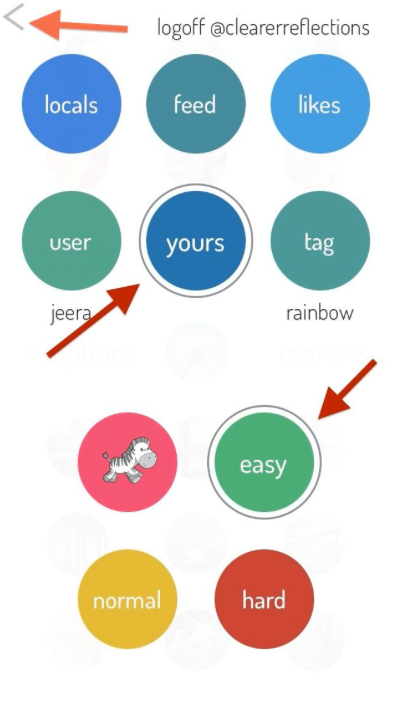 Time to look at the different levels of puzzles! Back in the Home menu, I clicked on “yours”, “easy” and then clicked on the arrow at the top left to go back to the menu. Once there, click on “play” to start the game! 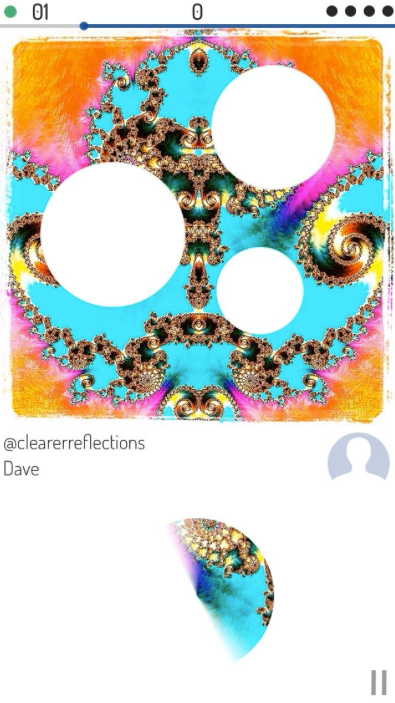 Pixol will randomly pick an image from the IG feed to create a puzzle. In the “easy” mode, there are three blank circles that you’ll complete using the choices given to you, one at a time. You tap on the blank space that you think the choice will complete. As you correctly do this, you’re given another choice until all the circles are filled. You’re working against time so agility and shape recognition is key to success! (As this was my image it didn’t take any time at all to complete!)

During gameplay about 20 different tricks can be applied on the piece of the photo that you have to put back into the image. The idea being to confuse and distract the player, this is the main characteristic of the app – making a simply concept, tricky and fun. 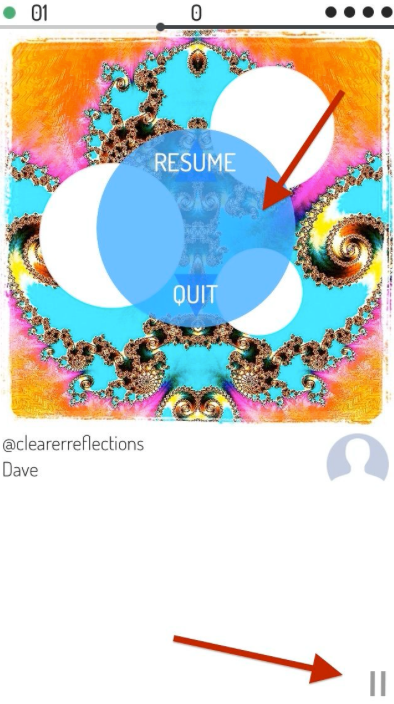 At any time you want to pause or leave the game, click on the double bar icon at the bottom right corner…and this pop-up menu will appear! 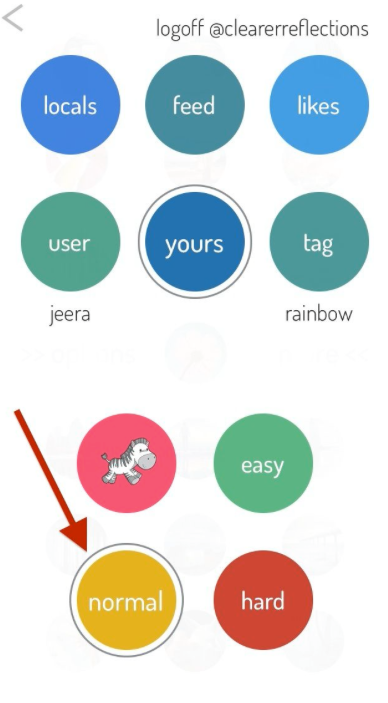 Back to the Home menu…this time to try out the “normal” level. 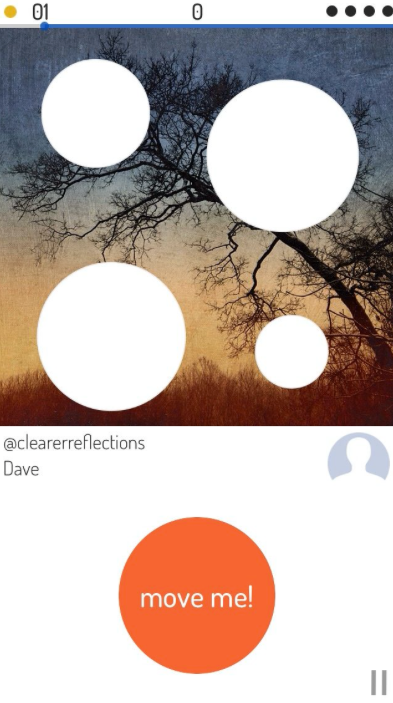 In this level, the image comes to you with four spaces empty and the choices have different action cues you have to follow before you see the choice. Adds a bit more challenge to the timed aspect of the game!! 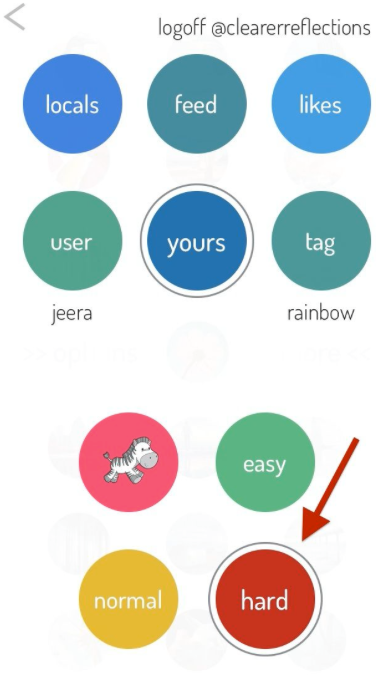 Now for the “hard” level… 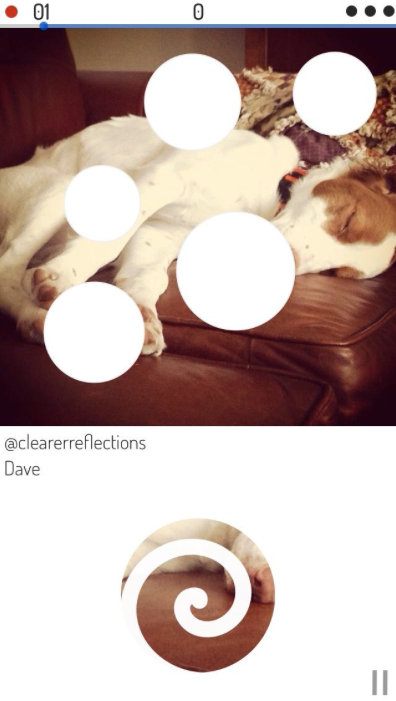 Five, count them, five empty spots in a given image…plus a distracter feature in each of the choices! In this case it was a spinning top effect. (Yes…that is my puppy. Isn’t she just the cutest thing!) 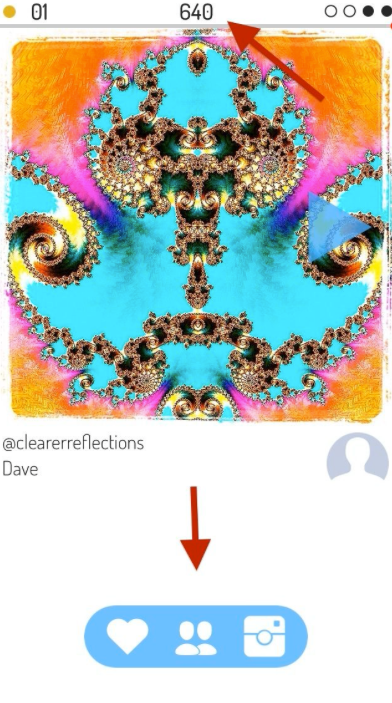 After you complete an image, Pixol displays your score at the top center of the screen. As I’m not a Gamer or use Game Center I don’t know how this works if you’re competing against others…but there it is. Also…at the bottom of the screen is a control panel that allows you to interact with Instagram whilst playing, allows you to comment and like along the way. The Heart icon “favors” the image; the double figure icon takes you to this screen…

Footnote: The Game Center integration is a powerful way for players to compete against friends in challanges and to expose their scores again all other players in the world. 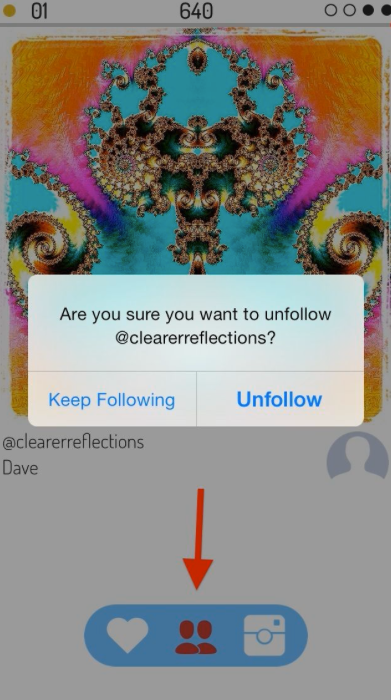 Where you can unfollow…or not…the feed you’re using at the moment. Naturally I didn’t unfollow my own feed… 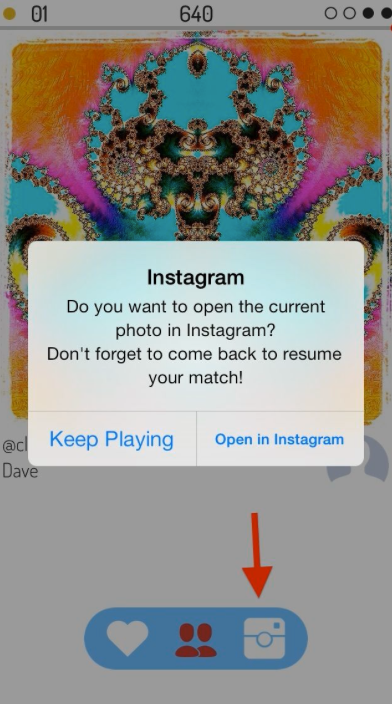 Clicking on the camera icon let’s you leave the game and go directly to IG. As the pop-up screen indicates, you can come back and finish the game later. 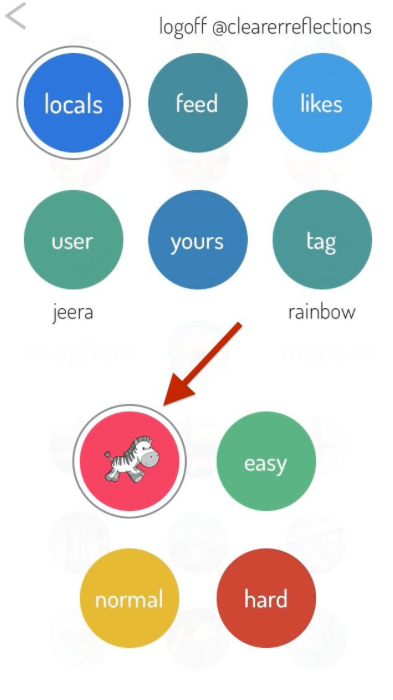 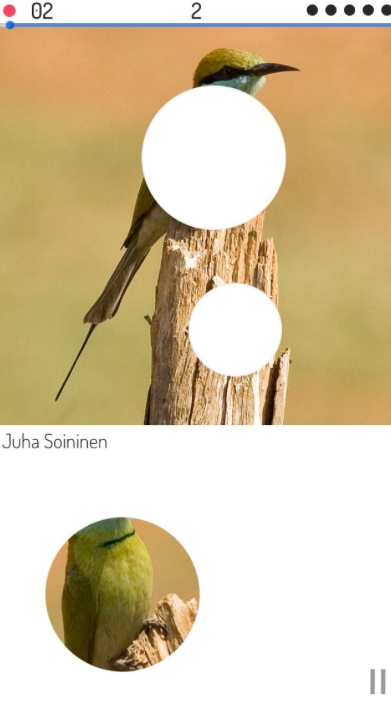 As I commented earlier, here you’re given a very simple image with obvious choices to use completing the picture puzzle. A nice touch!