We are delighted to publish Dilshad Corleone’s (Italian Brother’s) latest Column article today. Dilshad has become involved with an incredibly exciting project, one that unites photography, film and music in the best possible way. I will let him tell you more about the birth of this project but wanted to let you know that this is a series and this is Part 1. In future regular issues Dilshad will be sharing tips and tricks and many of the images he captures along the way. This is a project that in many ways knows no bounds and we’re so excited to publish it exclusively here. Over to you Dilshad (foreword by Joanne Carter).

“It is truly incredible the power of one photograph! Who knows what would have happened if that night I hadn’t posted a SlowShutter shot of the Millennium Bridge with St Paul’s in the Background. I still vividly remember how excited I felt when I took that shot, and funnily enough, it wasn’t even a very good one to be honest.

It was early December, last year, I was at the Tate Modern, waiting for some friends, so I decided to use my time creatively and shoot a classic one that many have already taken: the bridge with the lit cathedral.

It was one of my first attempts with the SlowShutter app. Once back home, and after a bit of editing, I posted it on Facebook with a comment, asking friends for their opinion. This spiraled into a frenzy of comments, with some constructive criticism, which is always welcome.

Among all these observations, there was one from my very good friend Matt Davey, who is a professional music photographer, and with whom I always want to go out and shoot. It was a genuinely nice comment, so I took the opportunity to ask him if he fancied going out on an all night walk, rather than on an all night bender. He sounded quite enthusiastic about the idea and the conversation continued with other people joining in and wanting to participate. It was great; I’d never have thought photography could stir so many people’s imagination.

To cut the story short, something that had started with a simple photograph posted within a social media site and an idea of going out to shoot London’s classic landmarks, (photos that thousands of other people had already done), had now turned into a major project with a director (Mathew Lloyd), who was ready to come out with us and film the night, a sound assistant volunteering his time, various talented musicians offering their work for our video and Matt and I truly looking forward to go out and experiment with a new genre.

As they say, one thing always leads into another, this idea led us into creating and giving birth to The Picture Project, which a collaborative, creative project to explore inspiration in photography and other areas of the arts. What we would like to achieve with this is to get creatives alike to work together, promoting the arts and encouraging those to do what they love. We aim to create multiple videos in the coming future with the aim of helping inspire the world and involve everyone to take part in the creation of these videos.

Let us see where this new path will take us! To me, however, the most important thing will always be to keep having fun together with the people that you enjoy sharing you ideas and emotions.
Keep Shooting. Keep Having Fun and don’t miss our video below! 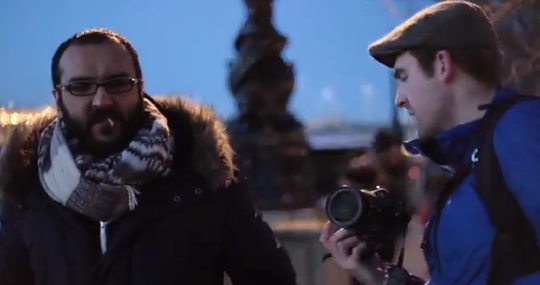