Order early. Brag often. That’s what the pre-order page for the BlackBerry PlayBook says today. Hopefully we will be able to do this, so far it looks good. The 7-inch PlayBook will cost you less than $500 for the 16GB WiFi only model. You can pre order it from Best Buy and it will be rolling out to Staples, Office Depot and RadioShack shortly. In addition, AT&T, Sprint and Verizon will be carrying this tablet.

The full list of where you can buy the BlackBerry PlayBook is shown below. What we would really like to know is when this model will actually be in our hands but there’s no date set although the Shipping Options for the Best Buy order page show the estimate arrival time anywhere between 04/19-04/26/2011 – so by the end of the week you could be bragging on hard.

Soon, you will be able to get your hands on the PlayBook at these stores in the US: 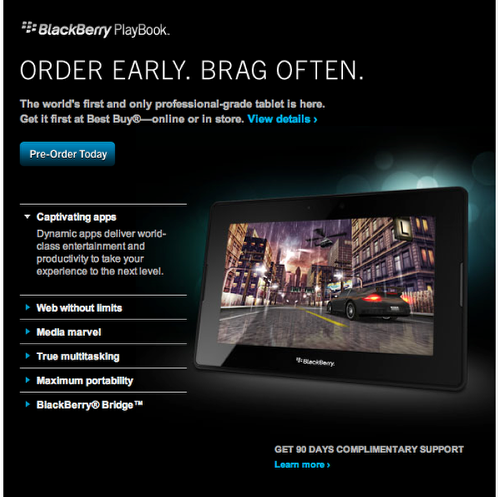 The list below highlights where you will be able to pick this model up in Canada shortly: