Balls! is a score keeper designed specifically for cricket fans. It keeps track of the stats so you don’t have to.   A slick user interface has been crafted to bring a bit of fun to the umpiring role. Balls! is full of extras that your old clicker never had, and is much much easier than plugging the scores into a book – not to mention more fun.

We are currently reviewing this app but before we completed our review we really wanted to find out more of the background to this incredible app. Read our exclusive developer interview below… 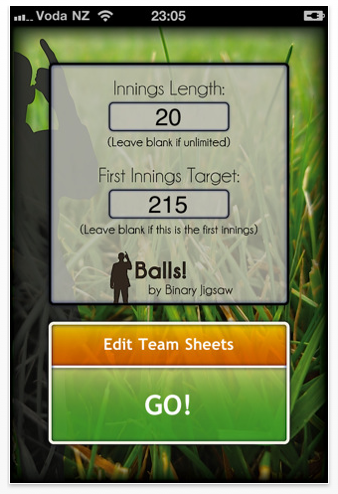 I have played a lot of club cricket over the years, and it felt like every time I went out to umpire there were no counters to use because they were all lost, broken or forgotten. I figured integrating a scoring app into my phone was the ideal solution because I always had my phone with me and I thought it had the potential to be a more versatile cricketing tool. I thought my team mates would appreciate a cleverer option that can track all the game stats so I decided to write one. Balls! offers all this in a package a similar size to a clicker that’s also cheaper and just as easy to use! 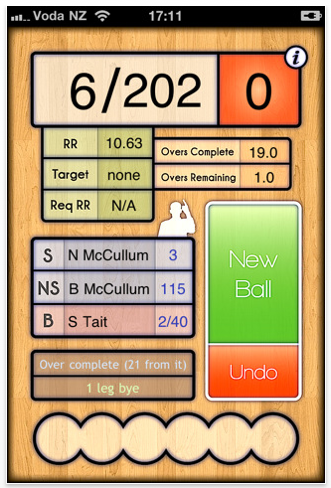 My first step was to design the layout of the app so that the scoring workflow felt right and the app displayed all the information I needed it to. Cricket is a complex game to score, with lots of information to present to describe the state of the game at any one point in time. I worked hard to present the game data in a coherent and uncluttered way, and this layout dictated most of the look and feel of the app. I’ve used bright colours where I can to highlight and group items, and being a cricket app, plenty of grass imagery (of my lawn!). You’ll notice the umpire figure that is on the app icon pops up from time to time on the screens – mainly because I think he looks great and he helps enhance Balls’ branding. 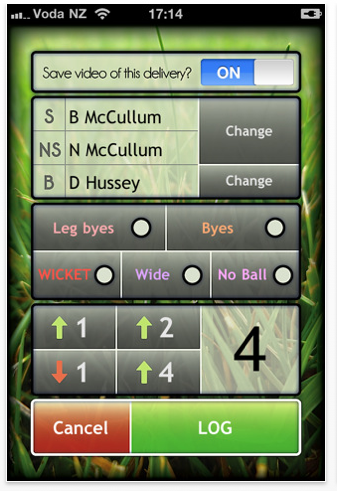 Balls! is targeted at anyone who loves to watch and play cricket. I’ve had emails from dozens of countries (where in some cases I didn’t even know the game was played!) from passionate fans who love the app. People of all ages use the app but I guess the main group would be those aged between 15-40 who play regular club cricket on the weekend. 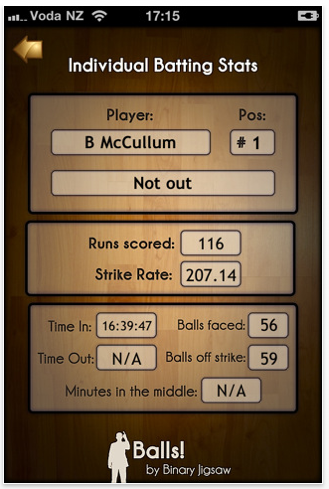 It took approximately five months of development (10-20 hours a week) to complete Balls! I spent many late nights following T20 and ODI games on TV making sure my scoring matched what was happening on the field. My club team mates also helped a lot by spending many hours testing the app during our games. 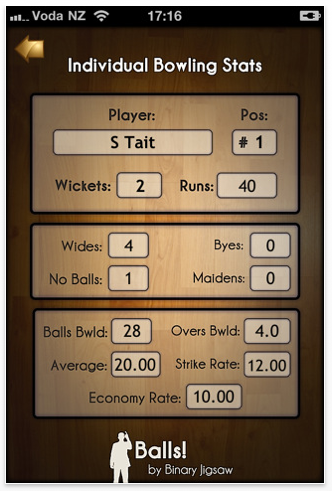 Well, I started developing Balls! as a personal project without much thought to how it might go in the store, but it has become my most successful app by far. I love watching the seasonal variations as the summers are swapped between the hemispheres. iPhone carrying club cricketers love Balls!, and there appears to be a few of them around! Hopefully there’s a few more reading this interview… 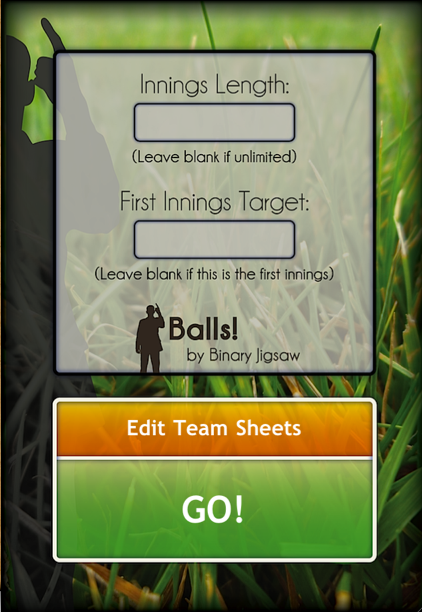 Cricket is a complex game with lots of quirky rules and special scoring scenarios, and it took a long time to work them all into the app. Things like allocating extras correctly, swapping strike at the end of overs, odd methods of dismissal etc all had to be considered and included.

The whole idea of Balls! is to provide a tool that takes something that needs a lot of thought and concentration to get right and turns it into a simple task. My goal was to make the process simple enough so that the umpire can score the game while on the field without being distracted from their decision making duties. I worked through a quite a few different iterations of the design to achieve this, but in the end I finished up with a product I’m pretty proud of. 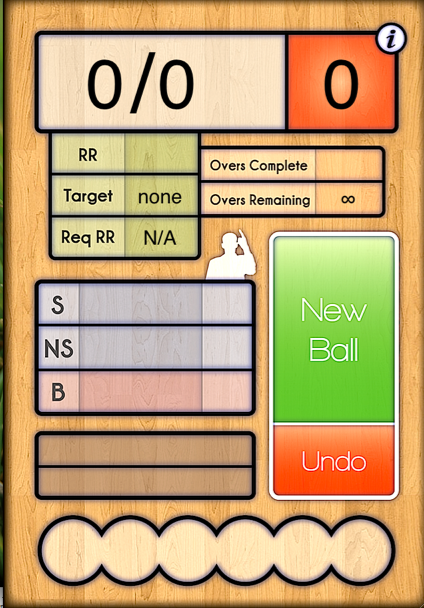 I haven’t yet, but if someone came to me with a great project that they needed help with I would definitely consider it. 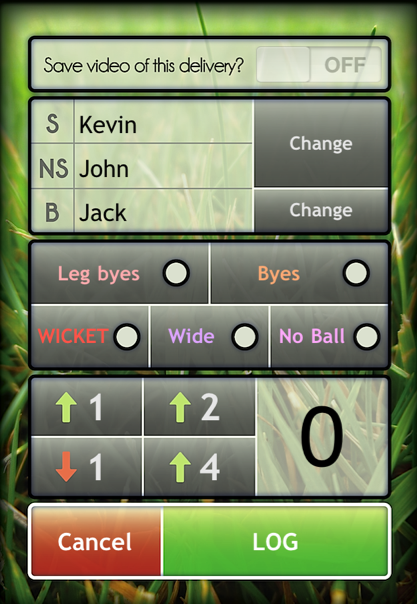 The app store is such a big place it’s easy for your products to get lost amongst everything else. Successful apps need to stand out, and the best way to do that is to get the interface looking awesome and write great code. Quality is super important! 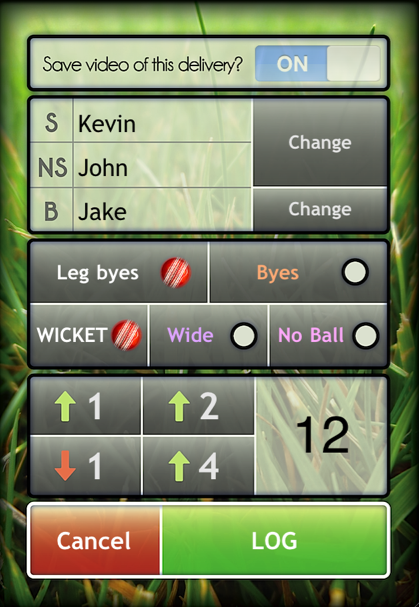 The iOS ecosystem Apple developed is an amazing achievement in such a short time, but that is only part of what makes it all work so well. Sure, Apple have put some great systems in place for developers and provided excellent documentation to support the SDK, but for me it has been the developers posting to blogs and forums with information that been the most significant help. You can be assured that whatever challenge/problem you face when writing for iOS, someone has been there before, solved it, and been prepared to write about it. Without that help, some of the problems I came up against early on in development would have seemed insurmountable and I probably would have given up!

Of all the Objective-C information swirling around out there in the ether, only a small percentage of it doesn’t relate to the iPhone or iOS, so you can see how the platform has captured people’s imagination. There are plenty of excellent resources out there if you’re thinking of learning to write for iPhone. 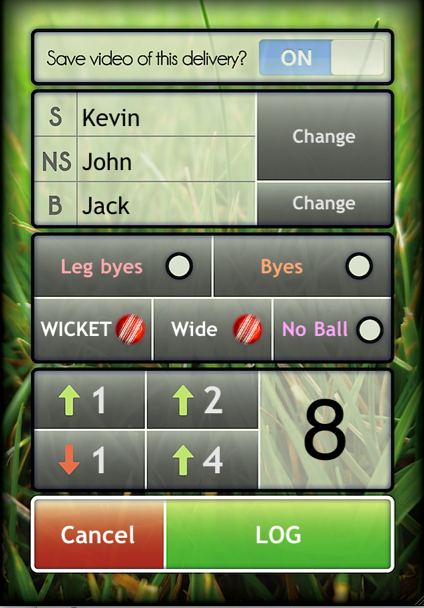 I plan on releasing a baseball app soon that continues on the sporting theme but targets the US market. I’ve also got something completely different in the works. 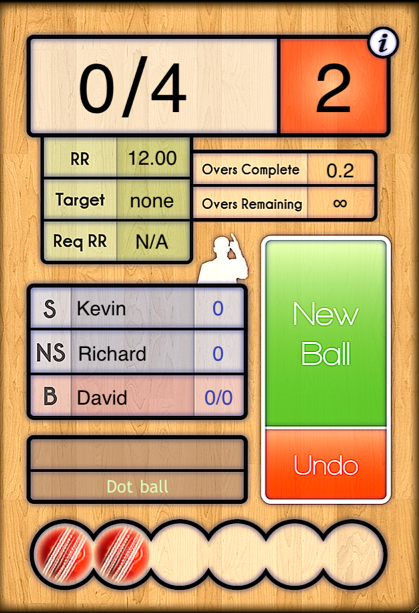 Anything that helps developers connect with users strengthens the marketplace – and that’s a great thing for everyone!

This app is available for $2.99 in the App Store and you can download it here