RIM has launched a new update to Twitter for BlackBerry smartphones that adds features that many users have been asking for – including geotagging, which allows users to identify their location with their tweets; new language support; cleaner interfaces; new notifications and more. 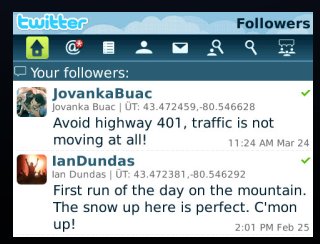 •    @mention Push Notifications – Users are now alerted with push notifications to the ribbon when they have @mentions, helping users quickly reply to @mentions

•    #Topic Autocomplete – When users include a hashtag in their tweet, a dropdown list of key words will be presented based on previously used #topics

•    Retweet Updates – Retweets now appear in the Home timeline with a tag of “retweeted by you,” quickly alerting users that a retweet has been sent

Did you know? Twitter for BlackBerry smartphones has been downloaded more than 10 million times!

Twitter for BlackBerry 1.1 runs on BlackBerry Device Software 4.5 or higher and requires a data plan.