Apple have announced the release of a developer build of the next major version of the Mac operating system, Mountain Lion. The build is already available to Mac Developer Program members and will be released in the Mac App Store late this summer.

Apple states that Mountain Lion contains over 100 new features and introduces several new apps and features to the Mac that already exist in iOS for the iPhone, iPod touch and iPad.

Mountain Lion will include versions of the Messages, Reminders, Notes, and Game Center apps originally available in iOS. Mountain Lion will also include deeper integration with iCloud for email, contacts, calendar, and document synchronization, a Notification Center feature to centralize alerts, and Twitter integration.

The Messages application in Mountain Lion will operate like its iOS counterpart, allowing users to send text messages, pictures, and videos quickly to other Macs and iOS devices. Messages on the Mac will replace iChat. Check out the summary of new features below… 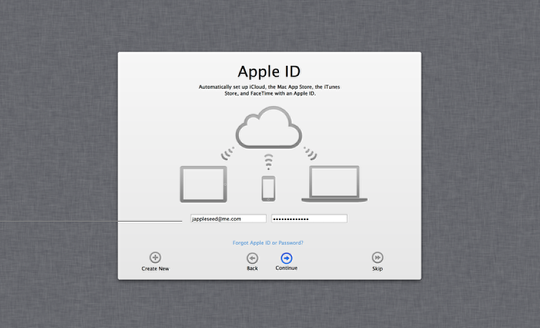 It just works. In more ways than ever. In OS X Mountain Lion, sign in once with your Apple ID and iCloud is automatically set up across your Mac. That means right away iCloud keeps your mail, calendars, contacts, documents, and more up to date on every device you use. So when you add, delete, or edit something on your Mac, it happens on your iPad, iPhone, and iPod touch. And vice versa.

Mac keeps the conversation going. Messages does everything iChat does, and so much more. For starters, it comes with iMessage. And just like iMessage in iOS, it lets you send unlimited messages to anyone on a Mac or an iPhone, iPad, or iPod touch running iOS 5. Send photos, videos, documents, and contacts — even send messages to a group. You can see when your message has been delivered and when someone’s typing a reply. Turn on read receipts, and they’ll see when you’ve read a message. With end-to-end encryption, your messages stay safe and private. And you can start a conversation on your Mac and pick it up on your iPhone, iPad, or iPod touch. So nothing is left unsaid. 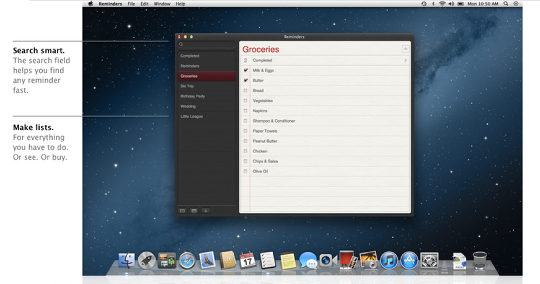 Now nothing slips your mind. When you have so much to do, Reminders helps you get it done. It’s all in a list. More than one, in fact. Make as many lists as you need and easily add to them. Set due dates and you’ll get alerts as deadlines approach. Check items off your lists as you go and keep track of what you’ve completed. And to be sure you don’t forget anything, iCloud keeps your reminders up to date on your Mac, iPad, iPhone, and iPod touch.

A feature for your thoughts. Notes in OS X Mountain Lion is designed for whatever’s on your mind. Think it up. Jot it down. Make it even more noteworthy with photos, images, and attachments. You can add, delete, and flip through your notes or do a quick search. Use the Share button to send your notes to friends or colleagues with Mail or Messages. Pin important notes to your desktop so they’re easy to get to. And take them with you everywhere. Notes works with iCloud, so when you create or edit a note on your Mac, it automatically updates on your iPhone, iPad, and iPod touch. 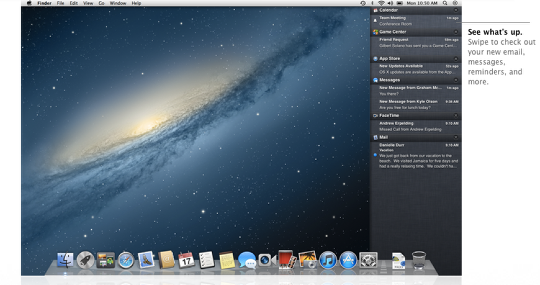 See what’s new with you. All in one place. Something new is always popping up somewhere on your Mac — an email, an instant message, a friend request, a calendar alert, and more. Notification Center makes it easy to stay up to speed, because there’s one place to see everything. Notification banners appear on your desktop and disappear quickly so they don’t interrupt what you’re doing. Swipe to the left, and you’ll see all your notifications in a simple, ordered list. So you’ll always know what’s up as soon as it comes up. 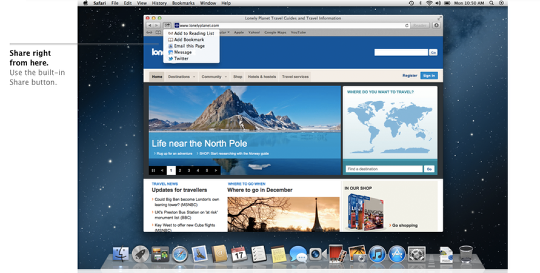 When you see it, share it. You’ll find the Share button in many OS X Mountain Lion apps. It’s the new, easy way to spread the word — links, photos, and videos, too. Send links from Safari. Send your notes via Mail and Messages. Post photos to Flickr. Send videos to Vimeo. And tweet just about anything. 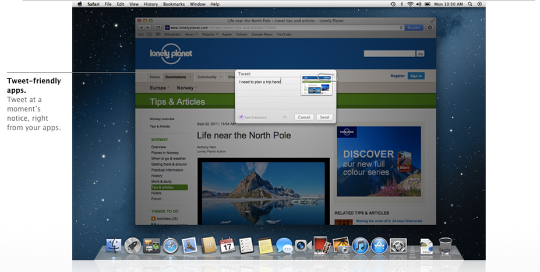 Tweet right from your apps. OS X Mountain Lion keeps you on top of all things Twitter. Sign in once and you’re all set to start tweeting — and you don’t have to leave the app you’re in. Tweet links and photos directly from Safari, iPhoto, or Photo Booth with the new Tweet Sheet. Tweet comments and add locations. And when someone mentions you in a tweet or sends you a direct message, you’ll get a Twitter notification right then and there.

Mac gets in on the game. The Mac is about to go up against iPad, iPhone, and iPod touch — in a friendly Game Center way.2 Now it’s a bigger playing field with even more competition. Just create a Game Center account with your Apple ID. Then sign in and you’re in. Friends will find you fast, and you’ll track them down easily. Get a multiplayer game started or go up against people you don’t know. Check out leaderboards and see how your high score ranks against opponents’ scores around the world. And discover new games based on the ones you and your friends already play. 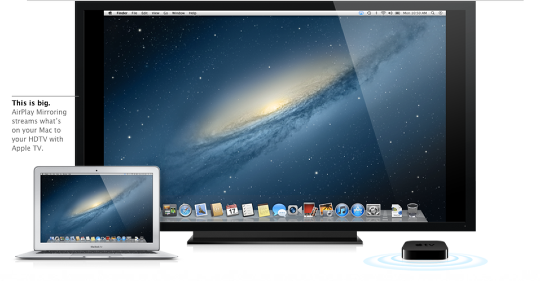 Your Mac is on TV. This new feature in Mountain Lion is made for an audience. With AirPlay Mirroring, you can stream what’s on your Mac to your HDTV via Apple TV. Show web pages and videos to friends on the couch. Share lessons with a classroom. Present to a conference room. It’s a big deal for your Mac. And for everyone around it. 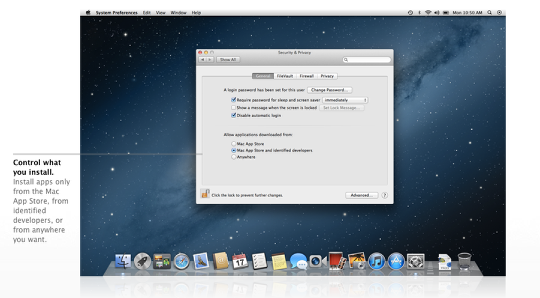 All New Features In China 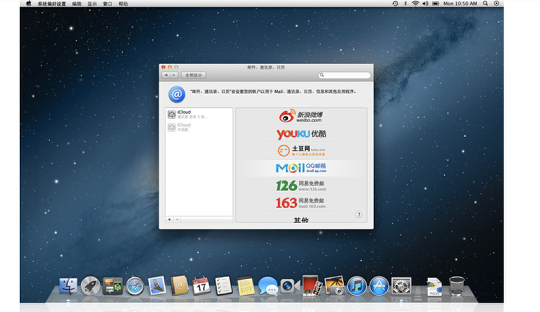 It’s a new Mac experience in China. OS X Mountain Lion brings all-new support for many popular Chinese services. And they’re easy to set up. Mail, Contacts, and Calendar work with QQ, 163, and 126. Baidu, the leading Chinese search provider, is a built-in option in Safari. The video-sharing websites Youku and Tudou are included in the new Share Sheets, so users in China can easily post videos to the web. They can also blog with Sina weibo, the popular microblogging service. And with improved text input, typing in Chinese is easier, faster, and more accurate.