We’re delighted to be working closer with The Impossible Project team as we continue to branch out and expand our reach with all things related to mobile photography. Analog post-processing of mobile images is becoming more and more popular and we’re going to make sure our readers are fully briefed on this very exciting development.

The Impossible Project is in many ways leading the way, but there is also a growing community of mobile artists and photographers experimenting with other analog post processing techniques in an attempt to make their mobile images stand out even more, in galleries, magazines and the like and we have viewed some outstanding images and techniques.

A good deal of my formal photographic training (many years ago) was spent in a huge college darkroom and it is an area that I’ve always enjoyed, I think you will too. I also had a very close working relationship with Polaroid built up through my years as Technical Editor for various UK photography print magazines/titles.

Today we are publishing the eighth of a series of ‘Impossible’ articles, this time with Meghan Davidson. Meghan lives in Lincoln, Nebraska, with her partner, Tony, and their Labrador retriever, Peter Parker. Originally from Baltimore, Maryland, she’s a psychologist who works as a faculty member at a large university. She’s also a licensed therapist, maintaining a small private practice. As she puts it, “Photography is what I do all the other hours of my days”

This is an interview that was conducted by the team at Impossible and they have given us kind permission to republish it here. We think you will enjoy this very much… 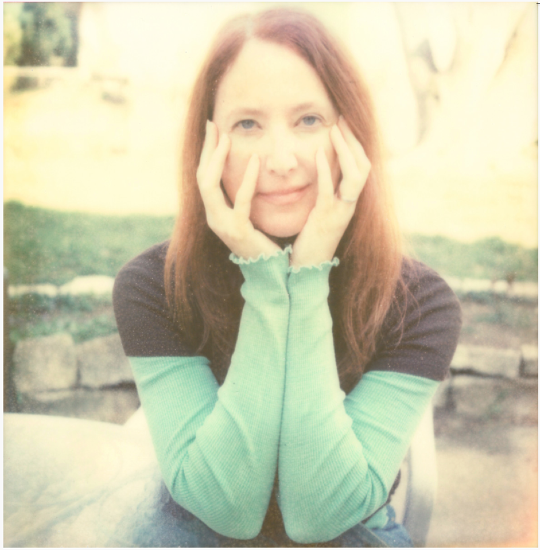 How long have you been shooting Polaroid/Impossible film?

I’ve been shooting Polaroid/Impossible film for about four years.

What cameras do you use?

Primarily. I use the traditional folding SX-70. That was really the first Polaroid camera I used when starting to shoot instant film. It stole my heart immediately. I love everything about it – the depth of field, the ability to control the focus, the chrome and leather, the design, and on and on.

I also use the Spectra quite frequently as I adore double exposures and appreciate the wider point of view this camera provides. In the last year, I’ve bought two SLR 680s and have been really enjoying shooting with them. I like the quicker focusing capability with the auto-focus option, and still get a great depth of field similar to the SX-70. However, my arsenal of Polaroid cameras keeps growing over time. I also have two pack-film cameras that have been a bit neglected of late.

Where do you shoot most often?

Given that it’s currently winter where I live, I’ve been shooting inside my house to keep the film and cameras at a temperature they prefer. Otherwise, I most often shoot around the town where I live. However, I LOVE to travel and some of my favorite photographs come from my trips because everything feels so new and fresh and different compared to the same-ness of my daily routine and surroundings. As I had a bit of a film-hoarding problem to deal with, I’ve now shot through all of my older IMPOSSIBLE films and am now shooting the new Color 600, B&W 600, and Spectra Color films. 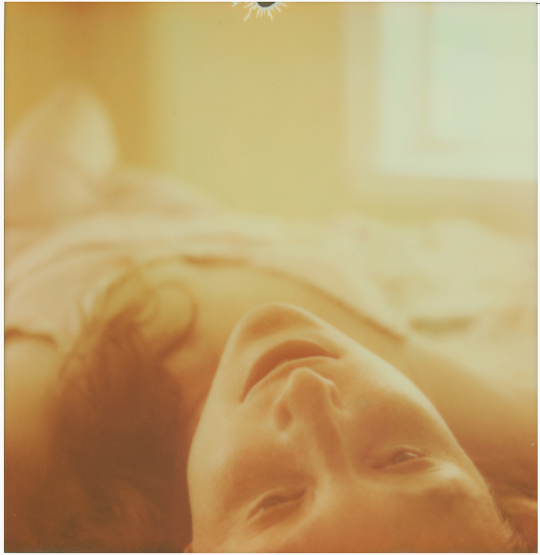 How would you describe your work?

My intention for my instant photography is to shoot images that convey some emotionality. I want to connect personally with the photographs that I take. That connection most often comes on an emotional level. This may be conveyed through the color or tones in the image that express a mood or feeling, the expression of a person’s face in a portrait, or the content itself which may evoke a nostalgia or timelessness. Ultimately, my hope is that the viewer connects to the photograph and feels some emotion.

In terms of inspiration, that comes in all varieties. There are times I deliberately seek out inspiration and times when it simply finds me. I’m inspired by color and shape and light. These elements are around me daily, I just have to pay attention (sometimes that can be a challenge with all the other parts of life tugging at me). I’m very inspired by decades past – particularly the 50s, 60s, and 70s – so any time I see old signs, typography, clothing, films, or hear music from those eras, I feel inspired and want to somehow translate that into a photograph. And then there are times when I truly seek out inspiration, often turning to other art forms including paintings and sculpture. I’ve had many photography ideas come to me when I’m waiting in line somewhere, driving, or attending an event. Seems like idle time, observing what’s around me, and letting my mind wander allow for inspiration to flow. 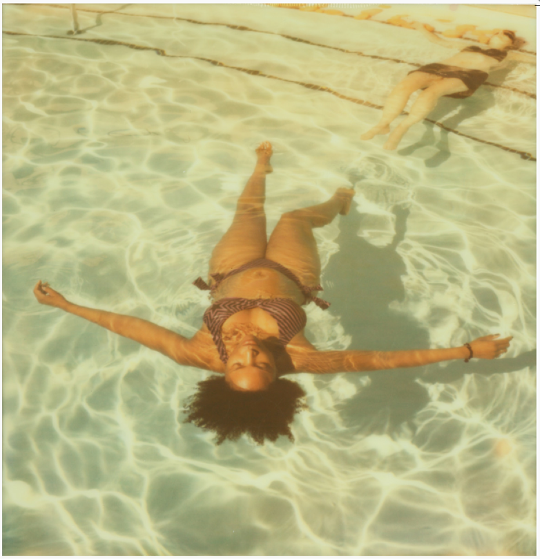 Tell us a little about the four works you have chosen as your favourites?

1. The first photograph is incredibly meaningful to me for a number of reasons. It’s the first self-portrait I ever took with my SX-70 camera. I love the depth of field of the SX-70, so I fell in love with self-portraiture with the SX-70 from this photo. It also holds a special place for me because it was chosen by the folks at the NYC Impossible Project space to enlarge and exhibit in the Out of the Blue show.
2. This photo of my friend, Sarah, represents the fun and whimsy that I want to feel more of in my daily life. I adore color and was so happy with how brilliant the reds and purples came through in this photo. I also like that we’re unsure when this photo was taken given the timelessness of the Converse sneakers and no other dated information in the frame.
3. The photo of a beautiful woman (inside and out) whom I met at a retreat makes me so happy. I love the vibe of this photo – the tones, the shadow, the bikini. It feels very 70s to me and I adore that.
4. The photo of the apron really conveys a great deal of who I am as a photographer. It shows my love of nostalgia, timelessness, vintage things, and quiet moments. 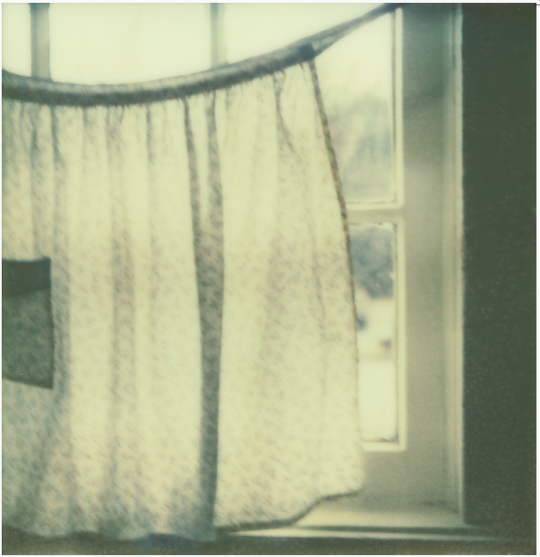 For someone just beginning to shoot instant film, I’d love to tell them to “stay with it and be patient.” I’ve learned that it takes time to really get to know the variety of different films out there, so I’d encourage others to be gentle with themselves and that process.


It also takes time to get to know the specific camera(s) with which you are shooting. For example, some cameras may tend to overexpose or underexpose the newer Impossible films, but you only learn this about a particular camera by working with it (as I’m doing right now with a new-to-me SX-70 Sonar). Sometimes with the older folding SX-70s and the SLR 680s, the mirrors inside may have moved a bit out of place over time. This translates into a mismatch between what you see in the viewfinder and the photo that results. You have to practice, shoot a ton, and learn each of your cameras to make adjustments like these. But if you hang in there, you will “get it” and you will fall in love with instant photography.

Do you have any upcoming exhibitions/publications?

Last year was a tremendous year for me regarding exhibitions and publications. As I said above, one of my IMPOSSIBLE photographs was enlarged and exhibited at the NYC Impossible Project space for the Out of the Blue exhibit. Additionally, I had four publications featuring my photography and writing in UPPERCASE, Artful Blogging, and Mingle magazines. My photography was also featured in the crowd-sourced book, This Is Happening, from Chronicle Books.


This year, I hope to secure a publisher for a memoir and photography book based on my current project, ’365 Impossible Self-Portraits.’ I would also love the opportunity to exhibit a selection of these self-portraits at the NYC Impossible Project space. 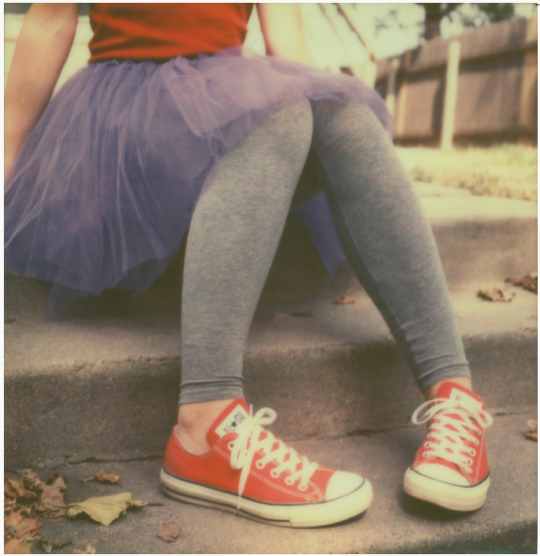 Who are your favourite photographers, living or dead?

Oh the list of favorite photographers is so long and ever-growing! I admire and have learned from the work of greats including Diane Arbus, Francesca Woodman, Dorothea Lange, and Imogen Cunningham. I’m also enchanted by Vivian Maier. In addition to these historic photographers, I truly admire the work of many fellow shooters in the instant film community. I’m constantly blown away and inspired by the photography I see in the Flickr pools associated with the Impossible Project.

What are you hoping for from Impossible during the next year?

In this coming year, I’m hoping for new Impossible film to test and try out. I’m also hoping that with all the advances the Impossible team is making with the films, that one of those will include faster development time for the photos.