Welcome to our Top Five Photo Apps – Photo App Lounge section of theappwhisperer.com. This is an area on our site where we ask highly accomplished mobile photographers what their top five photo apps are and why.

Today, we are featuring AlyZen Moonshadow’s Top Five Photo apps and they are really intriguing. AlyZen is a wonderful enchanting mobile artist based in Perth, Western Australia. Her current passion is for graphic design and in this post, AlyZen demonstrates that perfectly by creating visuals using her current favorite design apps. Over to you AlyZen… (foreword by Joanne Carter).

‘For this post, I’ll use just one example and show you what I’ve done with it.  My techniques are simple and only involve a few steps.  My favourite “graphic design” type Apps are as follows:

The original image in this example is a photo of the BHP Billiton building and the Australian Stock Exchange building on St Georges Terrace, Perth, Western Australia.  They are both made of beautiful blue glass. Don’t you just love the little twinkly lights in the Stock Exchange building?  For the secondary image, I chose a photo I’d taken of a craft paper with a leafy design on it. 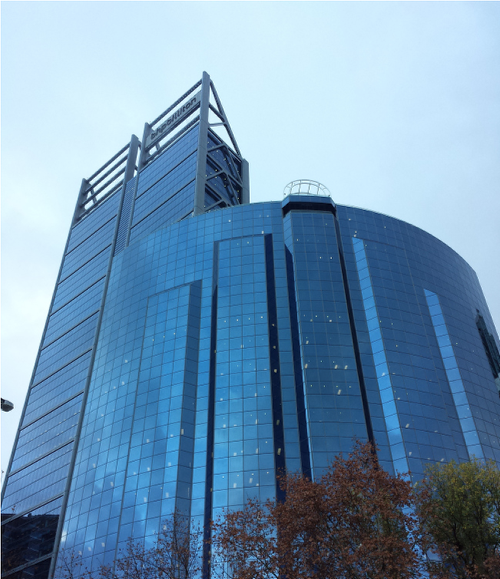 I took this image using my Samsung Galaxy S4 one winter’s morning.  The above image is as unedited.  Just the other day folks on the grapevine were raving about an iOS App called “Leonardo”, so out of curiosity I decided to try it out.  It just might become my favourite go-to iOS App, as it has certainly more features than PhotoShop Touch.  I might even write a review of it if I have the time.

In the App “Leonardo”, I added texture, adjusted the brightness and contrast, and then using the Screen Blend mode blended the image of the buildings with my leaves image.

After processing with the app – Leonardo (link above) 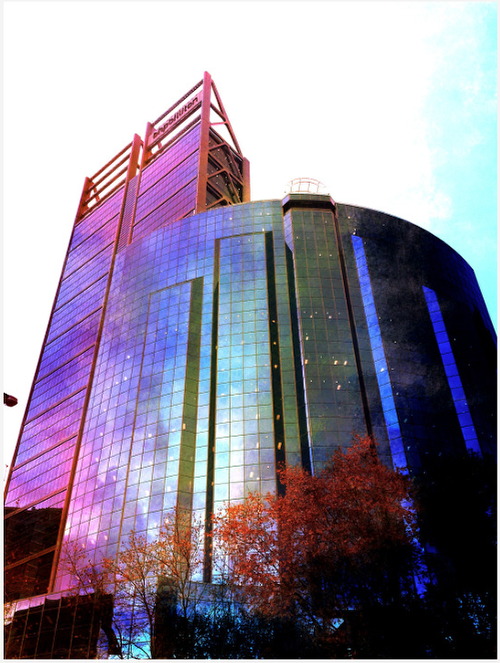 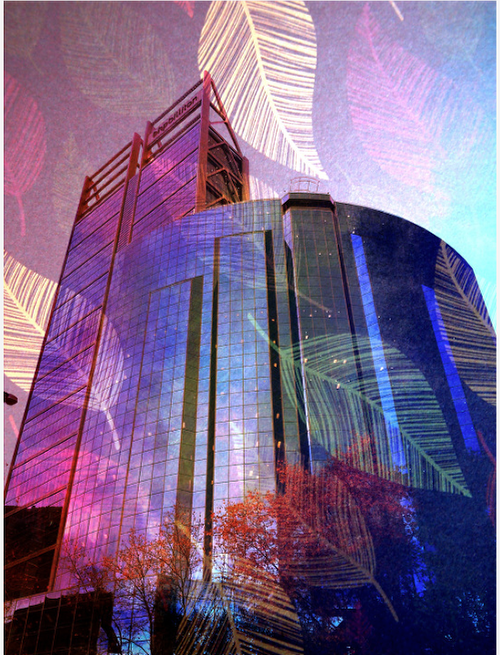 I then used the equally awesome App “Tangent” to create 4 different versions of the image.  Just to give you an idea of what that App is capable of. 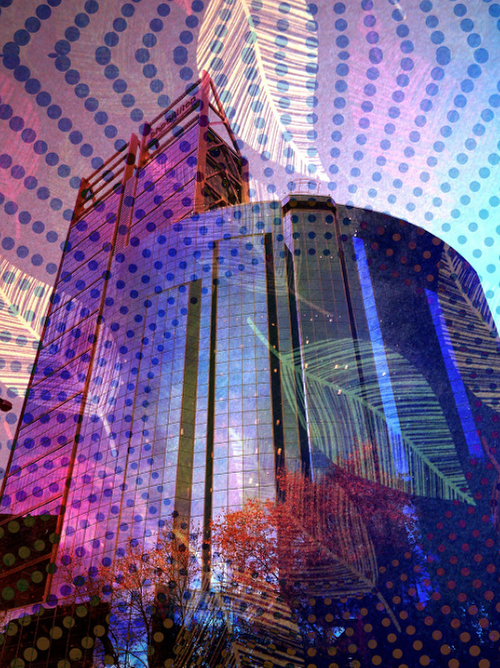 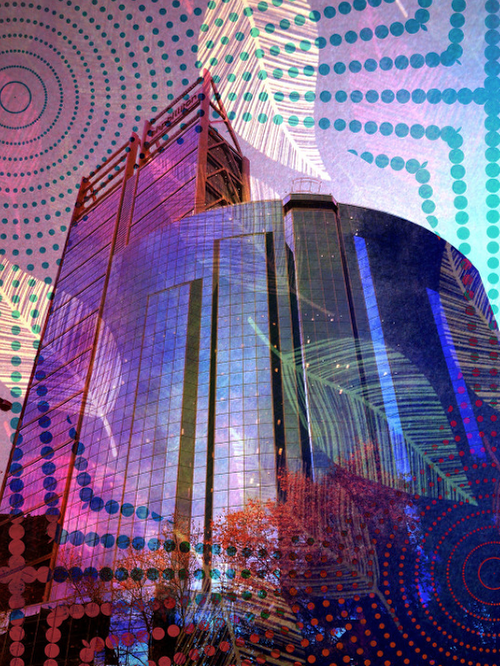 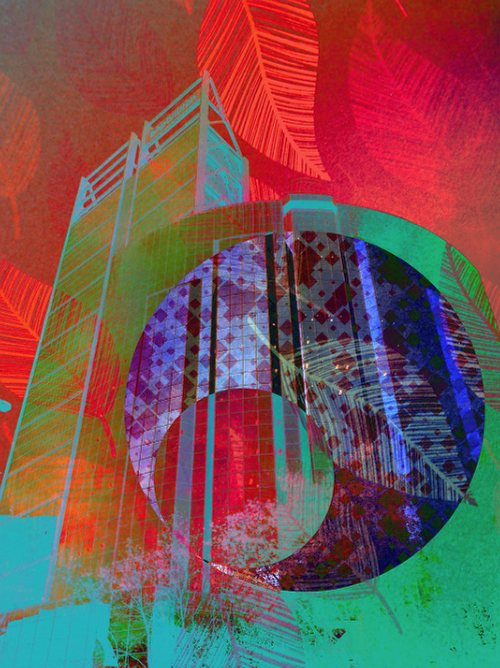 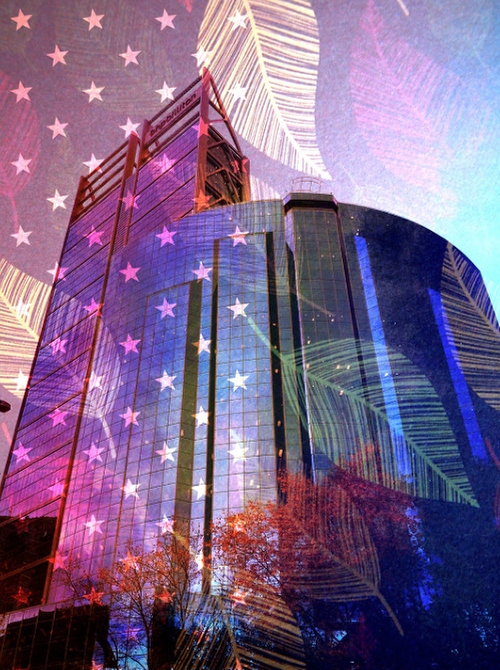 Next, I took one of the above images and ran it through another favourite App, “Phoster”.  For a long time I believed Phoster to have only a few set graphic design templates, but since then I’ve discovered more folders with additional templates, which has made me appreciate the app all over again.  Here I simply added some text in 2 different fonts, saying “Perth City” and “Australia”. 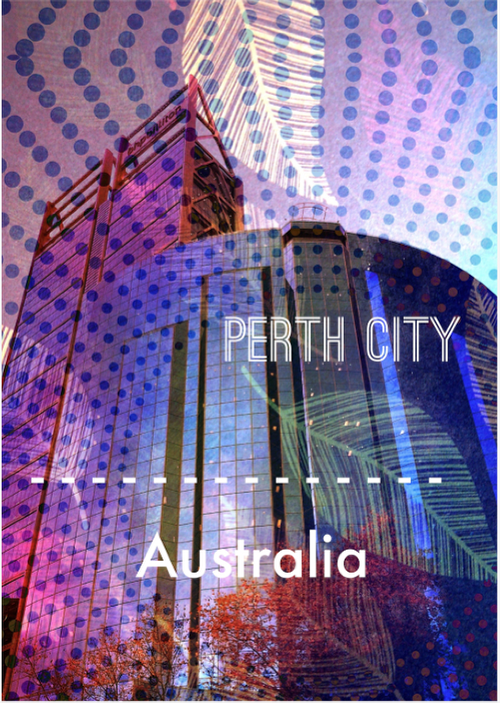 The reason I’d created four different versions of the same image in Tangent, was so I could them all in the App “AddLib U”, which, alongside “AddLib S”, is my favourite graphic design-style App.  To use AddLib U, you simply load 1-4 images (obviously the more the merrier here) and then click the go button to generate 10 random images, a la Swiss graphic design.  The only tweaking available is before you hit the go button, where you can adjust the position and size of the images.  And once the ensuing 10 images have been generated, the only tweaking you can do is to modify or delete the text.  Here are 3 of the 10 images the App randomly generated; I have changed the text in 2 of them, and deleted the text of the third. 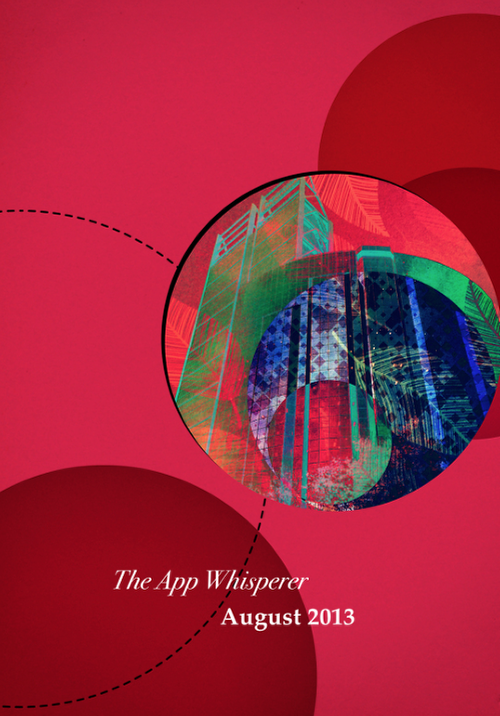 AddLib U with Text No.2 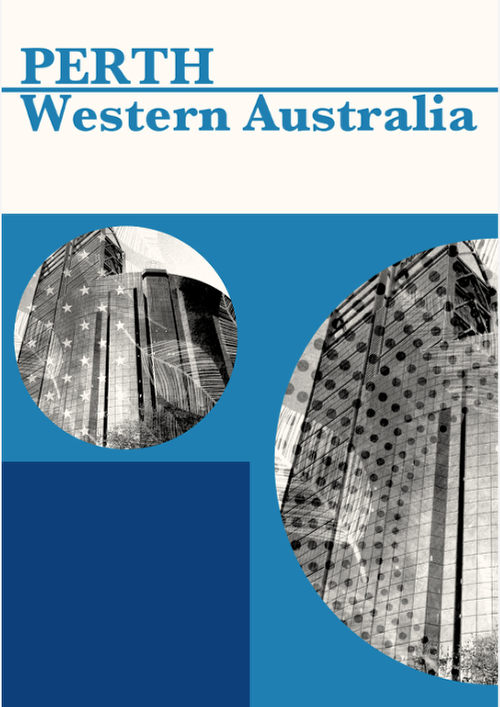 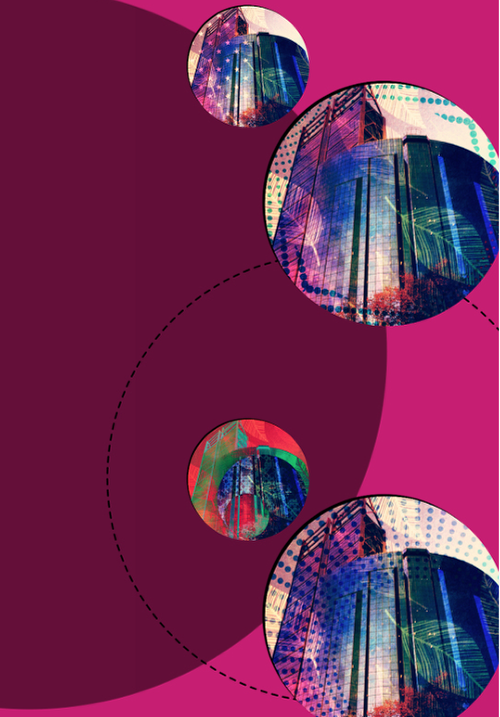 Another favourite App I use is “Phonto”.  As with “Phoster”, subsequent updates meant the App got better and better.  Last time I looked at Phonto, there were new templates I’d never used before.  So, for the following image I applied a 3-coloured strip to the original Leonardo image, the one before I blended it with the leaf image.  I also added some artful dotted lines and music equalization bars at the bottom of the image. 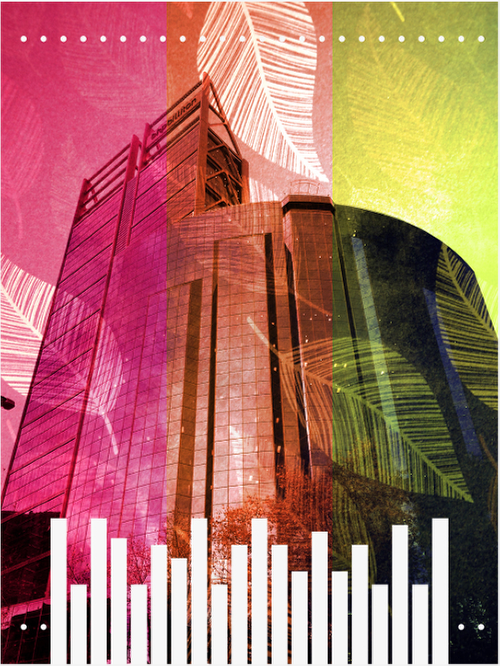 Another go-to App I use is PhotoShop Touch (link above), which is very handy as it’s available on iOS and Android.  I use it mainly for blending purposes, as the Android market is sadly lacking in that department.  Here I used the “stars” effect image previously obtained via Tangent.  I created a bulge effect in the middle of the image, and added a “posterise” and “watercolour” effect and also changed the hue’. 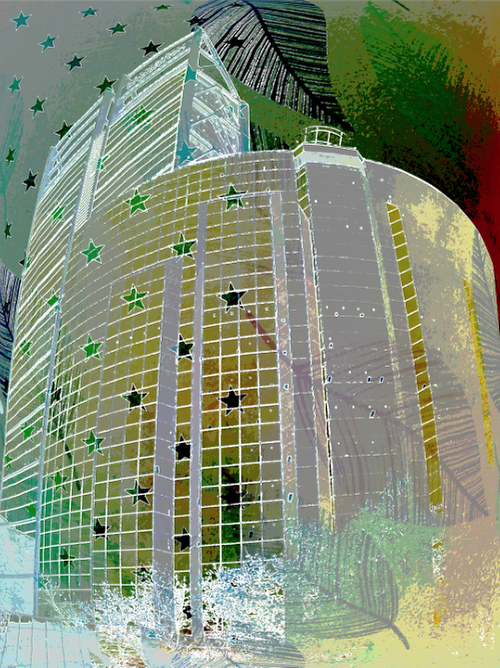 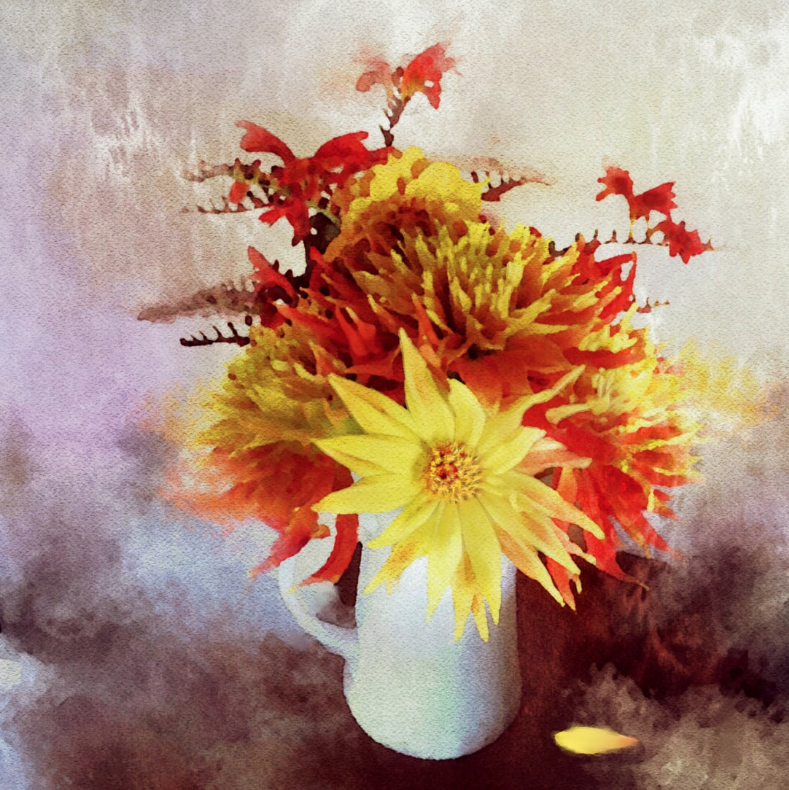 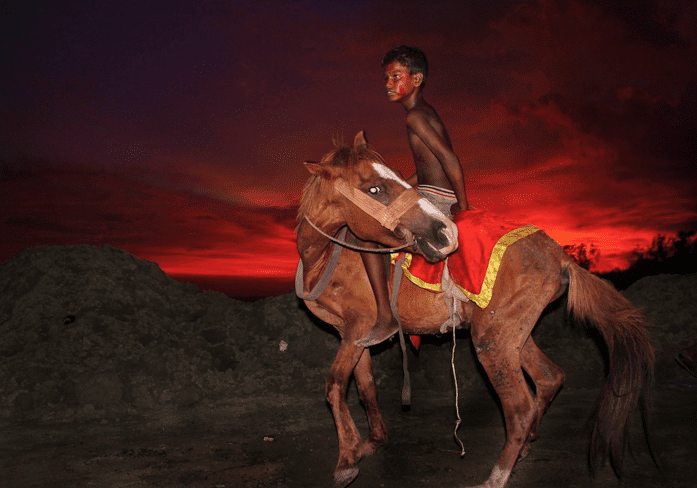 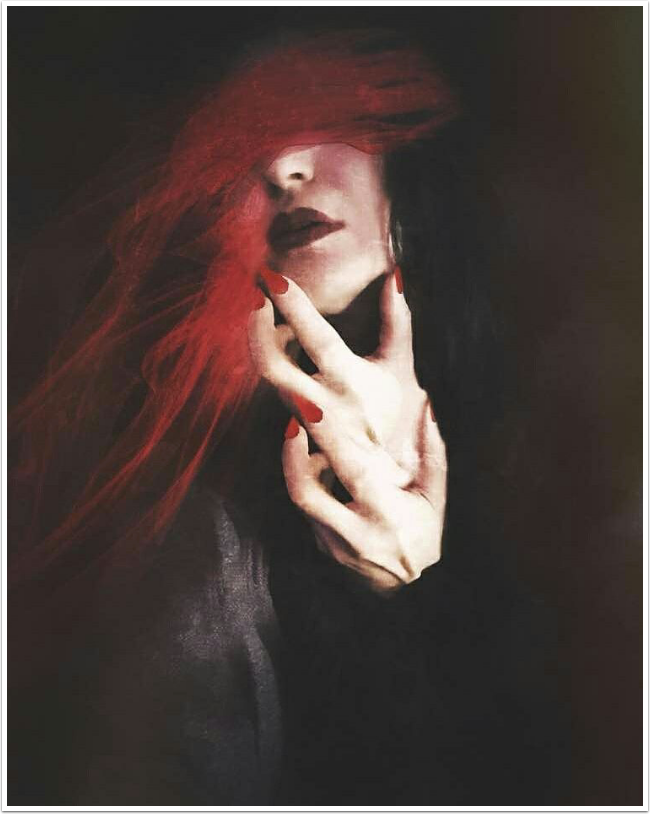