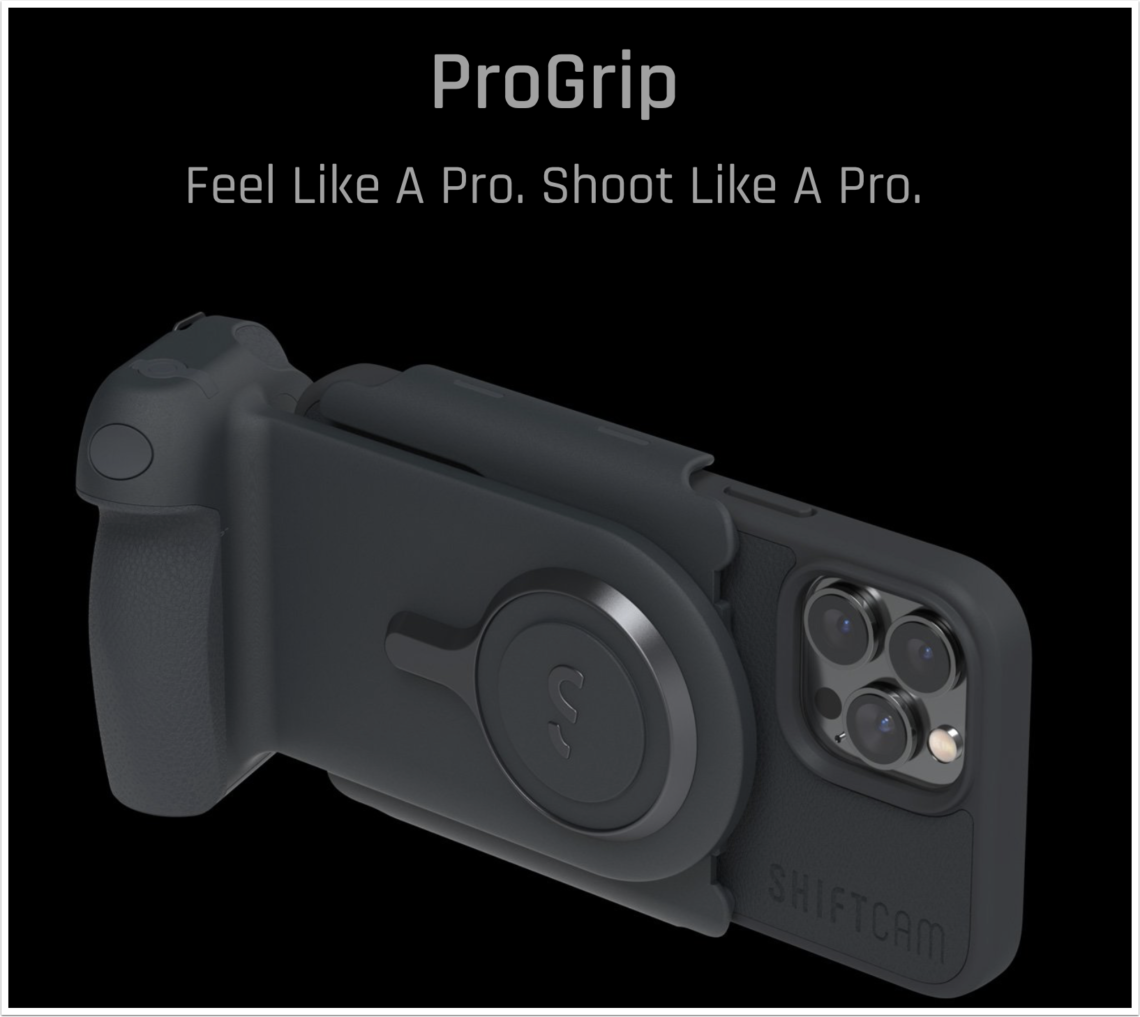 We are delighted to publish our highly accomplished Columnist and Award Winning Mobile Photographer and Artist Rad Drew’s first impressions of the new ShiftCam ProGrip and ProLens Kit Box that has been produced and well engineered with an ergonomically satisfying grip for the iPhone (and other smart phones).

The ProGrip Starter Kit comprising of a ProGrip, 1.5m USB-C cable, pouch, hand strap, cold shoe mount and adapter is now available from Amazon and ShiftCam for £129.99/$149.99/€149 in charcoal and ash. ProGrip is designed as a camera-like grip that allows users to securely and comfortably carry and shoot on a mobile phone.

ShiftCam, a global mobile photography accessories company, has announced the launch of their latest product, the ShiftCam ProGrip which is set to be a game-changer in mobile photography for both enthusiasts and professionals. Following an incredibly successful Kickstarter campaign in 2020 which raised over $700K, the ProGrip Starter Kit comprising of a ProGrip, 1.5m USB-C cable, pouch, hand strap, cold shoe mount and adapter is now available from Amazon and ShiftCam for £129.99/$149.99/€149 in charcoal and ash.  ShiftCam was also nominated as an honoree of the 2020 CES Innovation Awards and prior to that, the company was honored as a recipient of the 2018 Red Dot Design Award winner and CES Innovation Awards winner. 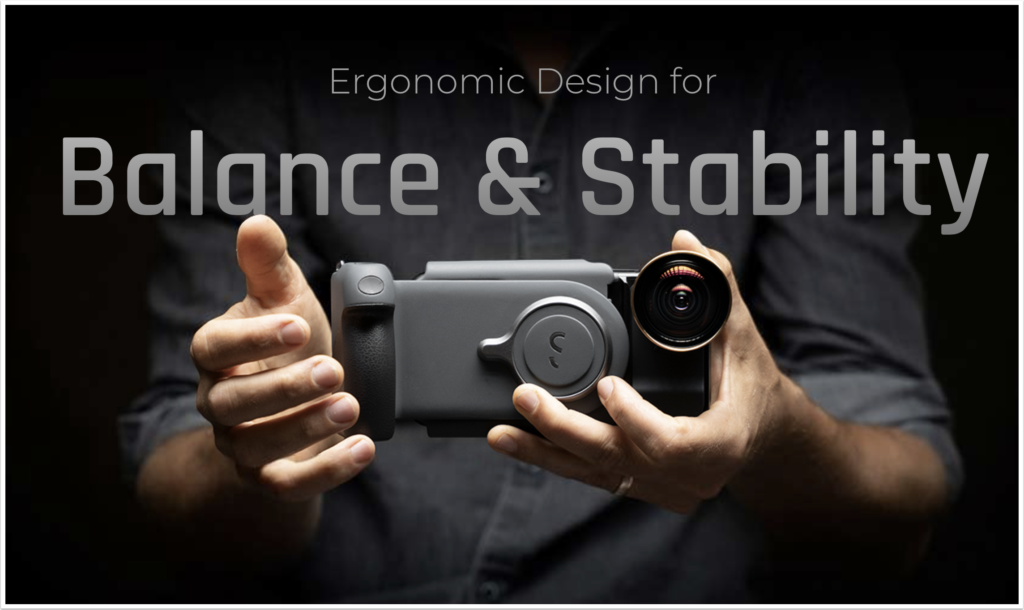 Now there’s a phone grip that is substantial, well designed, soundly built and feels great in your hand! It works with BlueTooth and has rechargeable batteries that will charge your phone if it gets low on juice. The camera can be set to vertical or horizontal orientation, and the device serves as a phone stand with both horizontal and vertical positions. Take a look at Rad Drew’s video below.

ProGrip is designed as a camera-like grip that allows users to securely and comfortably carry and shoot on a mobile phone.  Bring back index finger shooting as, with a built in Bluetooth shutter button, it is easy to click and photograph as with a traditional camera.  ProGrip also doubles as a Qi wireless battery bank which can charge a mobile phone during shooting so always ready and charged for the next adventure.  With a universal fit and a built-in pivot rotation, ProGrip can be seamlessly snapped onto any device and rotate to take the perfect shot. Users can thus switch from landscape to portrait without changing the grip position of the hand.

In addition, the designers also incorporated features such as cold shoe mount and tripod screw to the grip, allowing photographers to attach any favorite gear to complete the ultimate mobile photography and videography experience. As a bonus feature, ProGrip can also be used as a charging hands free dock for those Netflix marathons.

With the launch of the ProGrip, ShiftCam is on the rise to become one of the trend setters of the Mobile

Photography Industry.  To stay ahead of the game, the ShiftCam design team went back to its photography roots to understand what is missing from the picture. 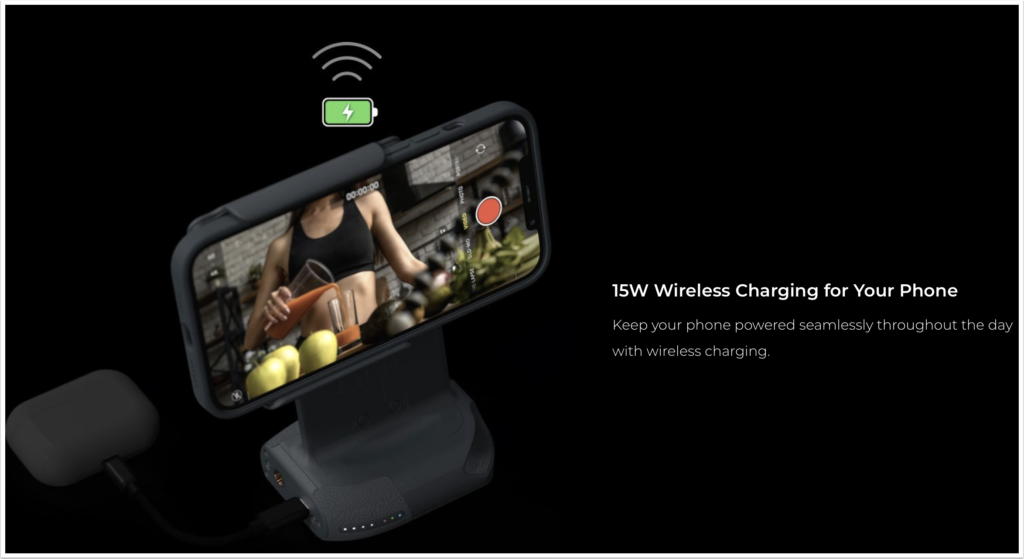 The designers recognized that one of the major differences experienced when it comes to shooting on a mobile phone is that it just doesn’t provide the security and balance of a traditional DSLR camera; especially while shooting for long periods of time across different locations.

That is why, during product development, the ShiftCam team concentrated on creating something that focuses on comfort and functionality to further optimise the mobile photography and videography experience.

The aim was to create a product that can close the gap by combining the accessibility and convenience of a mobile phone, along with the familiarity and control of a traditional camera.  Thus, the creation ofProGrip, an innovative reassuring ergonomic battery grip for your mobile devices.

“We started ShiftCam with the aim of giving people the tools to take excellent quality photographs on the move, capturing those precious moments in our lives. Whether that be a child’s first steps, a bride walking down the aisle or a breathtaking sunset ShiftCam offer ergonomically designed photography accessories    to make snapping a photograph, a selfie or Instagram story an absolute breeze.” said KL, founder and CEO of ShiftCam.

“Even for the keen photographer, accustomed to carrying back backs full of heavy camera equipment, the ShiftCam accessories enables great quality photographs when that unexpected moment occurs that just has to be captured.”

Over the last three years, the ShiftCam team has worked diligently to perfect their products. Their previous campaigns include the MultiLens cases for iPhones, as well as the ProLens Series which feature 6 distinct professional grade lenses that can be attached to mobile phones.  Also, ShiftCam has also been recognized by well-known media such as Mashable, CNET, Forbes, and Tom’s Guide.  With the launch of ProGrip, ShiftCam will establish itself as one of the industry’s top players.

As the years passTheAppWhisperer has gained readers and viewers and found new venues for that exchange. All this work thrives with the support of our community.

Photography has always been synonymous with fun and magic. As a kid, it was fun to compose, fun to capture, magic to develop and process, and fun to share. It was fun to seek out photos and to engage people, and magic to travel to new lands or find the unusual in familiar places. It was magic to convey an emotion or make a point and touch others through visual imagery that I created. As an adult, photography continues to be more fun and magical than I ever dreamed! Despite changes in technology that have occurred during my lifetime, the esthetic of photography remains much the same. The creative mind of the photographer is still the most important element in a great photo. The camera doesn’t create a photograph any more than a hammer designs a building; it’s merely a tool that allows us to create our vision. Today, my camera bag holds two mirrorless cameras, an infrared camera, a point-and-shoot, and the iPhone 7 Plus and iPhone X. Of these tools, I credit my use of iPhones since 2010 with providing more opportunities to practice the esthetics of photography, making me a better photographer regardless of the camera I'm using. And photography has never been more fun and magical! Today, my business consists of teaching photography face-to-face and online, and leading tours for mobile and traditional photographers to photogenic locations around the world. • Visit my website (http://www.RadDrewPhotography.com). • Subscribe to my YouTube Channel (http://bit.ly/2inDez8_RadYouTube). • Watch for my regular mobile photography column in Luminous Landscape (https://luminous-landscape.com). • Subscribe to RadDrewPhotography Newsletter (http://bit.ly/1Z0prlX_RadDrewPhotographyNewsletter) for news, and photography tips and tricks.