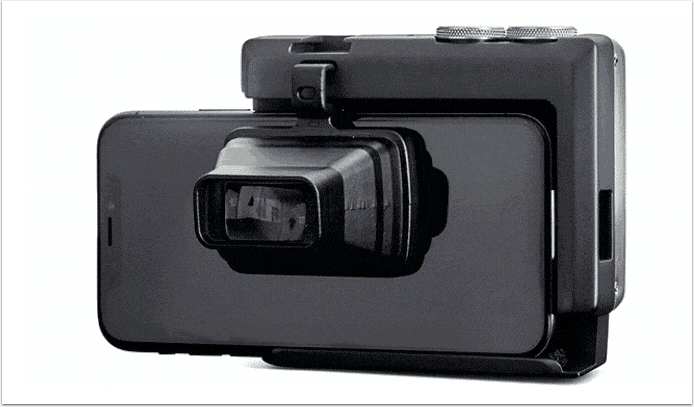 We’re always interested to learn about innovative mobile photography projects and this one from Miggo sounds particuarly interesting. They’ve developed a product, called the Pictar Pro that bridges the gap between a phone’s power and camera’s usability with a wide set of physical controls and software features. The cherry on top is the phenomenal user experience: a pleasure-to-touch polished metal grip and an unmatched front-loaded intuitive user interface.

There’s a feature that particularly interests me, that’s the Pictar Pro Viewfinder. If you’re used to looking through camera viewfinders, or just find your smartphone screen too hard to see in bright light, then this could offer a great solution.

The Picture Pro has been designed to work with all smartphones, both Apple and Android, it’s an interesting concept. Their initial goal on Kickstarter was £19,074 but they have by far exceeded that with £142,135 pledged (at the time of writing) and with 36 days still to go.

You can learn more about this project here.

Lume Cube have already succeeded with their Life Life small portable light Kickstarter campaign. With 30 days to go and $61,360 (at the time of writing) pledged, from a goal of $33,000, this is one light that we expect to see in the flesh very soon. (It took only 29 hours for this goal to be reached).

It’s smart, it will sync to your iPhone or Android device via a simple Bluetooth powered app. The app gets smarter, it allows you to remotely adjust the settings to help you capture great images up to 90 feet away. It is waterproof up to 10 M. Chargeable via micro USB and will connect to iPhones, Android phones, digital cameras, video cameras and GoPro. This device will start shipping February 2017. Trademarks and Patents have been filed.

If you would like to support or learn more about Life Lite by Lume Cube, just go here.

I am very pleased to learn of this exciting Kickstarter project of iPhone Photography Cards. Essentially they are flashcards for iPhone photography enthusiasts. The deck includes 10 knowledge and 40 task cards. The concept is to combine both types of cards to obtain one photography challenge – there are 400 possibilities!

This project has been created by my friend and fellow photographer Jack Hollingsworth as well as Killian Kunz a graphic designer and photographer.

They are hoping to raise €10,000 and have 30 days to go. You can read more and back this project by clicking here.

This is an interesting enterprize that I have recently been sent details of, this project revolves around the specific theme of Paris, concentrating on a body of photographic work covering life in all 20 arrondissements (districts) of the city. The work will be exhibited under the title ‘Lomosapiens’ in a gallery located in the South Pigalle district of Paris in October of this year.

Combined with signed limited photographic fine art prints, a selection of 5 images will also be printed in a limited run on Savakas T-Shirts and Tote bags. Renowned for their quality and domestically produced garments, the images are printed on t-shirts designed in-house, assuring the finest fabric and fit.  All proceeds will go towards funding the exhibition.

This is a Kickstarter project, if you would like to find out more, or back this project, please go here.

We were inspired to learn about this new Olloclip Kickstarter campaign, called the Olloclip Studio for the iPhone 6 and 6 Plus.  The olloclip Studio system is the combination of an all-new, more protective case design that incorporates an integrated mounting solution (patent pending) and a series of mobile photography accessories. Both the case and accessories are designed to intuitively work together the moment you pick them up. Unlike many of today’s modular mobile grip systems, olloclip’s Studio components seamlessly work together so you can focus on capturing the opportunity in front of you and not on building a rig.

The olloclip Studio Accessory Kit includes an ingenious two-finger universal grip (you’ll never hold your iPhone the same way again), a convenient Kickstand, a set of ¼-20 mounts to attach a tripod, grip or handles (for both landscape and portrait orientation), and a set of cold-shoe adapters for lightweight accessories like a microphone or light.

The goal for this Kickstarter campaign is $100,000 with 29 days still to go, the manufacturers have already been pledged $42,526.  If you would like to contribute or learn more about this campaign, please go here.

Thomas Hurst is an admirable man and one that I am very pleased to know and call a friend. Originally, he was introduced to me by one of our Columnists and also good friend, Kevin Kuster – former Senior Photo Editor for Playboy Magazine.  Hurst created the COVR lens case and launched a hugely successful campaign via Kickstarter last year for the iPhone 5 raising over $85,000, today he has launched a new campaign for the iPhone 6, you can read more about that here.

I have been intrigued by Hurst for sometime, and wanted to learn more. Within this conversation, mostly in his own words, Hurst takes us through his experiences of becoming, enduring and surviving being a war photographer. He talks us through his devastation of his wife’s colon cancer diagnosis late in pregnancy and the subsequent loss of his son. He talks about the motivation for creating the COVR Photo Lens – it may not be what you’re thinking and he discusses the production process of this great product.

I am suitably humbled to publish this conversation and thank Thomas from the bottom of my heart, for sharing so much with us today. I wish him every success with his new Kickstarter campaign. Please, enjoy…

We are very excited to report that the brand new Kickstarter campaign for the iPhone 6 COVR lens case has just launched. Thomas Hurst is the creative genius behind this fantastic product. An award-winning photojournalist for almost 20 years, Thomas captured photographs in some of the most dangerous places in the world. Thomas’ work has appeared in such publications as Time magazine, The New York Times, and The Boston Globe. Among his many nominations and awards, Thomas has earned three World Press Photo awards, “Photograph of the Year” from Editor and Publisher magazine and was a finalist for the 2000 Pulitzer Prize in Breaking News Photography while at the Seattle Times for the photo staff’s coverage of the World Trade Organization Riots in 1999.

The COVR Photo Camera-Lens Case is a U.S. patented protective iPhone case with a built in sliding camera lens which allows anyone who takes pictures with their mobile phone to capture candid moments of the world around them. The COVR Photo mobile phone case is a one off photography tool that helps us make better, more natural – not posed – pictures of friends, family, our children or those we meet in life’s travels and adventures. Through it’s unique design and the high-quality prism which we built directly into the case, COVR frees you to take pictures more easily with one hand and with more subtlety because you can hold your phone in various angles and positions and NOT just in front of your face.

Take a look at this fabulous KickStarter by Jay Desind, in his own words: “everyday is the culmination of a photographic and artistic odyssey that began when I bought a one way ticket to Singapore. My intent was to travel for about two months and then return home.

I never made it back home.

Over three years later I’ve traveled to over 30 countries and taken over 160,000 photographs. Two books of photography and poetry and an ever expanding audience on social media led me to the idea of producing a quality hard cover book.

This book is over 750 pages of photography and inspirational stories or poetry. Every photo shared in the book was taken and then processed on the iPhone…”.

The target for this project is $15,000, currently Jay has been pledged $735, let’s see if we can help get that up.  To find out more about this inspiring project, go here.

Here’s a really wonderful inspirational project that I thought our readers would like to learn about. It’s an ongoing portrait photography series combining petals, it’s really beautiful. Tal is a Fine Art Portrait and Fashion photographer, this project displays feminity, inner power, fragility, strength and sensuality – I use these words day in and day … Read more INDIEGOGO – The Petal Project