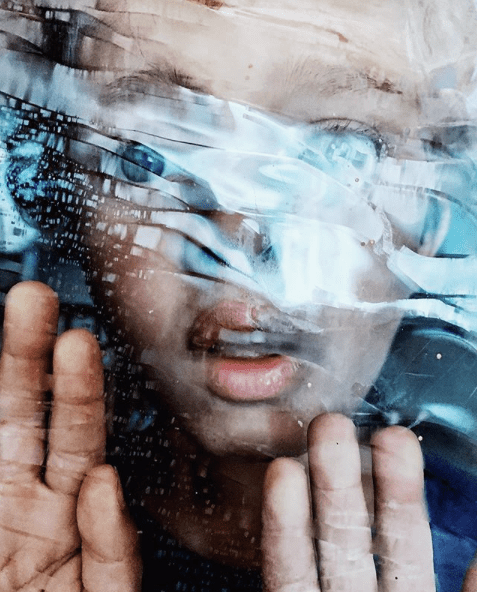 Joné Reed is a London based photographer. Her instagram account is mainly focused on portraiture, primarily sequences of dark and grainy shots, playing out like a movie but also intertwined with colour imagery, laying bare a story of intimacy. Allowing the viewer to observe the relationships between her subjects, depicting family members with all the complexity that that brings. We view emotional discoveries, moments of calm and deepness, quiet and introspection. This is more than a personal visual diary, Reed realised she was giving shape to her own childhood memories and at the same time portraying generations evolving over time, on connected poetic and tender journey.

Jone Réed explains in her own words “I’ve started using photography as a medium to liberate myself of some personal daemons when I was younger –  there was a vacuum to be filled and photography became some sort of a life buoy and now its something that partly defines me as a human being.

(click on each individual image to view a larger shot)

I am delighted to launch a new section to TheAppWhisperer today, entitled ‘Spotlight’ – I, like many have been inspired by the creative vision of Susan Rennie’s cafe portraiture photographs. Rennie has been building a steady pictorial record of candid images and each time I view one, it stops me and makes me think… I love that! I view a lot of images everyday, it takes a lot to stop me.  In fact, the images that Rennie has captured made me think very deeply one night recently, so much so, that I was inspired to create this new monthly series, Spotlight, where I will feature one mobile photographer or mobile artist and their accompanying work.

In this portrayal series, Rennie’s approach is critical, none of the models are aware that she is taking their photographs, seizing their private moments. She exploits the freedom that the Apple iPhone gives her to capture the dynamic inhabitants of her local coffee shop in California and creates a fascinating visual insight into their lives.

I have asked her for more information, her ‘behind the scenes ethos’ and her bio, so we can all get to learn a little more about her. I have created a video showcase of the cafe portraits for you to enjoy.

Rennie explains thus:  “One of the great challenges of portrait photography is the self-consciousness of the subject, who invariably presents a public persona to the photographer. With some street photography one can grab a fleeting image that momentarily penetrates the outer mask  at least until the person becomes aware of the camera. But how can a photographer make a candid shot, with a different truth, from extended observation?  Sitting in my local Venice cafe I thought how I would like to photograph the expressions, gestures, body language of my various fellow patrons, making a portrait that observed the inner persona  the candid persona that provokes a story for the viewer. The simple answer was that using the iPhone I had in my hand I could become a modern participant-observer. Made possible by the thoroughly modern technology of the iPhone I’ve made my cafe my community/ studio, and the stream of people at the small tables across from me my fellow participants/ sitters. Like the other patrons, I am absorbed in my iPhone: reading news, checking emails, getting the latest on FaceBook  but also taking photographs. As Meri Walker, an inspired mobile photographer, commented about this project: This is an ethnographic portrait of the Abbot’s Habit tribe”.

Rennie’s Bio: “I began taking photographs in the late sixties during my doctoral candidacy at Columbia University. In 1970 my photographs of museum goers were used to illustrate the Museum of Modern Art Annual Report. The next year I studied with Lisette Model, whose street photography had completely seduced me. Photography was much more attractive to me than political philosophy, but life intervened with the advent of the Women’s Movement, taking me in a different direction than art. After a long career as an academic and women’s health activist, I retired and resumed my long dormant true avocation  photography  and launched myself into the digital world. Having lived in Venice, California, since 1976, when I retired three decades later, I decided to take this historic, idiosyncratic, eccentric community as a subject for my photography resulting in three gallery exhibitions focusing on life in Venice. But then, in 2011, my relationship with photography changed radically when I began using my iPhone 4 as a camera. Reading about the Hipstamatic app in the New York Times, I started making photographs that I found much more creatively gratifying.  I was boosted to a second stage of revolution in March 2013 when I discovered photographic social media in Hipstamatic’s Oggl. A year later, in April 2014, I experienced what I see as my great leap forward: the discovery of the App Whisperer, the universe of iPhone apps, and the global community making mobile art  starting my participation in the generation of a new art form”.