Flurry Analytics provides accurate, real time data to developers about how consumers use their mobile applications, as well as how applications are performing across different handsets. Application developers receive anonymous, aggregated usage and performance data, as well as robust reporting and analysis tools. With this data, developers can identify issues and opportunities, create a more informed product roadmap, increase retention and grow their user base.

As well as that they also conduct regular market surveys and have created an outstanding one, as seen below. It is fascinating, we strongly recommed you read this information, whether you’re an app developer or app user it will be of great interest.

To find out more about Flurry and to sign up to their free analytics programe, just go here. 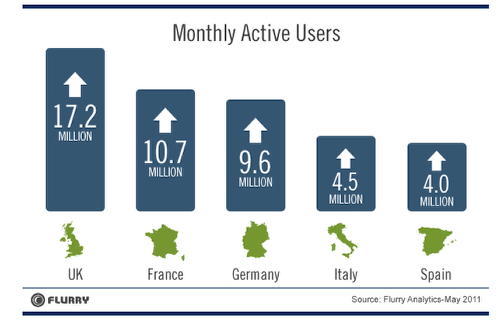 The chart above shows the number of people actively using apps on their smartphones in May 2011 across the top five European markets.  Flurry calculates active smartphones by first measuring its own penetration across these devices via apps into which Flurry Analytics has been integrated.  For example, Flurry detects roughly 85% of all iOS and Android devices worldwide.  They then grossed this number up, by country, for their estimates.

Combined, the top five European markets – the UK, France, Germany, Italy and Spain – actively use apps on 46 million devices each month.  With a combined population of just over 240 million, for ages 13 and over, the addressable market through smartphone apps averages approximately 20% of the largest, most affluent European countries.  Additionally, with a month-over-month growth rate (Compounded Monthly Growth Rate, CMGR) of more than 10% over the last two years, we project the installed base of smartphones will more than double over the next 12 months alone.

In the chart below, Flurry show the smartphone app audience as a percentage of each top European country’s population, again ages 13 and over.  The UK leads in penetration with a whopping 33% of its population using apps on smartphones per month.  France places second with a sizable 20%, next followed by Germany, Spain and Italy coming in with 14%, 9% and 10%, respectively. 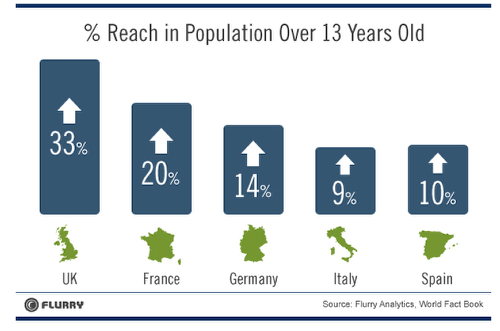 After having established the percent of each country’s monthly population that can be reached through smartphone apps, Flurry next looked at the pace of smartphone adoption, by country. 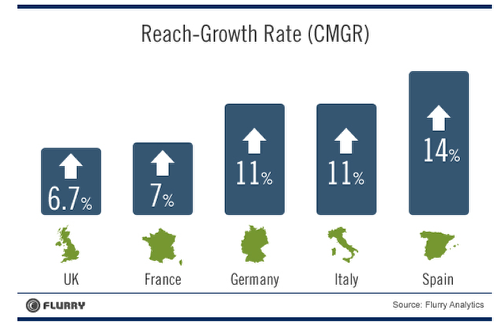 The chart above shows just how quickly the base of devices running smartphone apps is growing by country.  While the UK and France are the most penetrated to date, as a percentage of their countries’ populations, the laggard countries are closing the gap in terms of growth.  Spain leads in growth of its active smartphone user base with a monthly growth rate of 14%. Germany and Italy’s active smartphone bases are both growing at 11%.   Additionally, France and the UK continue to grow, month-over-month, by 7% and 6.7%, respectively.

With growing adoption of iOS and Android-based smartphones, the imminent release of Nokia phones based on Windows Phone 7, and the fact that the majority of consumers actively use applications, Flurry predict that the growth of this mass market media channel will continue to grow until near total smartphone market saturation.   To underscore just how aggressively this channel is growing, if we assumed the growth of smartphone adoption continued at their current rates, all five countries would have full smartphone penetration in just over two years. 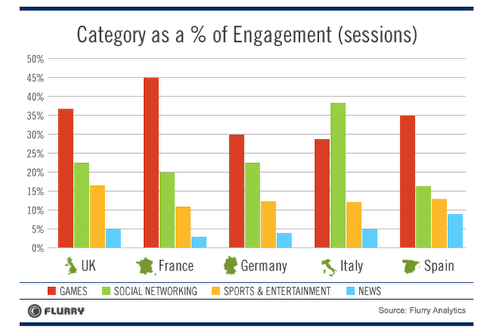 Flurry tracks the total number of application use sessions, from when consumers start app sessions to when they end them, and groups these sessions into categories such as games, news and travel.  The top categories ranked by session usage worldwide are: Games, Social Networking, Sports & Entertainment and News.

Comparing each country’s proportion of usage by category, more consumers play games in France than compared to other countries – a massive 45% of all French app sessions are Games.  In Spain, a greater percentage of the Spanish population consumes news compared to other countries, and the UK leads in relative Sports & Entertainment app consumption. In all 5 countries, the 4 top categories make up 80% of all traffic 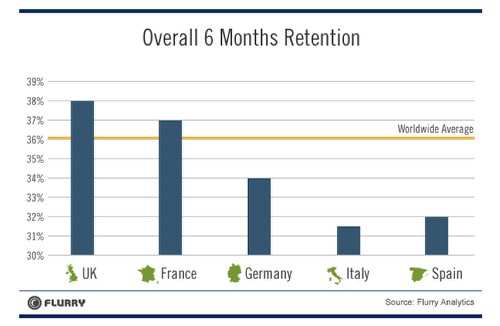 In May 2011, the average worldwide 6-month retention rate for all apps was 36%.  In other words, of all consumers who downloaded an app over the last six months ago, 36% had used that same app within the last 7 days of May (Flurry looks at “last 7 days” for its retention metric).

Reviewing the chart, Flurry noted that the UK leads in retention with 38%, followed by France at 37%, Germany at 34% and then Spain and Italy at 32% and 31.5%, respectively.  Generally, we see a correlation between the maturity of a given market and app retention.  Flurry observed that consumers typically try several apps before they settle into using a group of favorites, which they then use several times per week, even per day.   In less developed countries, we often see much more app experimentation.  The five countries they reviewed for this report are clearly all highly developed economies. 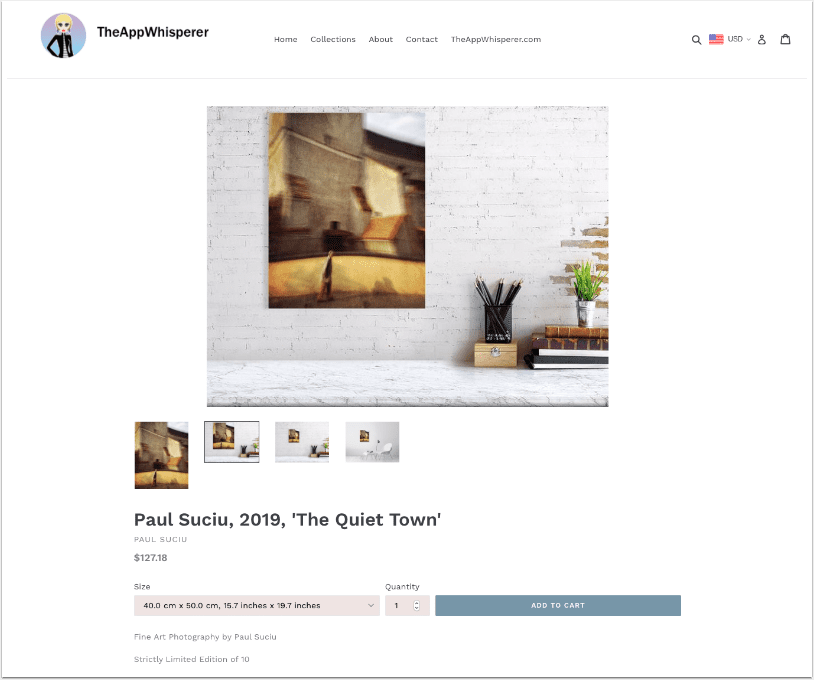 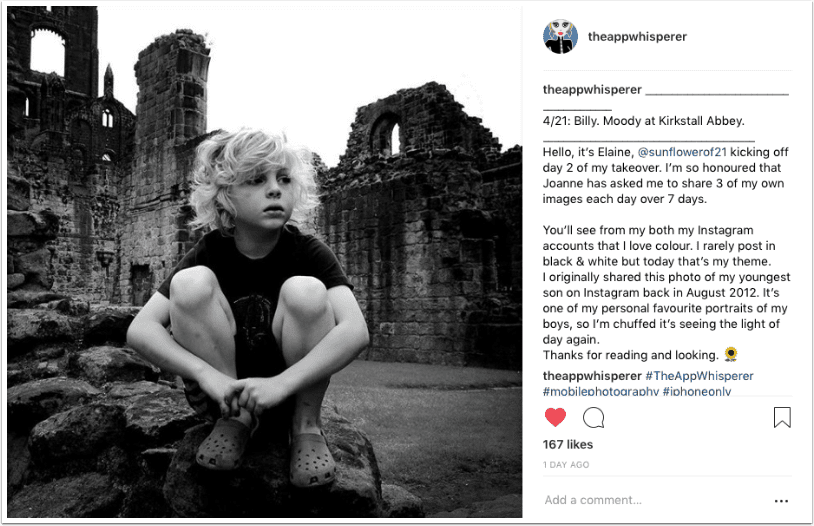 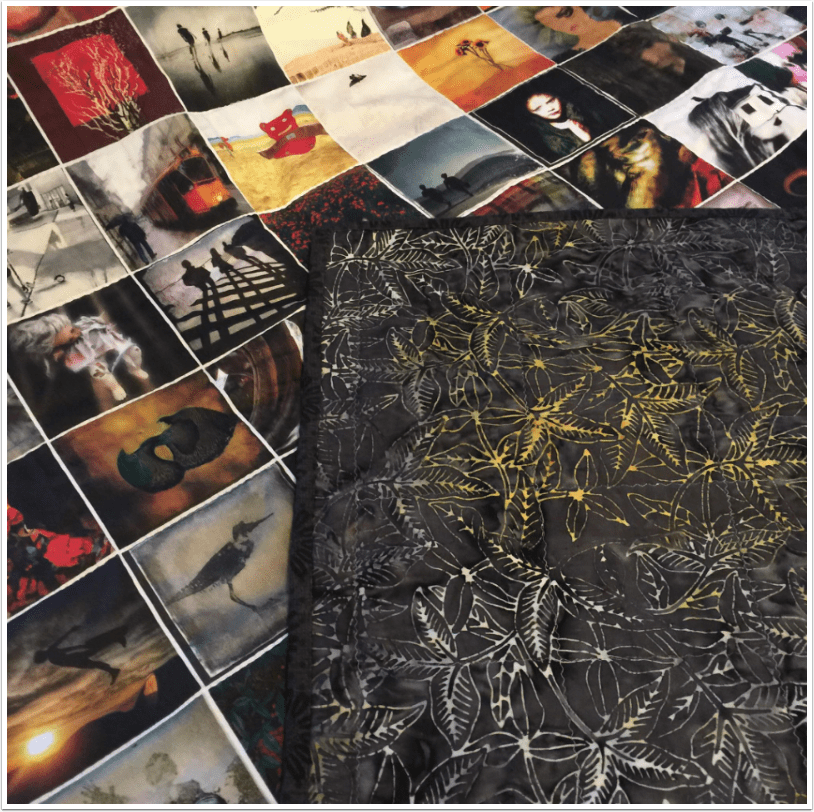 New Projects – Our New Form of Artistic Installation aka ‘The Quilt’ Is Ready!