Flurry have completed another great analysis, this time regarding the battle between the Apple App Store and the Android Market. We all know that the app software phenomen is growing at an incredible rate and Flurry have gone so far as to illustrate this, take a look at the charts below… 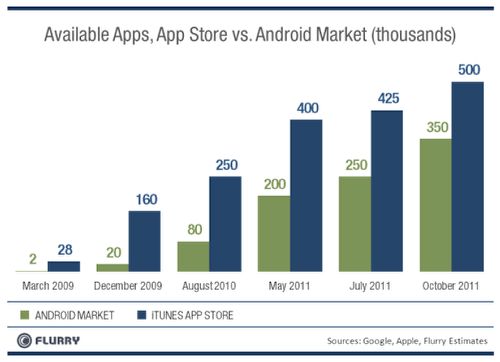 This chart is comprised of publicly available data.  Where data wasn’t available for the same month in both markets, Flurry estimated the number of available apps based on interpolation (e.g., approximating a point between two existing data points), or by looking at the growth rate leading up to a specific month.  The number of apps is growing significantly in both markets.  And while the App Store has attracted more apps to date, the Android Market is closing the gap.  Now, let’s turn our attention to total app downloads. 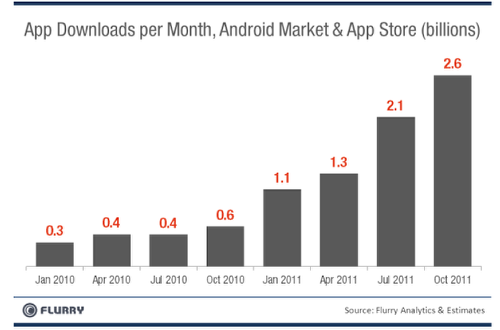 The chart above sums Android Market and App Store downloads per month.  Starting on the left, with January 2010, Flurry show downloads per month every three months, until October 2011.  In October 2011, Flurry estimate over 2.6 billion apps were downloaded.  The number of apps now downloaded is four times greater than this time last year, in October 2010.  With the holiday season under two months away, the 3 billion-mark download per month mark surely will be shattered this December.  Month-over-month, app downloads have been growing at an astounding rate 11.4%.  With app downloads growing swiftly, even faster than the number of apps being made available, let’s now look at app retention. 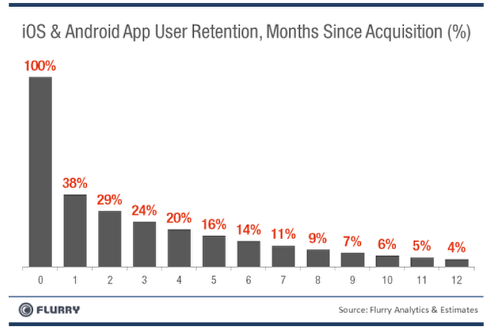 This chart shows the percent of consumers that continue using an app, since their first use, over 12 months.  At the far left, marked as month “0,” 100% of a consumer cohort begins using an app.  After three months, 24% of them continue using.  After 6 months, this percent shrinks to 14%, and, by 12 months, only 4% are left.   For this analysis, Flurry compiled data from 25 apps downloaded a cumulative 550 million times.

"With app downloads increasing month-over-month and app usage not only climbing, but also surpassing web usage, we know that consumers are both discovering and using apps more than ever. And while the industry often talks about discovery as a problem, we think the real problem is traffic acquisition. To understand this, we turn to the web.

Online, website marketers don’t stop marketing after they get a consumer to visit the site only for the first time.  They can get in front of the consumer in various ways again, and spur a return visit by having the consumer click on a link.  Typically, online, a visit starts from an organic search result, but search doesn’t exist for apps the same way, and consumers seem to browse more, especially given touch interfaces.  The closest thing to search in the app world is a consumer browsing the top ranking lists, which represents “popularity” in a similar way to top ranking organic search results.  However, in the app world, top rank lists are more like “paid search” since heavy advertising is what typically launches an app to rank high, at least for a while.

Further, always trying to rank high, as a tactic, is not only untargeted and expensive, but also suffers from diminishing returns.   First, the bar required to make the top 25 keeps rising, as the installed base of consumers grows and more apps compete for a fixed number of top spots.  Regarding diminishing returns, an app can only appeal to first-time-users each time it ranks.  It’s a pure first-time acquisition tool.  App users don’t re-launch apps when seeing them in the top rankings.  They need to go to their app icon and launch from there.  So as an app’s installed based grows over months, even years, the relative number of incremental users that can be added from ranking in the charts continues becomes relatively smaller.  In other words, over time, an app is better off targeting its much larger installed base of users to increase usage.  This is the equivalent of traffic acquisition.

The key challenge is that developers lack the tools to bring traffic back to their app, post-download.  And, therefore, the industry has a traffic acquisition problem, not a discovery problem.  Only when compelling ways of connecting with existing app users are established, that allow the easy re-launch of an app, can app makers address retention through marketing, and fully control their own traffic acquisition".