Benamon does it again, with another fantastic sixth article for his Column PictureBook. In PictureBook Benamon concentrates on the the story behind the image. As Benamon himself describes it: ‘As Photographic artists we do not just capture stories but create them, the journey behind and the image we present. PictureBook draws on Images selected from my own story series but will also look at the work of the other story tellers within the community’.

Don’t miss this incredibly creative article from Benamon, another great piece. Over to you Benamon…. (foreword by Joanne Carter).

“Before her glass eyes the toys moved around, but she did not see them.

Like flickering images from a projector, strange memories played before her inner vision and overwhelmed her. Once she had tried fight it, but she was too new, herself to small and the Now too fleeting. Against the wave of days she was seduced and lost. Paper in the rain.

The other toys had watched in strange fascination when Syster had delivered the brain from its jar and laid it into Minerva. Her china head opened in fearful compliance of Loki’s curiosity.

Fasination turned away as they watched her sink into herself, small sounds and twitches, muttered words from forgotten conversations gave way to silence and the image of lifelessness.

The toys drifted away to other games and newer fascinations and Loki sought out other games. 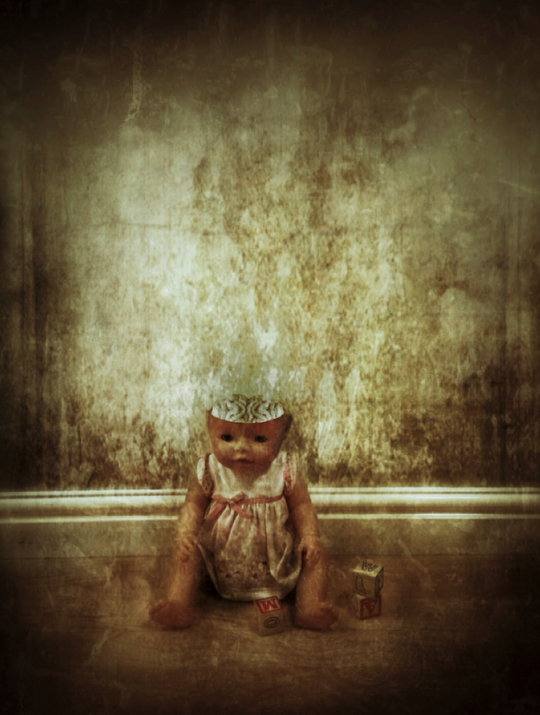 © Benamon Tame – ‘The Burden Of Self’

Minerva is another casualty of the Toy Room, her story touches on the fragility of personality and how much of who we are is based on what we have experienced. Minerva is paralysed by the weight of memory from the brain Loki has given her. The flood of past events replayed and all the emotion attached to them, reducing her place to that of a mere observer, barely herself only in that herself is the point of observation. Her own sense of self is too new, no memory of experience to support it and compete. She is also caught by the richness and otherness of it, mesmerised and addicted to exploring another, giving her something the Toy Room could never give her. 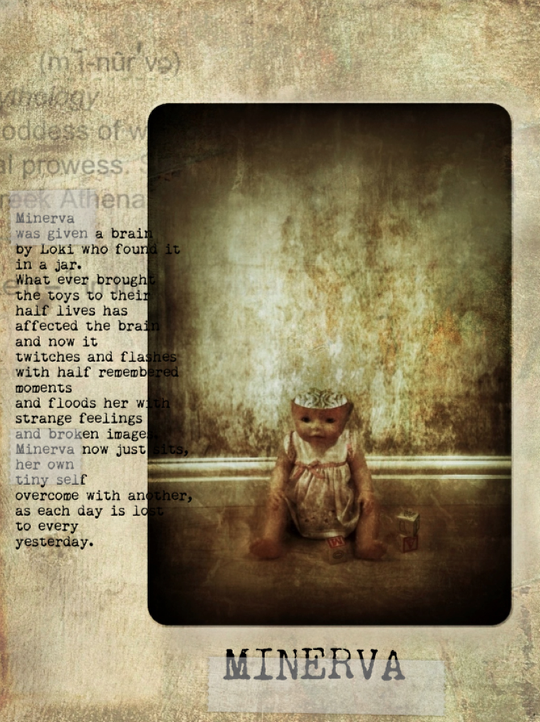 © Benamon Tame – ‘The Burden Of Self. Typewriter remix’

Minerva took her name from the Roman Goddess of wisdom.

When looking at the remixes for Minerva I wanted to try and visualise the thoughts in her head and the butterflies beating against a window came to mind. Wings flickering like jumbled memories against the front of her consciousness . I also imagined Minerva caught up in a memory, watching the flight of butterfly, consumed by exploring all the detail of it and everything around, sounds and textures, the feel of everything and the myriad of emotions and strands to other memories. The butterflies are presented in mix, not quite as real as Minerva beneath them and tinted almost like a film negative. 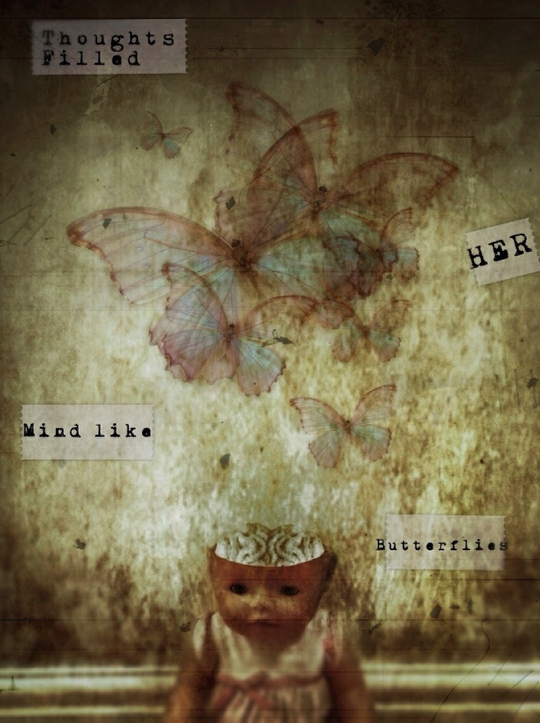 The butterfly wing remix drew this quite boldy while the Butterfly thoughts remix took the main elements and combined them to create a visual shorthand for her mind and body”. 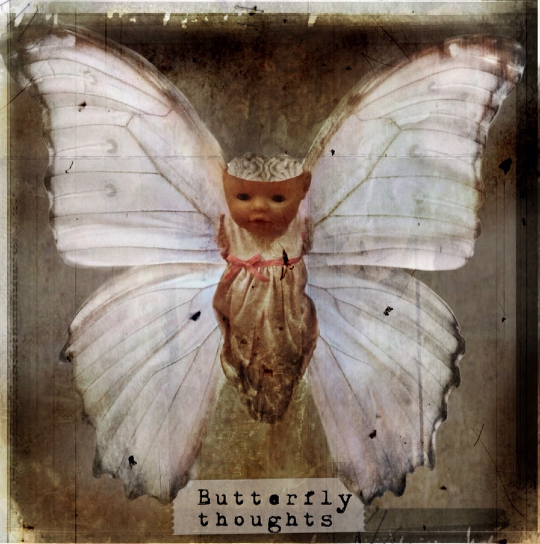 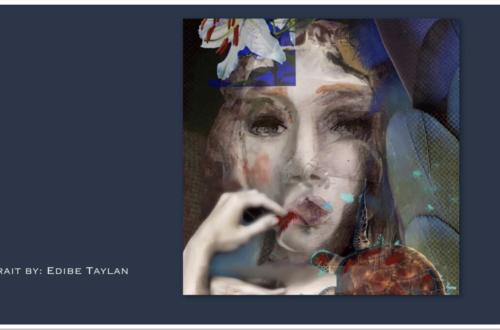 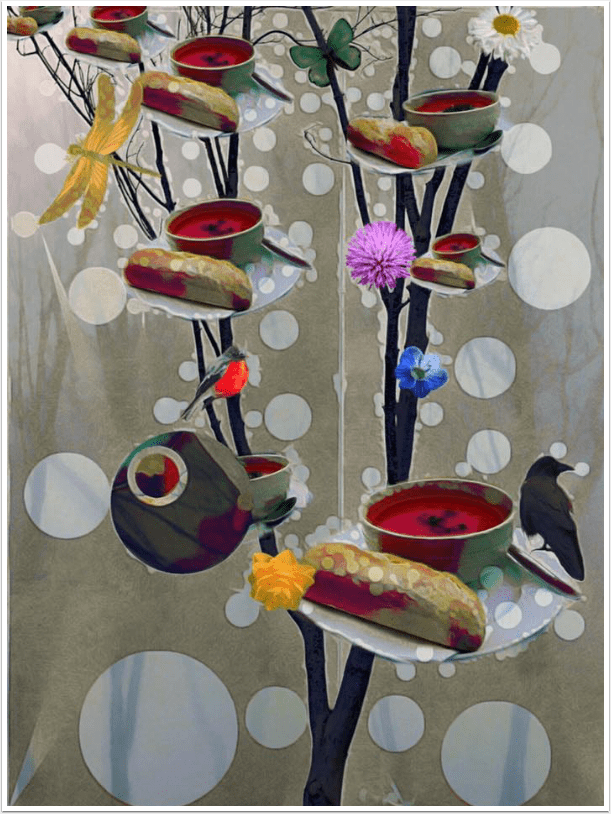 Artistic Anarchy – Mobile Collusions is Back! 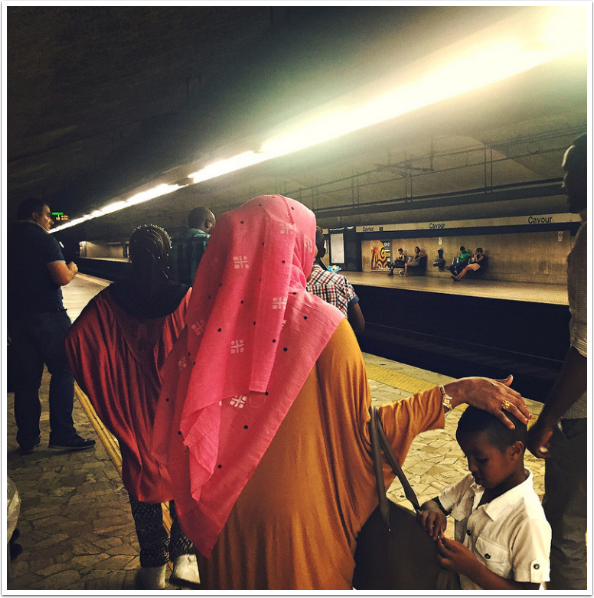