While the iPhone, with the iOS behind and all those nice photo and art apps available, is a wonderful mixture to do art and art related stuff right in your hands it is not so perfect to help you edit imagery which is “shaky”.

Yes, there are software driven stabilizers available for several apps, but it still could happen that a picture you want to have “sharp” is slightly blurred due to unexpected camera movement because it’s windy for example.

Let’s discover three different methods, or better plugins, you can use to save your images. Yes, you will need Photoshop for that, but there is no written rule that you don’t do that. The iPhone and the apps came to our creative life to show us that there are no “real” borders for artistic photography, so let’s think open minded and not within borders.

First of all we will talk about what’s not possible with those plugins. You can’t recover images which have really strong motion blur because the objects itself has been moving too fast for the shutter speed, or you moved the camera within a wide range to achieve a dynamic effect. But it will work with images that have a small amount of blurred edges due to the movement of your hands while taking the photograph.

Let’s take a closer look to our image and the plugins. All application don’t simply try to raise the micro contrast in the picture to give you the “feeling” that is sharper now, they all use (different) kinds of so called “blind deconvolution”, a method to mathematically recalculate the pixel position where they should be. If you are really interested in you may read a more in depth description here:

Before I will explain the single apps you always should keep in mind that one plugin can’t solve any problems you may run into. So with our example here, one worked better then the other ones … but this may change with another subjects you have to deal with.

We could fill a lot of pages with all the sub-settings these plugins offer, but we don’t want to do that. What you will find is a short overview with enough information to check.Topaz and Piccure also are offering demo versions, so you can test those plugins. And yes, they work with Photoshop CS. 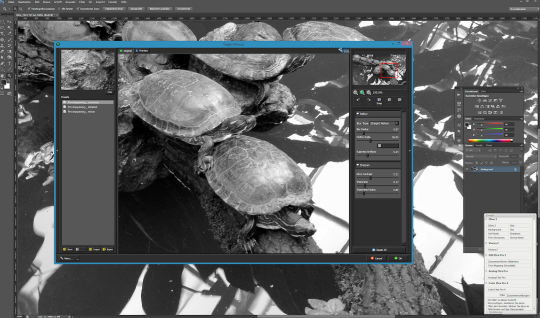 The well know plugin factory TOPAZ labs released a bunch of well usable plugins over the past years, from artistic plugins to plugins that help you to de-noise JPGs. The plugin we want to take a look at is called InFocus. More than the other applications it can be used to “unblur” images not only remove unwanted shakes. It offers several different base settings, but always starts with the Deblur type “Generic”, which leads to acceptable results in most cases.

If you can’t get what you want, you still have “Out-of-Focus”, “Straight Motion” and “Unknown/Estimate”. Unknown/Estimate should be your choice if you are not happy with the base generic settings, because it tries to recalculate the movement the camera has made. In all slots you will have the chance to set the blur radius, which determines the amount of blur found in the image. Other “sub-sliders” help you to fine tune the image. Available for Windows and Mac. 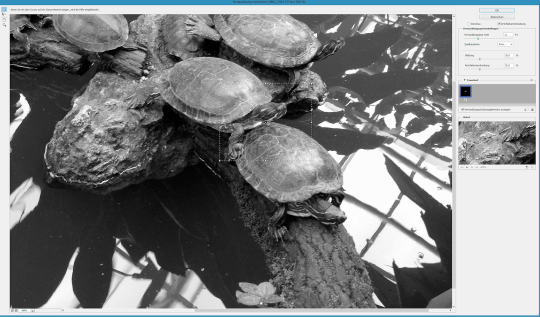 Yes, you will only find that kind of plugin in the cloud version of Photoshop, there is no plugin for the “old” CS versions available. This plugin is specialized to remove unwanted shaking in your pictures.

When opened it automatically calculates a pattern which shows the amount of blur/movement in your picture. You can always reposition or scale this square rectangle and you can mix different calculations. Like Infocus it offers you some settings to minimize over-sharpened results. If you want more freedom to get the right movement out of your image you can use a tool where you draw the angle of motion into your picture. 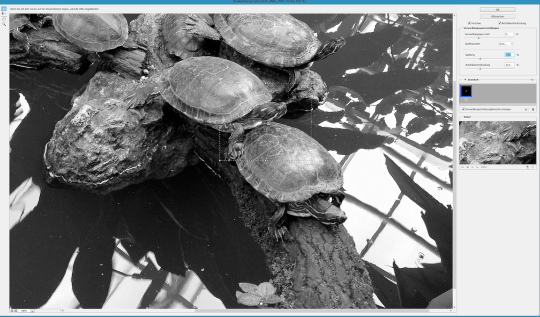 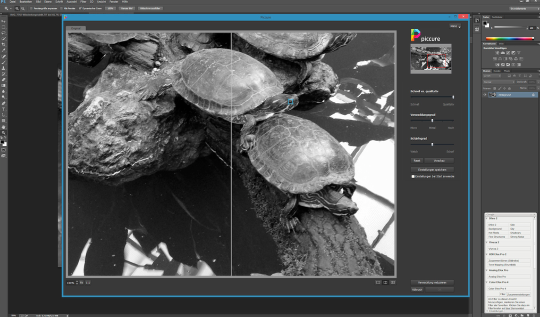 A German based development team launched Piccure for Photoshop, Lightroom and Photoshop Elements in 2013. Available for Windows and Mac. It looks very similar to Photoshops own Camera Shake Reduction module, but I’m sure they use a different algorithm.

Like Photoshop and InFocus it offers you sliders to fine tune the results you will get when using the default settings. If you want to be more efficient you can used so called “smart spots”. You can interactively establish those smart spots (only one at a time) in an area where you get the best information about the movement. The manual will give you an excellent overview about that. Martin was born in 1959 in Germany and studied Graphic Design at the University of Applied Science in Munich. His father led the camera development team at AGFA in Munich. Martin’s father was also a gifted painter, illustrator and photographer, enabling Martin to be exposed to this medium at an early age. Martin’s images today are either photographs or illustrations and have a graphical shade, like old etchings. He concentrates on shapes and textures rather than a full spectrum of colours. Martin’s images mostly show technical or mechanical equipment, landscapes, architectural objects, plants and some animals – his illustrations are more a mix of fantasy themes, sci-fi as well as surreal and the erotica. For the past 25 years Martin has been working for companies including Ferrero, Honda, Mercedes, BMW, Jaguar, Siemens photographing, compositing, 3D modeling, vfx and illustration. From 2008 Martin has run a company – Models from Mars LLC which specialises in visualisation, cgi and photography with Clint Clemens (Canon Explorers of Light) in Newport, Rhodes Island.