We all know that the iPhone has become a real filmmaking tool and it is so good that this knowledge is filtering out into the professional film world. Koji Go is a simple iOS app that lets you apply Koji film emulation to your iPhone photos and videos. Koji Go comes with 3 versatile motion picture film stocks, and you can explore 16 more looks in the Koji Go store.

The looks in Koji Go were developed by Dale Grahn, a longtime partner in developing Koji and the color timer for Steven Spielberg and Francis Ford Coppola (among many others). Dale developed these looks specifically to work with iPhone images. The looks are based on his work on various films, including Minority Report, Gladiator, Amistad, and others.

To create the film stocks in Koji Go, the developers worked with film labs (both photochemical and digital) to make thousands of careful measurements of real physical 35mm motion picture film stock. They then adapted this, with Dale’s help, to work with the iPhone camera. The result is a film lab that you can hold in your hand and we like it! If you want to make further color tweaks to your video, you’ll be able to transfer it from the app to Koji Advance for Final Cut X. 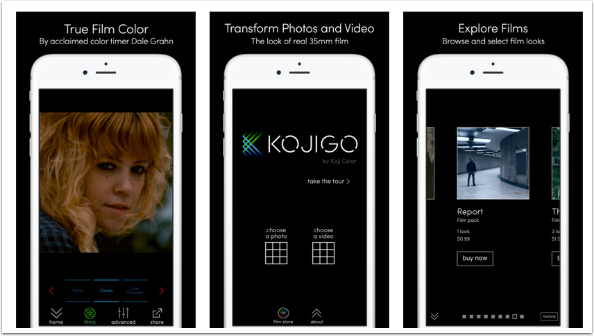