We have interview and reviewed some apps by Michael Ditter previously, most recently FoodGuide for iPhone, which has been a great success. Michael decided to continue with the food genre and has created a fabulous iPad app that is also proving to be very popular – The Photo Cookbook – read this exclusive interview to find out how Michael manages to be so successful. 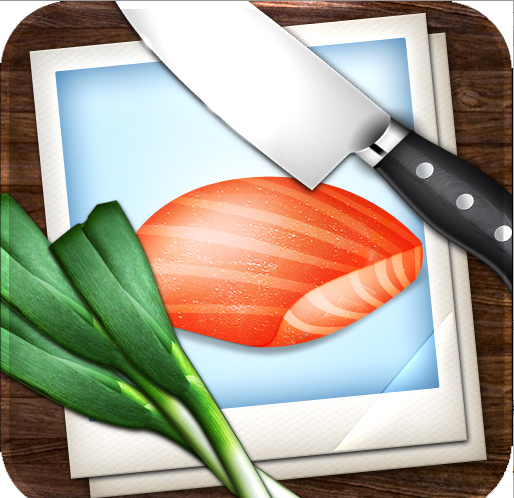 Hi again Michael, can you tell our readers how your iPad app was originally thought of, what were your thoughts behind the marketplace, specifically?

We have had a good relationship with the English book publisher, Parragon Books Ltd, for years and were engaged in discussions about adapting book contents for iPhone Apps since early 2010. We had a stack of books from the publisher in order to examine which topics might be worth considering. One of these books was Frame by Frame Quick & Easy (Parragon Books Ltd, 2010). The concept of this book is to present easily comprehensive pictures for all work steps in each recipe. At the same time, Steve Jobs introduced the iPad and my programmer, Alexander Blach, said “The Frame by Frame topic is made for the iPad!” We licensed the content with Parragon in order to develop an iPad cooking App. After a few weeks of intensive work, The Photo Cookbook Quick & Easy App is available – shortly after the release of the iPad. 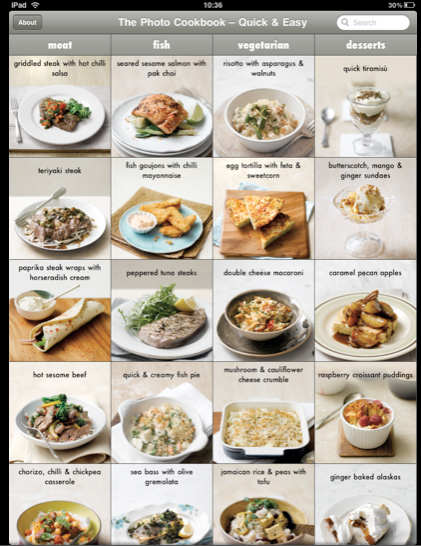 The chapter content is vertically divided into the four chapters; you can scroll the recipes within these columns – a development of our programmer. The icon was developed for us by the internationally renowned Danish designer Michael Flarup. All other parts of the App – pictures, typography, and startup screen – are based on the design of the printed edition. 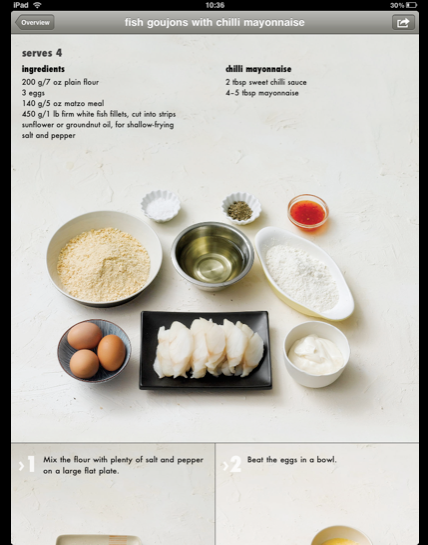 Who do you see as the main target market for this iPad App, in terms of genre, age?

The App addresses all those who like to cook and create sophisticated dishes without spending hours in the kitchen studying complicated recipes. Buyers probably come from all age groups. 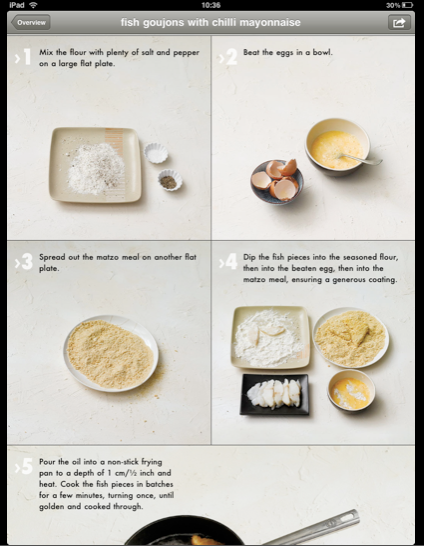 How long did it take from the original planning to the production process of your iPad app?

Since we could resort to existing content of the printed edition, practical implementation did not take too long, maybe six weeks altogether. 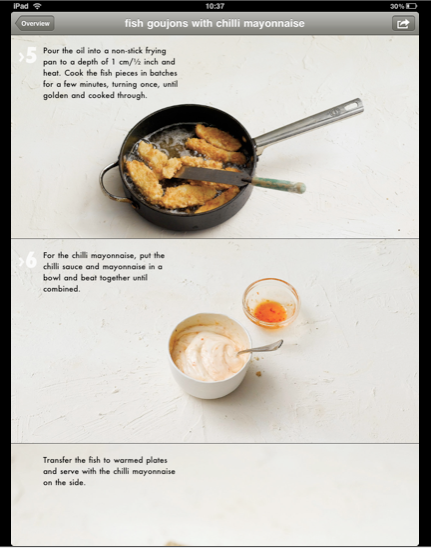 Based on our judgment, there are potentially many buyers. The App is internationally well received and gets good reviews. Apparently, the buyers appreciate the mix of clarity, the simple concept, easily replicated recipes, appealing design and the professional high resolution pictures which are marvelously impressive on the iPad. 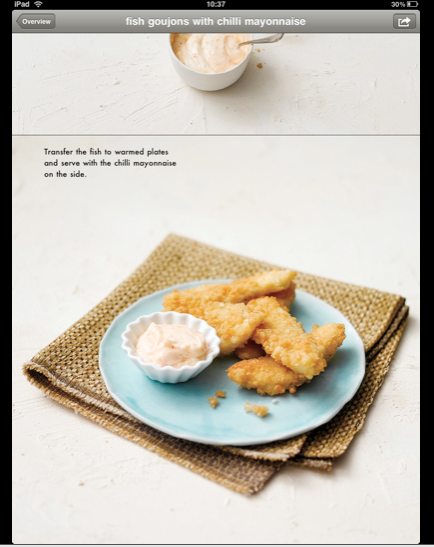 What has been the hardest obstacle you have had to overcome regarding this iPad app development?

After the App was published, it quickly became clear to us that we would have to include more recipes in future updates and we wondered where to get them. Luckily, Parragon had more titles following the same concept in the pipeline of which we can use enough recipe material for updates. So that is straightened out. 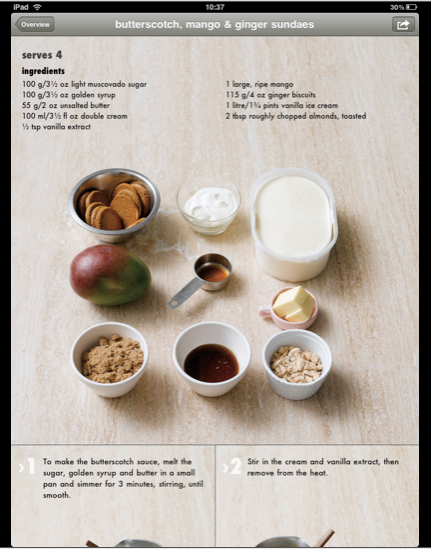 Would you consider developing iPad apps for third parties?

No, we have enough ideas to implement our own Apps. 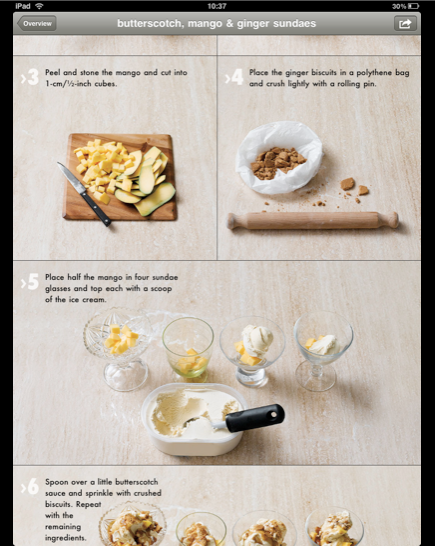 That after developing an App you need to have enough energy left to do some marketing for it. 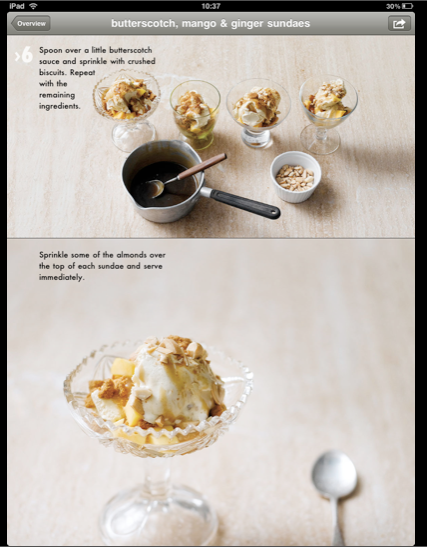 Have Apple supported you well with your iPad app development?

Definitely! After the App rose in ranking in many countries just a few days after publication, it was featured in the category New and Noteworthy in ten countries, the USA, Canada and Germany among others. The sales figures multiplied thereupon. In the US, we rose to number 25 top overall, in Canada 28, in Germany 7. We were in the top 100 ranking in almost 60 countries and number 1 in Lifestyle in 12 countries. Currently, we are advertised in the category New and Noteworthy by Apple in the iPad App Store in 72 countries. In all probability, there will be more to say about this, but at this time, I cannot talk about it yet. We will keep you posted. 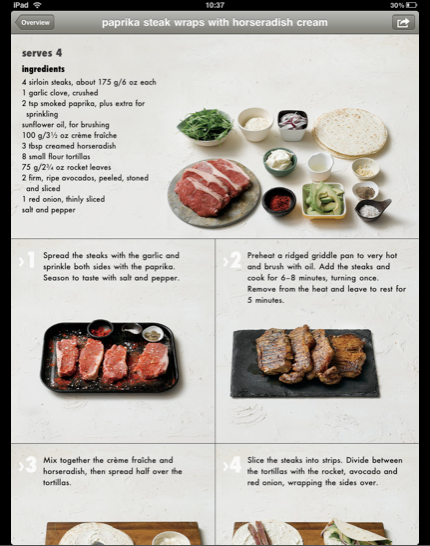 What next, are you developing another iPad app? Would you go for the same genre again, if not which?

Now that The Photo Cookbook is such a great success, we will concentrate on this App, expand it and add additional functions. We are planning to transfer the concept to other topics.

This app retails for $4.99 and is available for download here 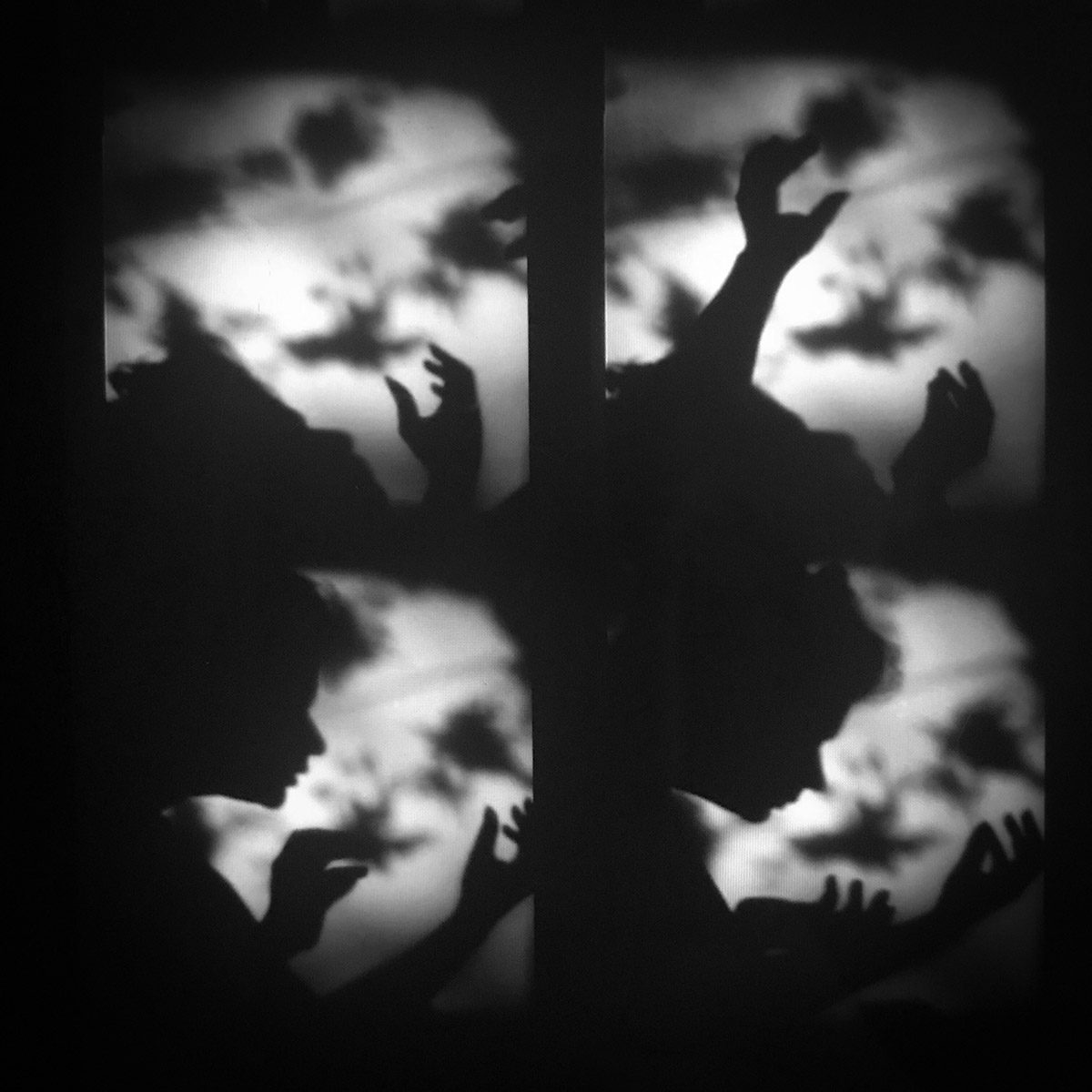 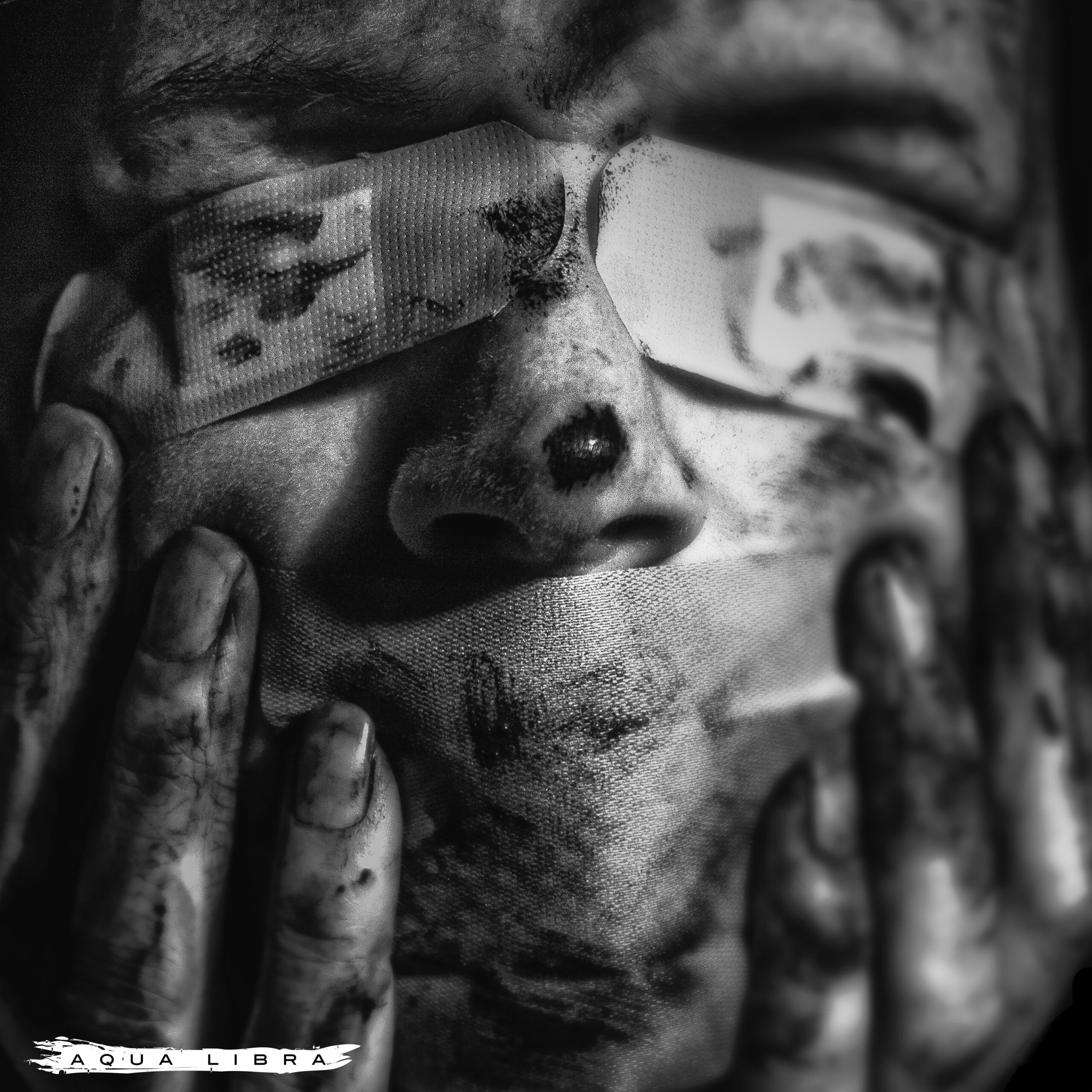 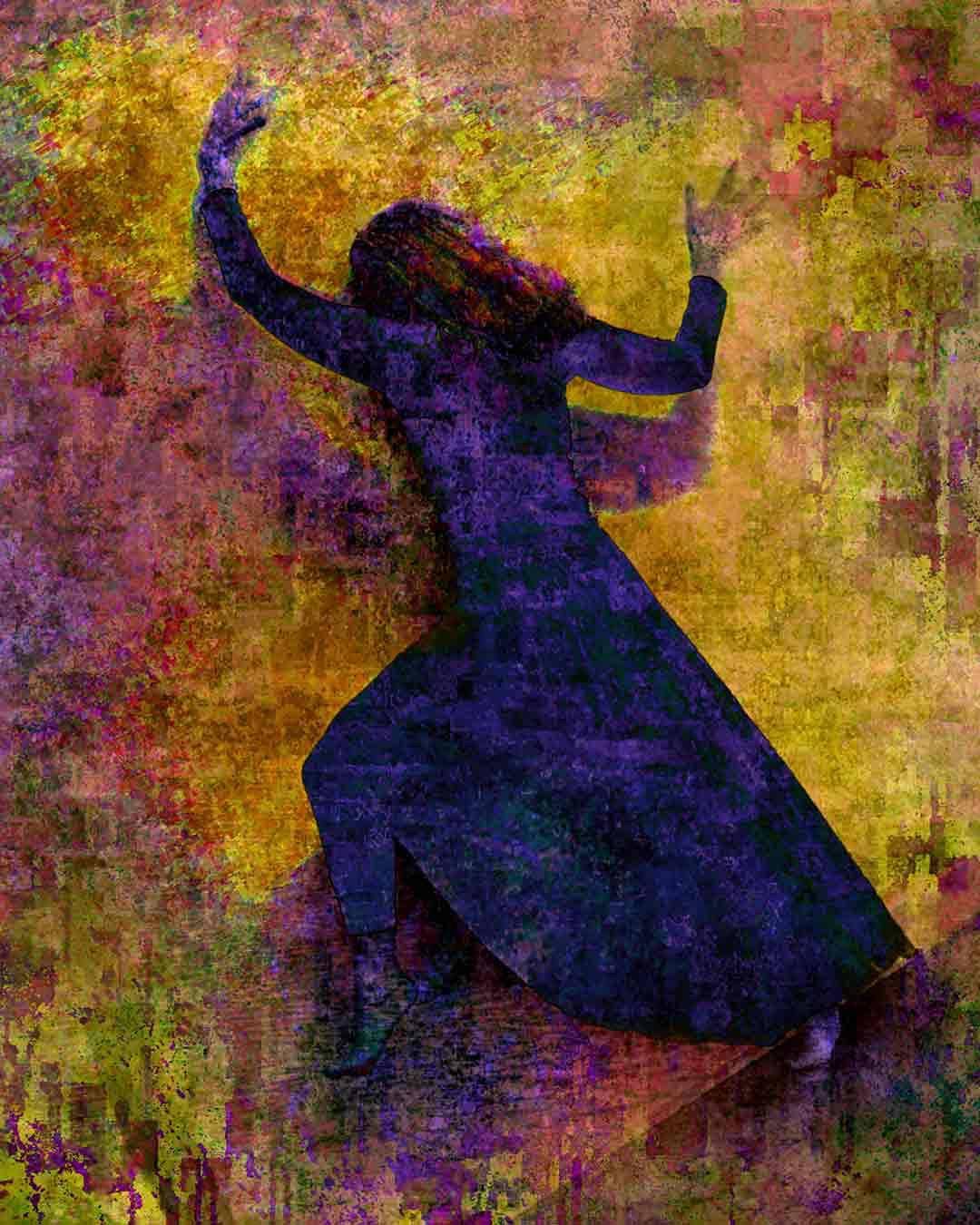