With the massive launch of Call of Duty: Black Ops yesterday on November 9, 2010 also comes the arrival of some really cool iPhone and iPad apps that will help you get the most out of the game, when you’re not playing it, that is. Take a look at these… 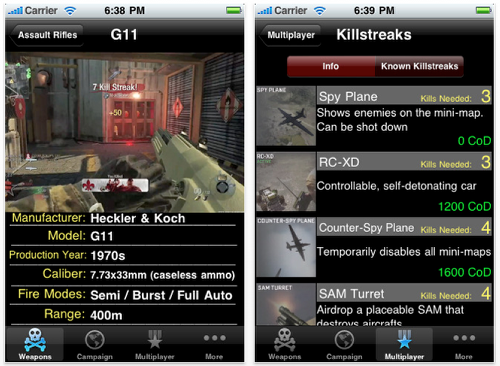 This guide will keep you up to date with everything you need to know about Call Of Duty: Black Ops. We have tons of updates planned for this app. We will be your number 1 source for all the latest Black Ops information.

This guide includes:
– Full high quality Black Ops videos right in the app. No internet required.
– We dig into each trailer and show you what hidden gems are inside that leave clues to what weapons and features will be in the final game.
– Confirmed and speculated weapons that will be in Black Ops
– Wallpapers for your iPhone or iPod Touch, download them right from this app.
– Campaign plot and mission info
– Multiplayer info including new multiplayer features
– Stay up to day with Black Ops’ development milestones. 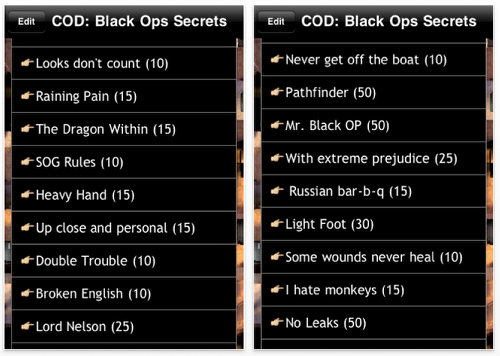 Call Of Duty: Black Ops has released secrets and guide for this top game to be released.

Now you have the edge that will get you ahead of the game. Play the game in a whole new light.

Keep up with the latest as it comes out. 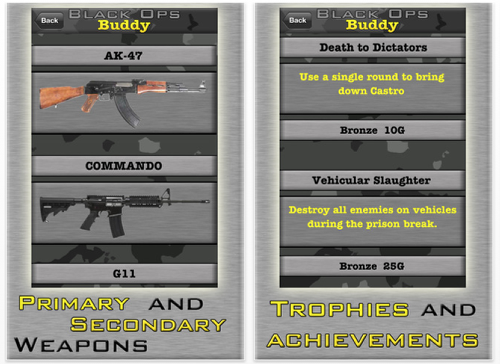 Black Ops Buddy is the perfect solution if your a gamer and you love Call of Duty. It is the only app you will ever need to download for any information about Black Ops you could ever need.
With Black Ops buddy you can see EVERY perk from all categories, view EVERY achievement or trophy and their values, see EVERY weapon from pistols to assault rifles, check out all the kill streaks from three kills to eleven, and even read the latest Black Ops news. This is the perfect solution for every gamer, and best of all its completely free! 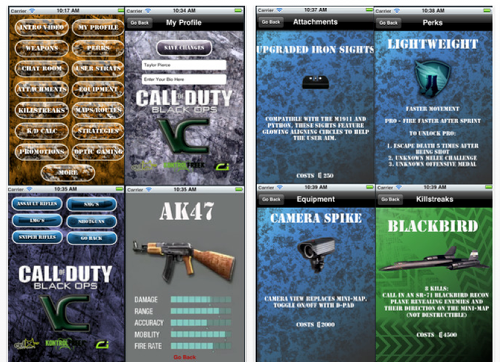 The new update is on its way. It will include: Maps with zoom scroll and the ability to draw rush routes right on the screen with your finger, tons of info on Zombies, more gameplay strategies from the pros at Optic Gaming, advanced info and statistics on each gun, camos, and achievements.

Want to take your Call Of Duty Black Ops game to the next level? Black Ops VC Basic is your tool to dominate opponents. With features designed with competitive and casual players in mind. 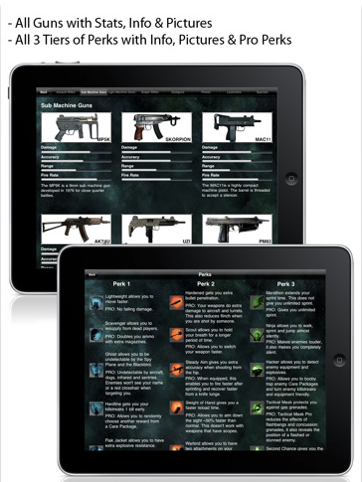 Complete Guide: Black Ops Unlocks is one of the top selling iPhone & iPod Touch Reference Apps! Now, it comes to the iPad! 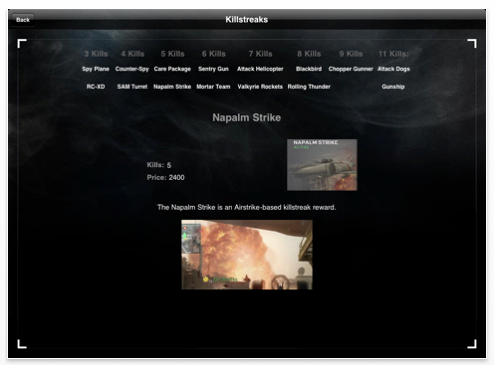 After the official release of the game on 11.09.10, this app will contain complete stats for all weapons, interactive maps, perks, titles, achievements, emblems and challenges. 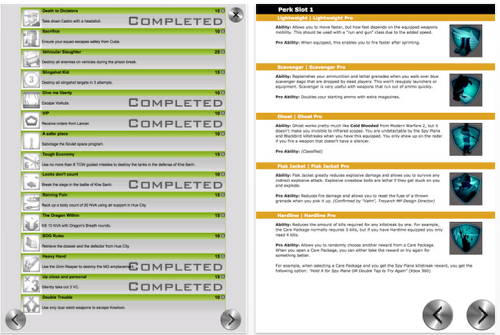 In this guide you will find:

* Full Weapons List with Guns Ability – A list of every weapon in Black Ops with their Damage, Range, Accuracy, Mobility and Fire Rate. See images for example.

* Full Perks list – View and read about every perk in Black Ops, what it does and what effect it will have. See images for example.

* Tactical and Equipment List – See and read about the Frags, Smoke Grenades and all the new hand-held things in Black Ops.

And there is so much more to view!

As the game is only new out the guide will be updated every week with all the latest Black Ops Information.

Enjoy the guide and stay tuned for all the future updates on this guide. 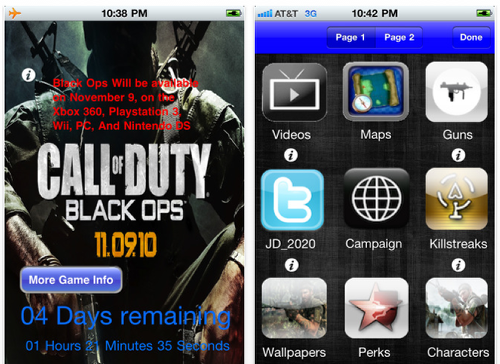 – Guns: Has 12 Different Sub-Sections: Assault Rifles. SMG’s, LMG’s, Sniper Rifles, Shotguns, Pistols, Launchers, Grenades, Miscellaneous/Equipment, Attachments, Camouflages, Sights. In each of these sections you can view all the confirmed guns so far, along with a picture with it.

– Killstreaks: Tells you all of the Killstreaks in Black Ops along with information about it and how much Call of Duty Points (CP) it costs.

– Characters: Shows you all of the Characters known so far in the game along with information about the character and a picture of them. 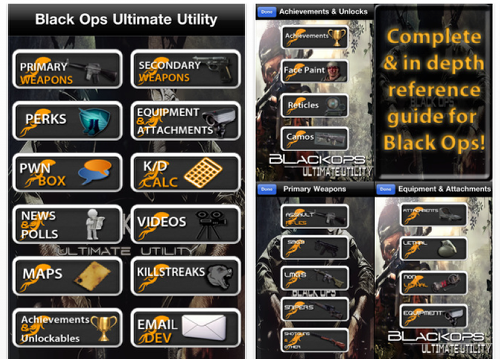 COMPLETE REFERENCE GUIDE:
Get all the information available for the weapons, perks, attachments, killstreaks, and maps of Black Ops.

ADVANCED STATS CALCULATOR:
This ain’t no simple dividing calculator. The advanced stats calc will tell you your K/D and wins ratio, plus how many more kills/wins you need to improve your ratio! You can also know your K/D on the go, because the app stores your last entry!

BRAG TO YOUR FRIENDS:
The app has built in buttons to send e-mails to your friends with your K/D ratio or the number of achievements/trophies that you have unlocked.

PWN BOX:
Chat in real time with other gamers! No need to go through a forum sign up page – just enter a user name and ask your question! There are always people online to talk to!

HD VIDEOS:
There are nearly 100 HD videos already uploaded, with more added each week. You can view all of the official trailers, or top gameplay commentaries from Brass Monkeigh. 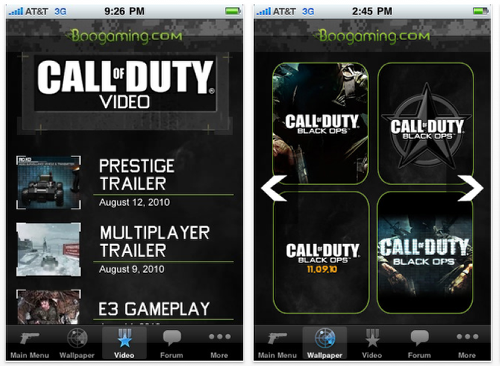 Keeping up with the latest information has never been easier. This app will be constantly updated as information becomes available. Upon game release this app will shift focus and become a title/call sign guide as well as map, strategy, and weapon guide.

– Complete Achievement List (as it becomes available)
– Gameplay Details including:
– game synopsis
– solo mission walkthroughs (with screenshots)
– gameplay features (with screenshots)
– Multiplayer Details
– Weapon Details (all weapon descriptions have multiple screenshots of in-game use).
– Game Images and Screenshots
– Wallpaper Section with custom one of-a-kind walls and more added constantly. Save the images to your phone with ease.
– Video Section with all trailers currently released. More will be added as released.