Welcome to another new series of interviews and insights that we are running on theappwhisperer.com, we are delighted that our A Day In The Life Of Series is so popular and successful and will continue to run that, we love it.

We think you’re going to enjoy this, a lot. Today, we are featuring Donna Donato, we published our A Day In The Life of Interview with Donna yesterday and received huge acclaim, thank you all, if you missed that you can read it here. We were so inspired by Donna’s life story and images that we really wanted to find out more about her photographic background, inspirations and aspirations. Although Donna has lived in a number of places, including Colorado, California, Oklahoma, Washington, DC, Paris, France and New York City, sometimes for long periods, she considers herself a nomad. Recently she and her partner sold everything and in February of 2012 moved to Paris. Donna previously spent one year in Paris, back in the 80′s. She has returned this time to help her partner fulfill her lifelong dream to live in France for at least one year and they look set to achieve that ambition.

Read this exclusive interview with Donna below…

We have included exif data, in as much as the app or apps that were used to create the final image. As some of the images were cross processed we have listed the apps in the sequential order they were used in the editing process, we have also provided links for each app to the iTunes App Store, just incase you’re inspired enough to try them out for yourself as well as accessories used.

(If you would like to be interviewed for our new ‘Extension Of The I’ section, just send an email to Joanne@theappwhisperer.com, and we’ll get it set up.)

So, without further ado, let us begin… 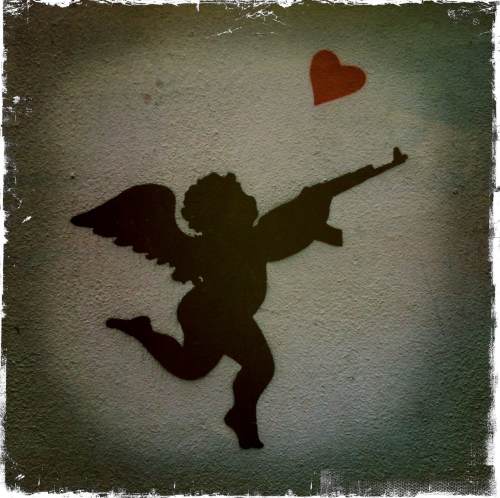 DD – I’ve been dabbling in photography for a long time but in 2000 I discovered and fell in love with the Polaroid Joycam. I began carrying the camera everywhere and taking photographs on a daily basis. After Polaroid’s demise I bought a couple of digital cameras, one even bore the Polaroid name. In 2009 I received a iPhone 3Gs, discovered Hipstamatic and I haven’t looked back. 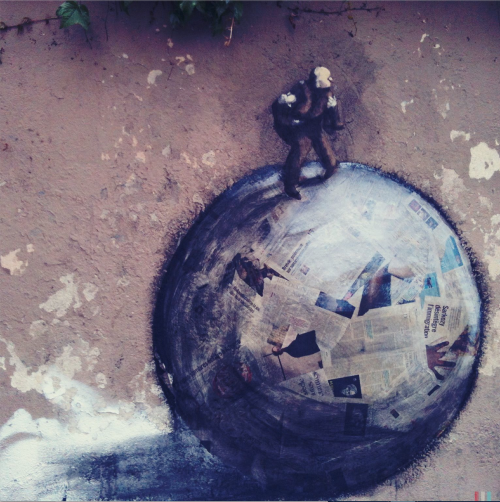 DD – For as long as I can remember I’ve been in love with images, moving and still. Films and paintings play a strong role in my life so I’m apt to ‘see’ light or colors from a favorite painting or painter or the color palette from a film while regarding the world around me. 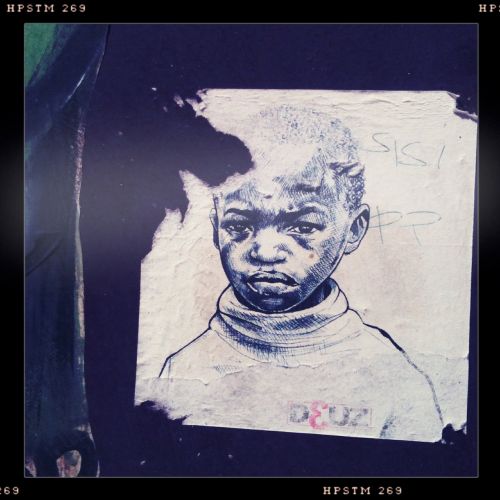 DD – If something catches my eye I’ll usually try to capture it. It seems I am drawn to objects, begin to notice them everywhere. A series comes into being and after a time runs its course. Currently I’m working on four different series: flea market objects, particularly dolls, flowers, clouds and wall art. 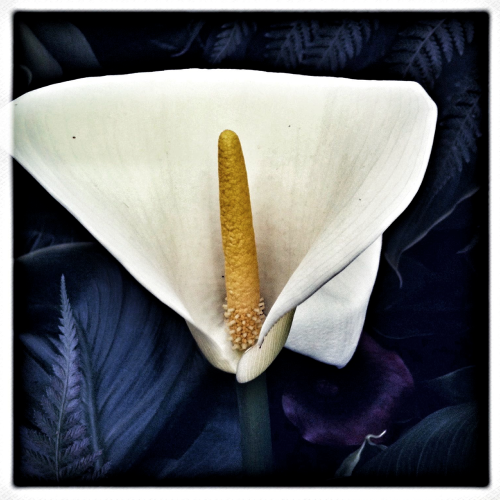 DD – I try to find beauty in all things, obviously flowers and clouds are easy to understand. I’m fascinated by flea market objects and the glimpse into the ‘lives of others’ these objects provide. For me the dolls seem to hold remnants of the love, longing and sometimes pain the former owners lavished or shared with them. I take pictures of wall art because it is ephemera, sometimes beautiful and humorous. 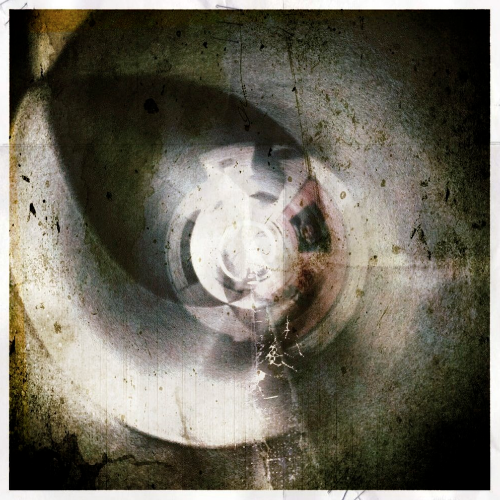 JC – How did you “settle” on this subject?

DD – Didn’t really ‘settle’ on the subjects, just noticed that more often than not, these were the things I was photographing the most. 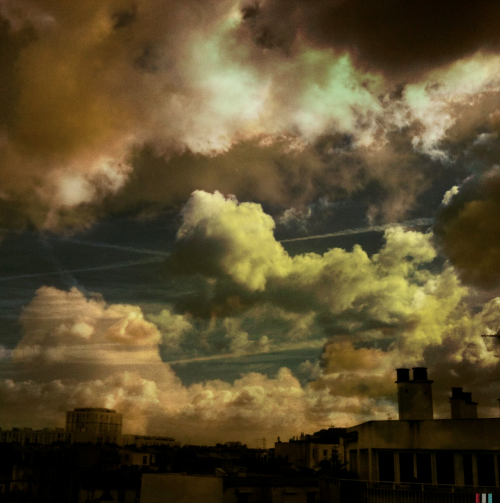 JC – Is there another area/subject that you would like to explore, if so, what and why?

DD – Find I’m not very interested in photographing people or other sentient creatures, so I make an effort to photograph them. 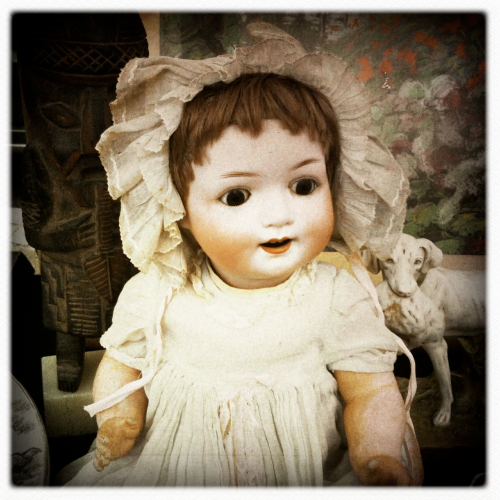 DD – I admire a great many photographers but the first one to come to mind is my partner. I’ve watched her work for a long time and really admire the passion and dedication with which she approaches photography, both her commercial and personal work. 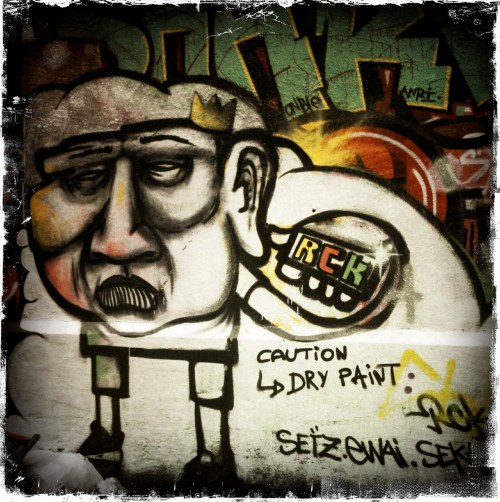 JC – Henri Cartier-Bresson is/was in many ways the Godfather of street photography, even in the 1930s he enjoyed using a small camera for discretion in order to capture people and tell a story-do you feel this way regarding mobile photography?

DD – It seems that smaller cameras work better for street photography because they’re not so intrusive. I think in the mid-90s people went through camera skepticism, annoyance and avoidance. Though many people still seem leery of cameras aimed in their direction, they don’t seem to mind mobile photography, camera phones, quite as much. 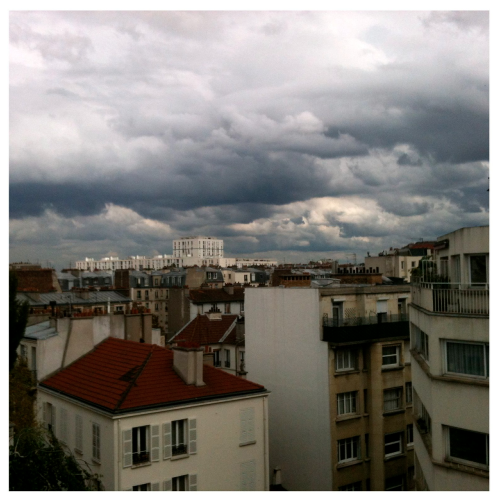 JC – Tell us about your photographic technique do you rely on intuition or do you believe in a more formal/trained approach?

DD – I shoot relying on intuition rather than formal training; mainly because I don’t have formal photography training. 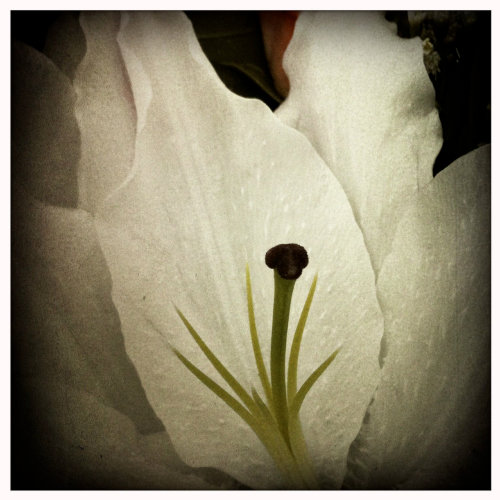 DD – Hard one to try and answer but I hope my work is getting better through constant use of my camera. 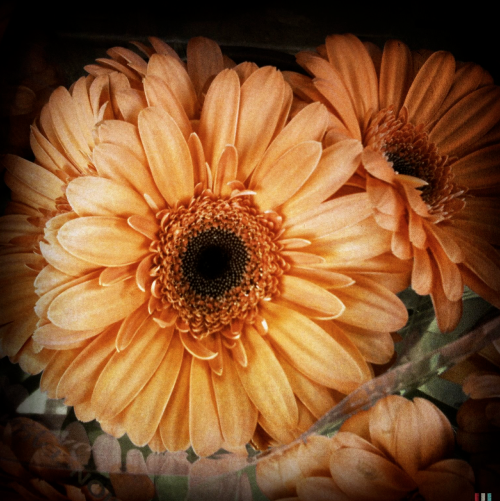 DD – Can only answer for me, but if I see something interesting, try to ‘capture’ what I’ve seen. When I feel myself pandering to other people’s likes or dislikes I try to go back to base, which is myself. 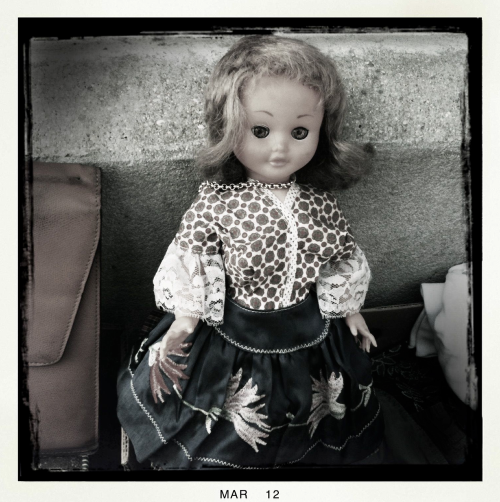 DD – No, I don’t take risks or push boundaries but I certainly applaud the people who do. 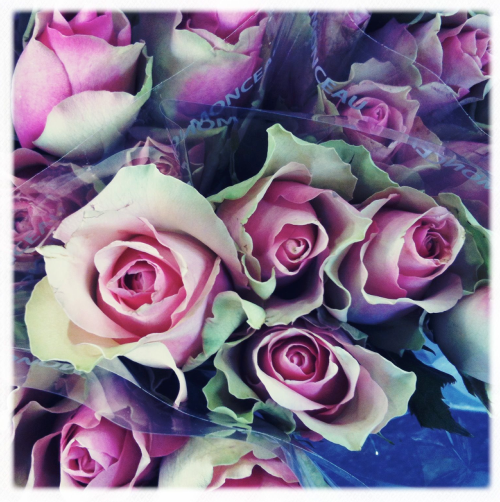 DD – ‘floral detail’ is my current favorite because of the graphic nature of the image. 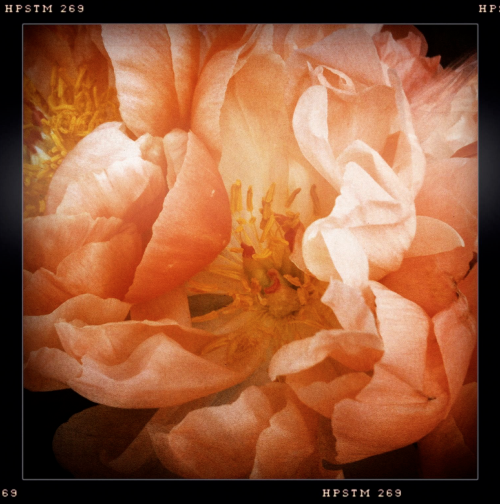 DD – Get emotionally involved… Will say that photography seems to have taken up residence in almost every aspect of my life. Sometimes I notice the light and think about a certain Hipstamatic lens/film combo or want to grab my camera. I remember a recent dream where I saw amazing light and wished I had my iPhone to capture the light so I could app the image later. Woke up laughing because I wanted to app a dream photo. 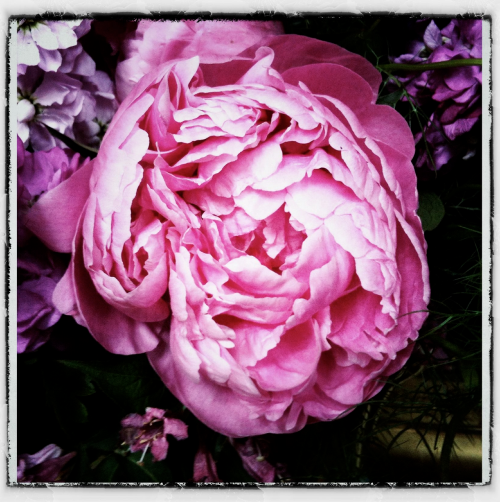 DD- Not exactly sure what you mean about entwined with the subject but am acutely aware of the clouds and skies outside our apartment. Constantly rushing to a window or the terrace to capture the ever changing sky. 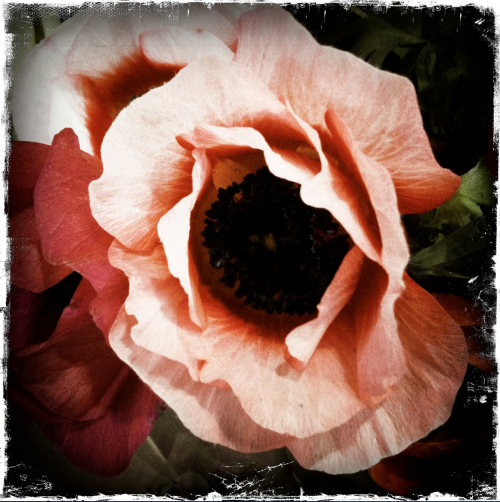 DD – Currently, trying to loosen up in regards to post-processing images because I don’t do it a lot. Want to learn about and use more post apps. Also trying to be more diligent about noting the various steps used to alter a photo. 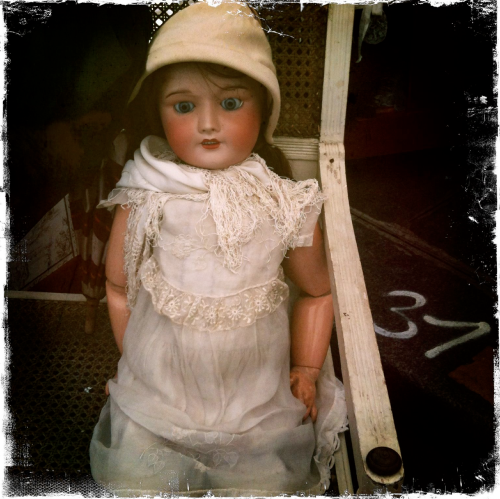 JC – Do you have any tips for post-processing?

DD – Suppose the only tip I can offer is to remain authentic to yourself and do what feels right. Also keep good notes of the processing steps. 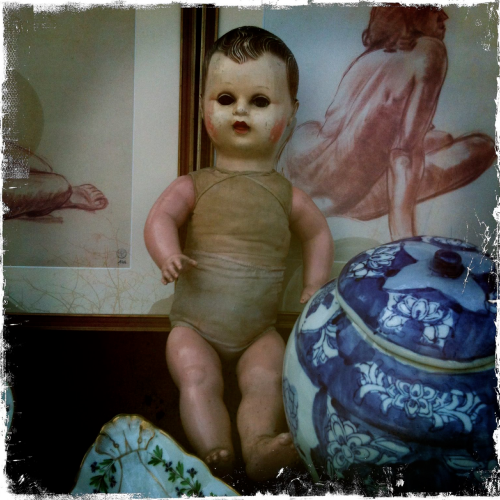 DD – Because of personal predilections, education and career training I could be described as overly cautious. On a daily basis, I download all new images from my iPhone to my laptop. The images are imported weekly into iPhoto where’s there a sort of cataloging system. Plus I maintain an external hard drive back-up of all the original photos. 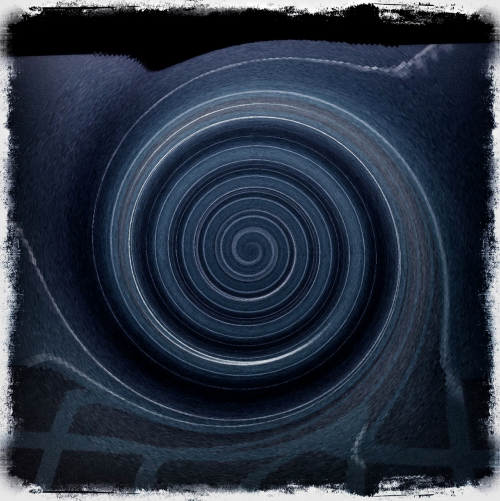 DD – I like the fact that photography has been democratized even more, it’s available to a lot more people. The cost of photography has dropped; no film and processing fees for the vast majority. The downside, many of my photographer friends who depend on their images for a living are lamenting their change in status, they feel undervalued, under-estimated and under-employed. 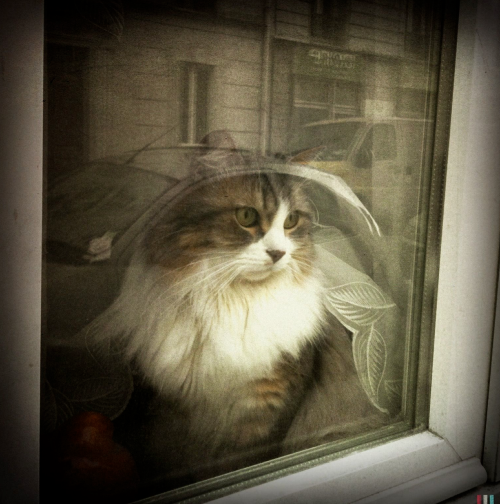 DD – No, I don’t hanker for 35mm film but I have a great appreciation and respect for analogy film. The only 35 mm film I am nostalgic about is used for shooting movies.

Apps With Links Used In This Interview 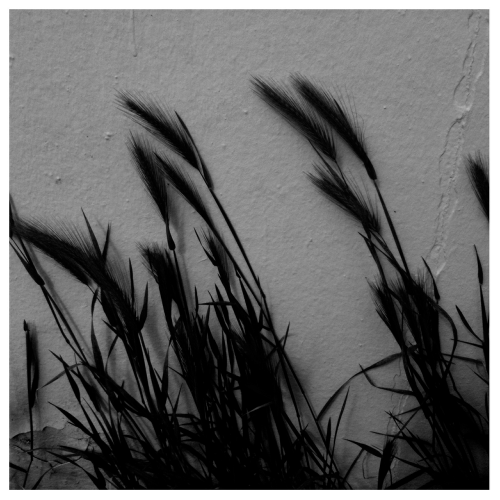 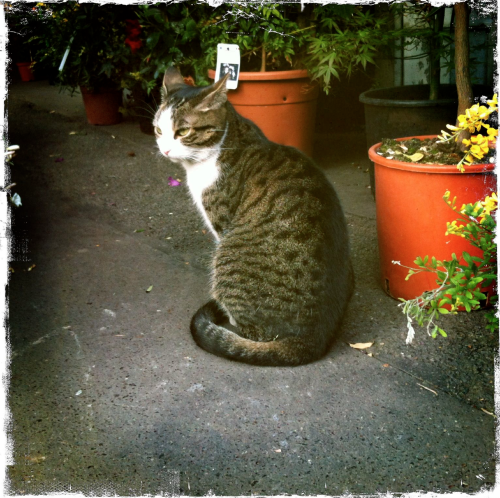