One of the main gripes of Adobe Photoshop Touch was that the resolution was limited to 1600 x1600 but this update now brings it up to 2048 x 2048 – that’s going to please a whole group of people, although it still doesn’t go far enough. The default is still set to 1600 x 1600 annoyingly but it’s simple to change in Preferences. This update also allows for automatic synchronization with Creative Cloud. Adobe have also added the ability to transfer images to desktop via iTunes, added export to PSD and PNG via Camera roll or email and improved roate and flip image workflow.

As well as all that, they’ve also added four new effects, these include Watercolour, Paint, HDR Look, Soft Light and Soft Skin.

This is a brilliant update, it’s free of course, if you have previously purchased this app, if not you can download it here. 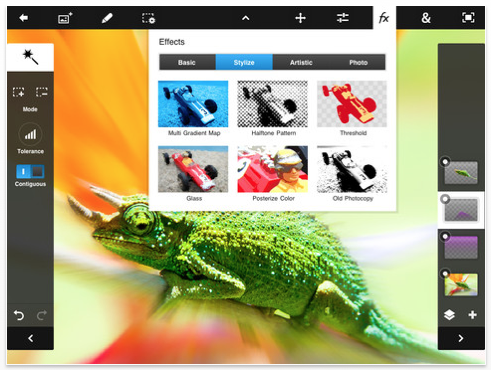