LG Netherlands are determined to push the boundaries of 3D technology and want to demonstrate that movies and games in 3D are cool but your Facebook wall in 3D is cooler. This is an experiment for LG they have created a new studio, known as LG 3D Studios in order to expand the possibilities of bringing 3D technology to a new platform, in this case Facebook. 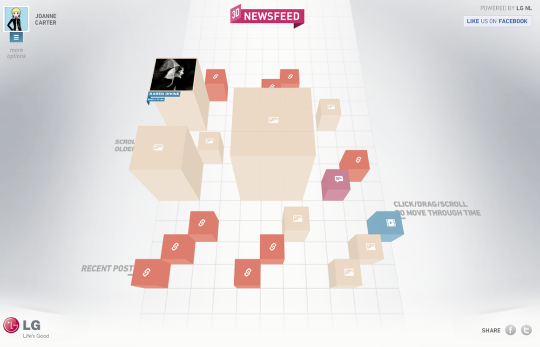 In the video below, you will see an example of a Facebook newsfeed being demonstrated in 3D. We went further and uploaded our Facebook page and it looks really awesome, take a look at the image above. You can see what your page looks like in 3D by going here – http://unr.ly/N7n9JD.

You can also take a look at LG’s YouTube page too, by going here – http://unr.ly/N7n74F

3D technology is actually quite old, in fact the first patent for 3D image-viewing technology was issued in 1838, with Charles Wheatstone inventing the stereoscope to show 3D images. Interestingly, 3D glasses technology was actually first used in a full-length movie in 1922, this was for the film ‘The Power of Love’, unfortunately no known copies surive.

The future is definitely here and it will be very interesting to see where this new experiment by LG leads us next.

This article is sponsored by LG Electronics.