‘Joanne was kind enough to have me join her incredible stable of visual experts and writers to craft articles about those areas of image creation that they are most infatuated with. For me it is Abstract Art created with my iPhone, ergo the title of this column, Appstrax. So without further ado, I am here to shake things up a bit. My intention is to open your eyes to the unequivocal beauty of abstractions and to all those incredible lines of code that can wondrously aid you in creating these marvelous works of art. No, I am not necessarily referencing the “camera replacement apps” or, those “filter flavor of the day apps.” I’m talking about the Decim8s, Tiny Planets, Glazes, iColoramas, iDrostes (consider this a pitch to the developer to get crackin’ and give us back that lovely app for iOS 6) those skewing, disjointing and chaotic little code-critters that bring novelty and head-tilting images to our incredibly reality-driven yet multi-colored world. Liberate those lines, don’t hibernate those hues!

For those of you who may be naysayers or even casual dabblers in this vibrant segment of art, my mission is to try to convince you to take the plunge, try these apps and leave your mark. Don’t be frightened! You can stuff your realist side into the drawer for once, at least for a little while! 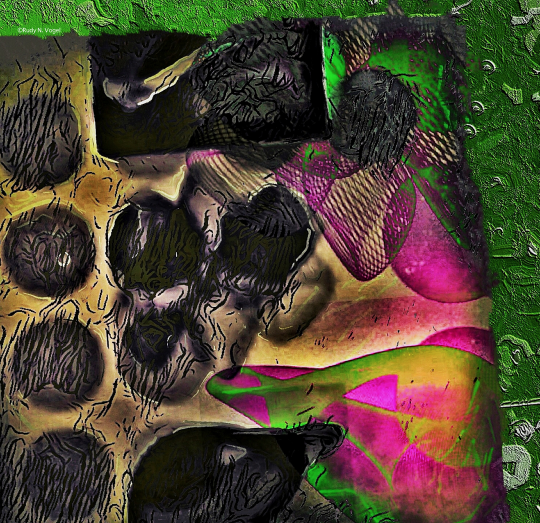 © Rudy Vogel – ‘A Pander By Goose And Gander’

Over the years I have fielded emails from followers and fans, critics and opponents alike who have asked me about my art and they usually zero in the on the same theme and that is “what does that piece signify?” (Note: what they really are saying is “what the hell did you do?”) I will get back to that question and its answer in a moment. But, let it be known, that over the years I have taken thousands of pictures with the tens of thousands of dollars worth of camera kit in my possession (and now occasionally with my iPhone) of landscapes, portraits, still life, reportage, architecture, etcetera, etcetera. And, I always come back to the area I love best abstracts.

So, to open your eyes (yes you, the reader who views an abstract image as the equivalent of a geometric calculus equation), I decided I was going to build off of a recent chat I had with an “Abstractionist-In-The-Making” at a premiere iPhoneography forum called Mobitog. He asked me to critique a piece that he created. Well, I am not a critic nor am I a curator, but I did share some ideas with him that I would like to share with you. I’d like you to begin thinking of an abstract image not as a hodgepodge of colors, lines, doohickeys or the like, but as the result of a philosophy of randomness grounded in a very distinct and robust theory of orderliness. Yes, you will say, that is somewhat of an oxymoron, Rudy. But I posit that this rather orderly world around us was created from shear chaos, a primordial soup of gnashed protons and neutrons that ultimately yielded incredible and ethereal beauty around us. It is this theory of orderly chaos when applied to the production of art that can yield some of the most mystifying, enrapturing and awe-inspiring imagery the world has known. 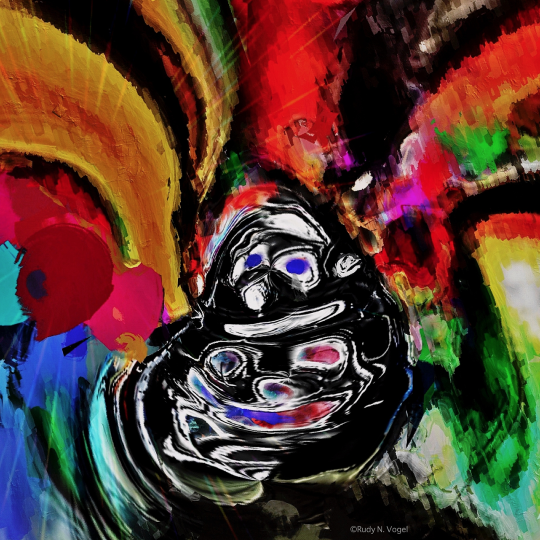 Consider the genius of Rothko, Kandinsky, Pollack, Picasso and Bosch (arguably the first abstractionist of renown) to name a few. They have indelibly left their mark on this world through their very recognizable sometimes a antagonist would argue unrecognizable works, much like an insignia. So, within this chaos, as some onlookers may dub their work, there lies a distinctive genius that was perfected over time. A series of mathematical theories may have been applied to their work whether instinctively or, with forethought. No matter, their works are for the ages. So, when someone asks me “what does that piece signify?” Without a moment of hesitation I ask the inquirer in return “well, what do you think?” A building is a building. An orange is a fruit. And, a sunset is completely a sunset. But, one of my pieces or, better yet Kandinsky’s ‘Black Spot I’ could be any number of things, which allows the onlooker to personalize the image; to incorporate a little scintilla of the artist’s creation into their own being through the processing of that image into a very special and unique “wonderment” that ekes its way into the onlookers consciousness, becoming the viewer’s own thought and impression. That is something special! 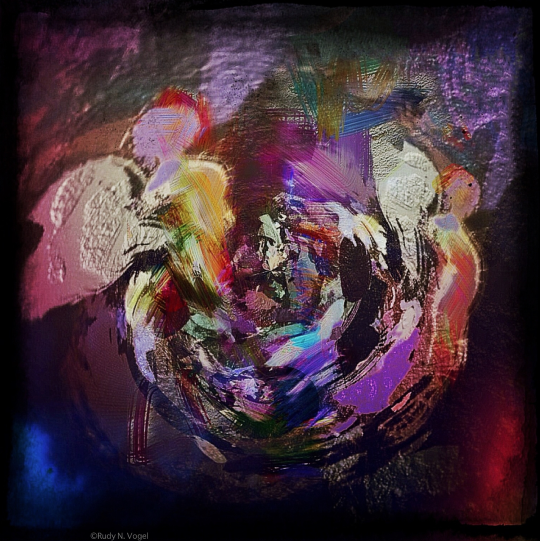 When creating abstracts lines are so very, very important. They create some boundaries and point out irregularities that can be used for dynamism in a piece. I believe the best abstractionists are those that imply their intentions, not overtly but covertly. So, it is critical, in my opinion, to allow yourself the freedom to view reality, whatever that may be for you, in different ways. So, for those readers who are ingesting this article with slanted eye, I pose the following exercise: Take a pen, colored pencil if you like and paper. Then draw a circle, a square, a dot and a line on a piece of paper. Draw them randomly within that space. Then sit back take a moment and peer into that piece of ‘canvas’. What do you see? Do not try to see a random circle, square, dot and line. That’s no fun. Try to see: a cat, a car, a missile, a tree, or a baton leading a symphony. Look at the world skewed, from a tilted view. See it differently. See it for what it could be not for what it is. When you master this one exercise, you will be traveling the road toward mastering abstraction. And, who knows, you just might become the next iKandi-nsky!’

Rudy has traveled the world on business and has thereby inculcated the exotic tastes, colors, and aromas of foreign lands from the Middle East, Southeast Asia, Europe and the Caribbean into his work. Having grown and traveled with his father who was in the fashion business, Rudy learned some of his craft through osmosis and instinctually portrays some hints of textile, fabrics, lines and curves into his art. Rudy has had several private and public showings and his pieces have already worked their way into private collections. His work has been shown at various exhibitions and galleries around the world, including: The Annual Munson Massachusetts Spring Art Show; GaleriaZero, Barcelona, Spain & in Chelsea, London; The Forbes Galleries & The SOHO Gallery for Digital Art, New York, NY; The Los Angeles Center for Digital Art, The Orange County Center for Contemporary Art and, The Giorgi Gallery, in California; and, The Lunch Box Gallery, Miami Beach. Much of his recent work can be viewed at ‘the premiere iPhonegraphic Art Collective in the world’, Pixels At An Exhibition, with the url: www.pixelsatanexhibition.com