We’re delighted to publish the very first of Janine Graf’s ‘iSights’ new column with us. iSights is a Column that we have created for Janine to interpret her images into tutorials for us, other times she’s going to be telling us about her inspirations in mobile photography and art, some weeks she will be expressing her ideas and news about the community. We’re going to leave it to her to surprise us, one thing we do know for sure, is that each post will have a huge splattering of humor and we so love her humor and you will too. Janine’s Column is called iSights which she describes as ‘”a spin on “eyesight” and “sights” meaning “marvels, wonders, visions and more”.

In this first article Janine throws out the feelings of feedback and the creative process, sometimes it can be hard to take the ‘constructive’ criticism and we all know how easy it is to accept the positive, we’re sure you’re going to love this, as we do. Take it away Janine… (Foreword by Joanne Carter).

“My incredibly witty father always said, “Janine, comedy is risky.” I’ve learned that you can’t say to your vegetarian dinner hostess, “I won’t eat it unless it was once loved by its mother” and then expect to be invited back. I’ve learned which friends will laugh at playful politically incorrect remarks, and which ones will unfriend me on Facebook following an unfortunate playful politically incorrect remark. Yep, it’s good to know your audience.

It is also good to know that art is subjective. You can nail a sock to the wall and if it moves you in some way, then by all means call it art. And like art, humor is also subjective; VERY subjective. I learned this first hand with my image titled, “Never Forget”. 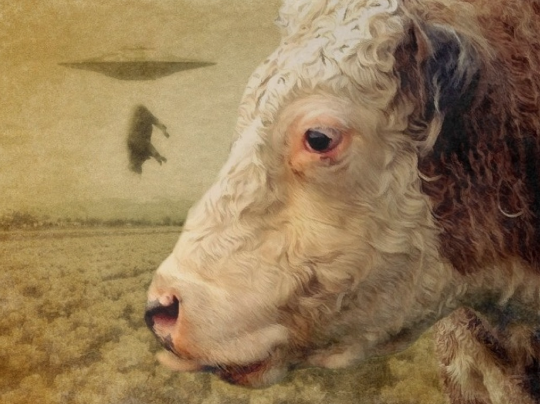 When I started creating the image I knew I wanted this concerned looking cow in the forefront of the tulip field. There was so much empty space to the left of the image that bothered me and that’s when it hit me, “It needs a UFO!” And then it hit me again, “Cow abduction!! It’s a classic!”

Now, I have a pretty quirky sense of humor . . . ok, fine, it’s dorky. I have a dorky sense of humor. When the image was finally finished, I found it funny. I mean, just look at that UFO and its scale compared to the cow . . . how on earth are those aliens going to get her onto their ship?!

I uploaded the image to the various photography sharing sites I belong to and even made it my Facebook Timeline image. It received an assortment of compliments from my contacts and all seemed well in the world, that is, until people started complaining about how offensive they found the image. Offensive? Really? How? Some of the negative feedback was relatively harmless; people just don’t see the humor in cow abductions I suppose. A majority of the negativity was derived from vegetarians and vegans thinking that cows, actually all animals, deserve our respect and shouldn’t be eaten. I agree that all living creatures should be treated with respect, except for mosquitos, but cows need to stop tasting so delicious . . . they bring this on themselves; just my two cents. The doozy though was in the form of a Flickr mail from a person, not even a contact of mine, accusing me of and I quote, “perpetuating the glamorization of animal cruelty.” My mouth literally fell open. And then I cried.

Never before had I created an image that pushed so many buttons. There are many artists out there who thrive on creating images that push people’s buttons, thrive on the controversy their images create. I happen to not be one of those artists. I’m a goofball, not a button pusher. I rescue spiders from my house for crying out loud. “Perpetuating the glamorization of animal cruelty” . . . me?
We artists put ourselves out there because it feels great when we create something that moves someone. It’s a wonderful feeling to know your work is appreciated and accepted by the public; who doesn’t love receiving praise?! It is also important to realize, as I quickly did, that when we expose our work to the public we need to be prepared to take our lumps, along with the praise. Accepting praise is easy. Being able to accept criticism and accept it, really be ok with it, is a definite skill. I’ll be honest, I shed a good many tears over the criticism I received on this image. It was a learning experience and an exercise in developing a thicker skin, which is something all artists need in order to survive. You can’t please everybody and that’s ok. Create for yourself, love it and own it, lumps and all.

So remember, comedy is risky, art is subjective, and no cows were abducted or probed in the making of this image”.