We’ve just published this comprehensive review by Egmont van Dyck on the recently launched TinType SnapPak by Hipstamatic. It’s very extensive and we think you’ll enjoy this a lot, over to you Egmont (foreword by Joanne Carter).

“With the release of Hipstamatic’s new Tintype lens and two accompanying film cartridges recently there has been a very positive response throughout the social network system. I myself immediately downloaded the new SnapPak and after just two exposures, felt it was necessary to do an extensive lens/film test, since the results obtained were intriguing.

It was Hipstamatic creative director Aravind taking the lead on how to bring the old traditional look of old daguerreotypes into the digital world of mobile photography. The process proved to be a technical challenge for the team and from my view point, I think they certainly pulled it off with many added benefits as you will see in the following test.

A problem that has been reported by a number of users is it’s ‘sluggishness’ and though it is true, from what I have experienced it is so when using Tinto 1848 lens with either the D or C-Type Plate film, but not so much when using either film with another lens combination. Hipstamatic co-founder Ryan Dorshorst says “The technology and design behind this SnapPak is by far our most complex to-date. Therefore, it takes a bit longer to process these prints than when using our other lenses and films.”

The greatest surprise came when using C-Type film with other lenses. Many of the test images offered beautiful subtle colors and tones, making C-Type film cartridge one that can be applied mostly across the board for beautiful results.

On the other hand, D-Type film does not have such a wide variety of changes and this is understandable and should not be considered as a negative. I found several images had beautiful rich tones, making this also a useful film for different types of subject matter. 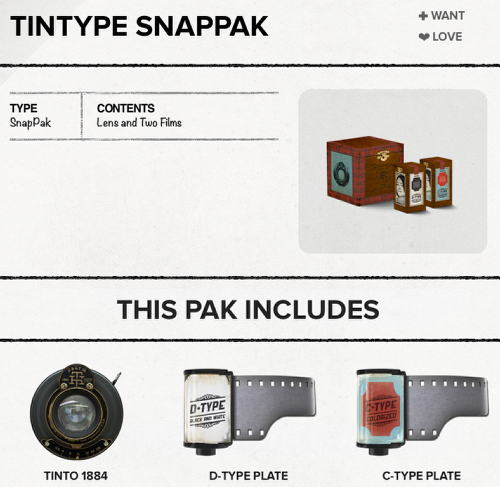 Just taken a few ‘random hand-held’ exposures cannot constitute a lens/film test since it is not undertaken in a controlled environment. Certain conditions have to be met to have results that are consistent This means the primary light illuminating the scene should to be the same from one frame to the next, and the camera and subject matter must be the same from image to image so that the all the results can be compared with each other.

Though SnapPak Tintype was designed for use in portraiture, due to its central focus point and overall shallow depth of field, this lens/film test is based upon a still-life set, as many of you, including myself will be using Tintype for other subject matter then just portraiture.

Gathering numerous items, a still-life is build on the dinning room which is parallel to a large window, exposed to the North for that perfect indirect light favored by portrait photographs like Irving Penn. With the iPhone 4S secured within a DiffCase, that is mounted to a tripod, the set is fine tuned and fill cards and gobos are added to either bounce light into the set or block any light.

Note: All photographs are straight from the iPhone 4S. There was no manipulation of any kind other than to resize and insert final image into a template that was resized and saved for the web. 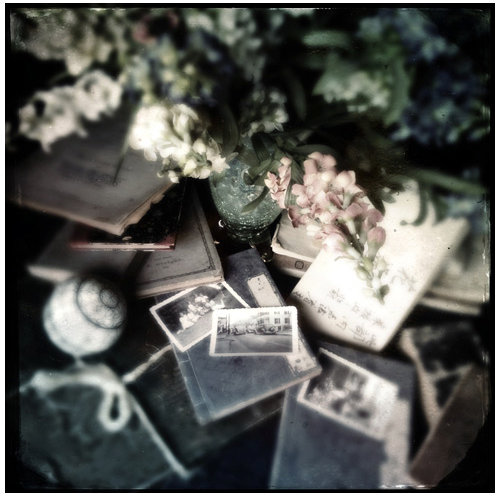 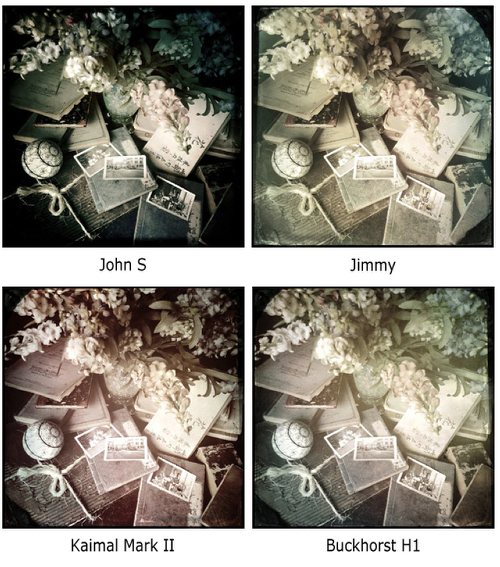 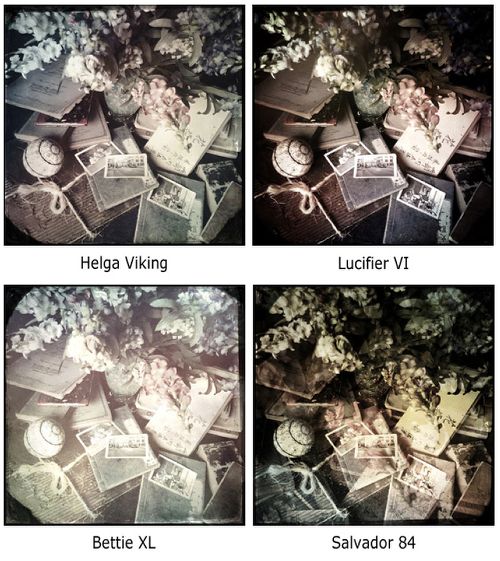 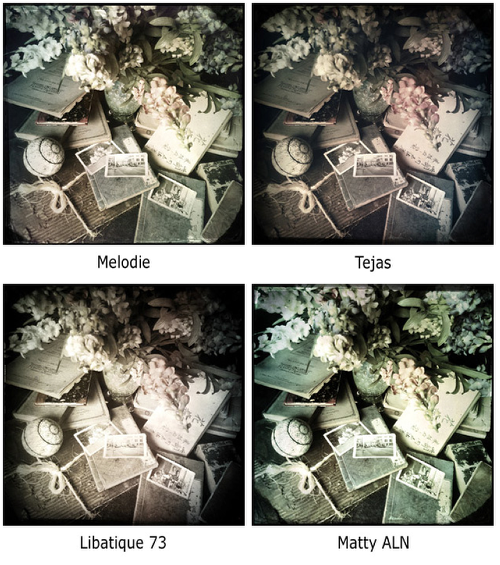 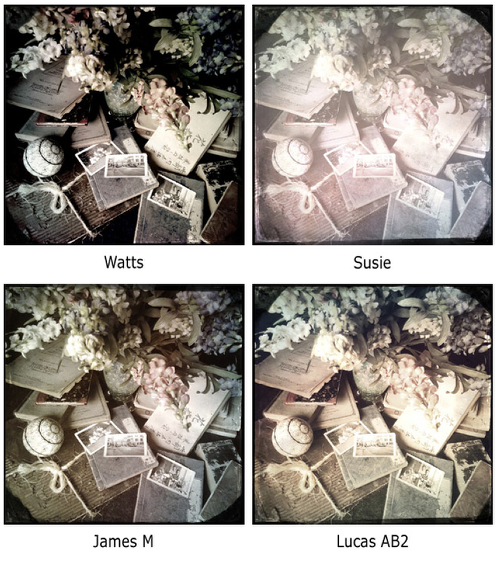 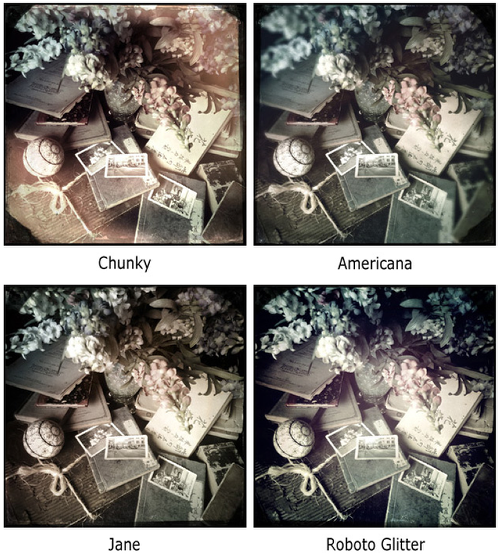 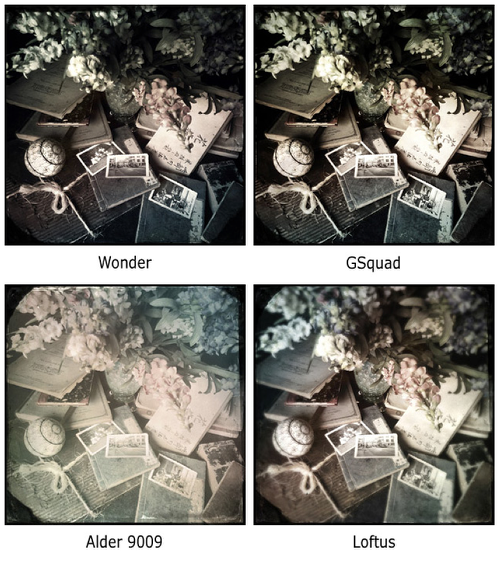 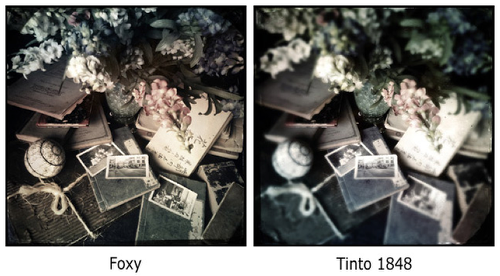 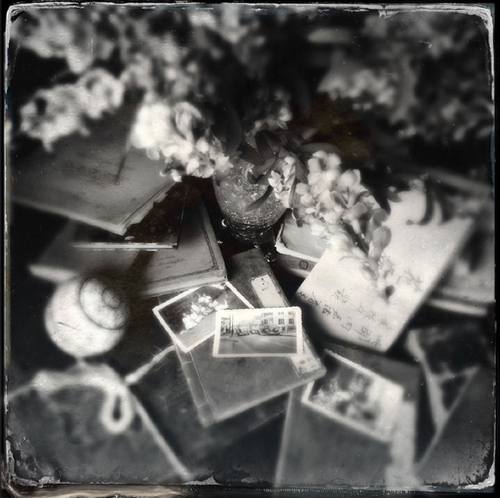 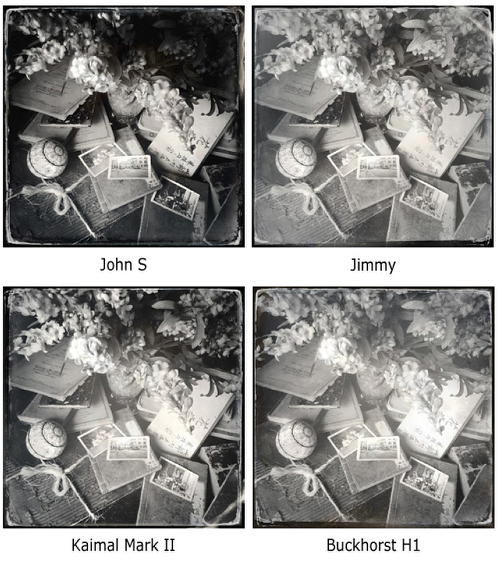 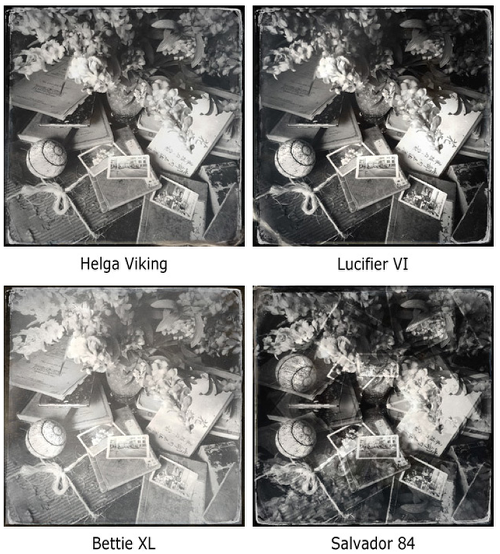 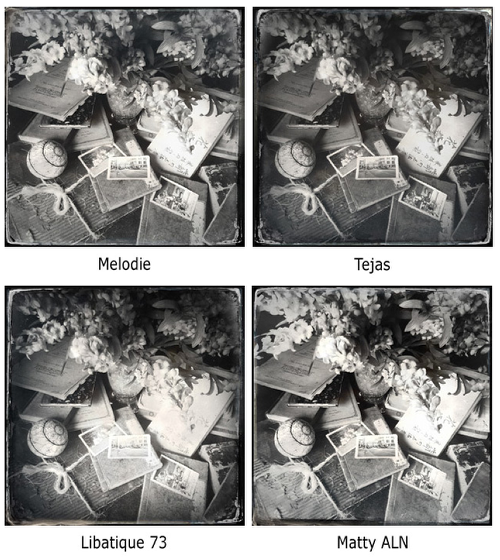 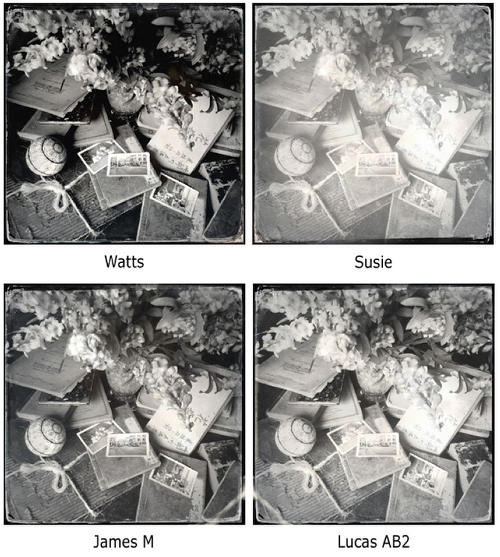 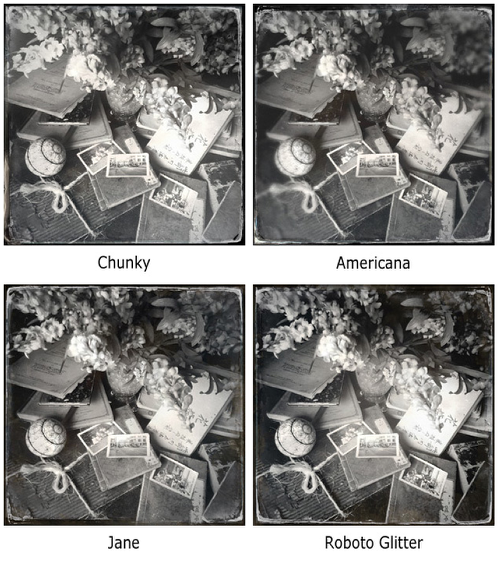 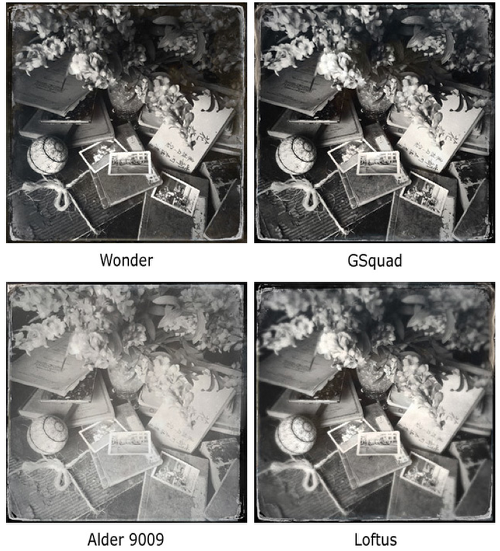 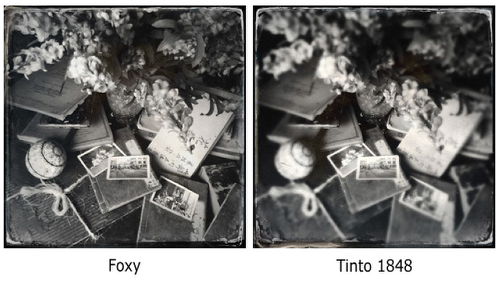 The results with the following lens and C-Type Plate combinations were good and would work for many photographers:

Lucifier VI, more contrasty, but similar to John S, only warmer,
with a touch of rose color
Tejas, beautiful even gradation and natural soft colors with a hint of rose
Matty ALN, light green monochrome
GSquad, contrasty with some detail loss in highlights
Tinto 1848, contrasty with limited focus area

Preferring to shoot in black and white, I like my prints to have rich darks, pure whites and a full range between the two with no detail loss on either end of the spectrum.

Using the John S lens with D-Type Plate film does not disappoint, this includes Lucifier VI. For a more even range but still rich blacks, you might want to try Tejas, Watts, Americana or Jane and while Roboto Glitter is similar to Jane, it doe have a warm tone to the overall photograph.

The Wonder and Foxy lens are also very similar in their results and either of the lenses lend themselves very well for all subject matter were retaining detail in either range is important. Between Tinto 1848, GSquad and Lucifier VI, they all share a shorter range and so are more contrasty in their final results.

My favorite D-Type Plate film combinations are especially with Foxy, followed by Tejas, and Americana. For a deeper range I just might go for my old standby John S lens, but also Wonder or if a little more evenness is desires, my other favorite,lens Jane.

Lenses not mentioned should not be dismissed but, in my opinion, have less appeal for serious fine art photography, yet could be applied well for multi-layered collage photographs.

There are three criticisms I have with the TinType SnapPak. I feel Hipstamatic missed a good opportunity by not including a camera case designed especially for the Tintype set. A nice wooden camera case with antique brass fittings that are little shop worn, would have added to the beauty of the Tinto 1848 lens, because now I have no a case to do justice for this wonderful package.

Though I really like the D-Type Plate film’s border, the repetitive recurrence of a particular triangle shape in the lower right hand corner, just about excludes the film for doing a series and that is very disappointing, especially since it is perfect for a series of portraits.

In the end, I am very pleased by Tintype SnapPak. It is going to be very hard for me to decide which combination of C-Type and lens to select for a good portion of my photography, especially since my favorite color combination has been Jane lens with a DC (Domenica Catelli) film cartridge and John S lens with Claunch 72 Monochrome film. Now I will be creating a couple new saved favorites.

Having worked as an advertising and editorial photographer, Egmont is exploring the potential and limitations of the smartphone, in particular the iPhone 4S as a camera and its roll in reshaping the definition of photography and its direction as an artistic medium. Egmont also publishes the website - 'theiphonearts.com'. 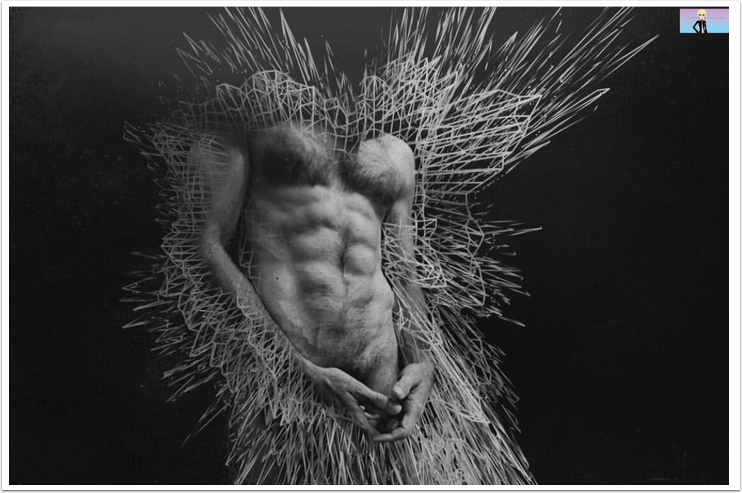 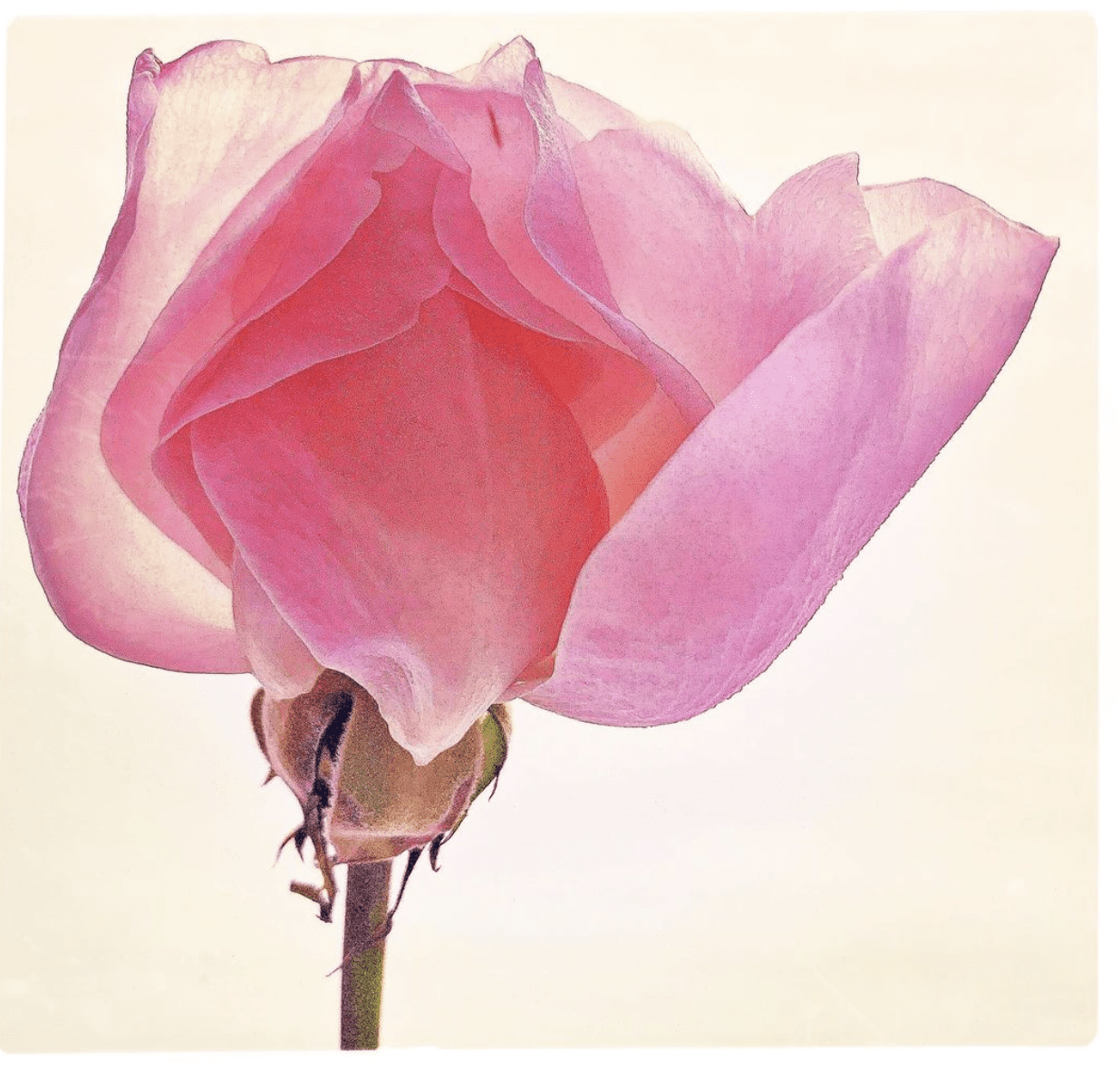