We’re delighted to publish Benamon Tame’s third article to his new column PictureBook. In PictureBook Benamon concentrates on the the story behind the image. As Benamon himself describes it: ‘As Photographic artists we do not just capture stories but create them, the journey behind and the image we present. PictureBook draws on Images selected from my own story series but will also look at the work of the other story tellers within the community’.

“There was no weather in the Toy Room but sometimes fragments fell from the distant roof. They would drift down like a sepia snow and cover the floor and faded rugs. Janus span into the drifts that moved in his corner of the toy room, his two faces became as one. The pale blue of his eyes becoming a thin line across the blur of his face before disappearing into the image, spreading like watercolor. Like a metal skirt, the spinning top flared beneath his conjoined body, a riot of colors that became lost in the dust as the clouds spiraled around him and the room faded from his view.
In the middle of his dance memories flickered like a kinetoscope and he remembered another life and time when Janus was more. But the memory felt sharp and he span away, pushing the past back into the dust.

Images of Syster emerged, smiling face and unsmiling touch. His own face against himself. Words and moments lost in swirl, a tumble of meanings and reasons. Running to and away. To forget and to remember all in the turning.

Light caught a fallen speck and he was lost in the reflected star, never wanting to leave and make the moment forever. He emptied himself into the light but it would not last so he span on. 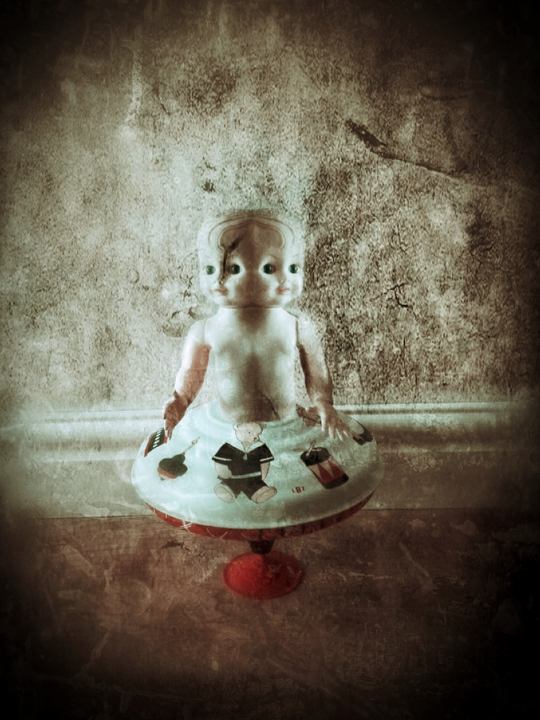 © Benamon Tame – ‘Of Those Left behind – Janus’

The month of January was named after Janus so it is auspicious to tell his story now.

Janus started as an image of twins, Masha and Dasha, dancing dolls in Cossack uniforms and a prized place within the old toys room. The twins were a gift brought back from a business trip aboard, cherished as a rare moment shared with an absent father.

I took the two dolls to the day when the toy room awoke and saw them fall. That first day pushed the majority of the toys into one of two groups, those who thrived and started new lives and those that were caught in the past. For those that cannot move on their existence has become twisted by their trauma and who they are is now defined by it. The twins were overwhelmed by their abandonment and with it the fear that they would lose each other. Neither will say now who first proposed they become one, who was the stronger of the two and forced his will upon the other, but their desperate idea was overheard by Syster and with glee resolved to help them. They wished to be together forever to dance and Syster took their words and gave it to them. Dasha and Masha became Janus and would always dance upon a spinning top.

Janus’s spin still holds them to that moment, forever rushing together as brothers but also pulling apart from the moment they lost themselves. A sacrifice in memory of loss, and the fear of another. 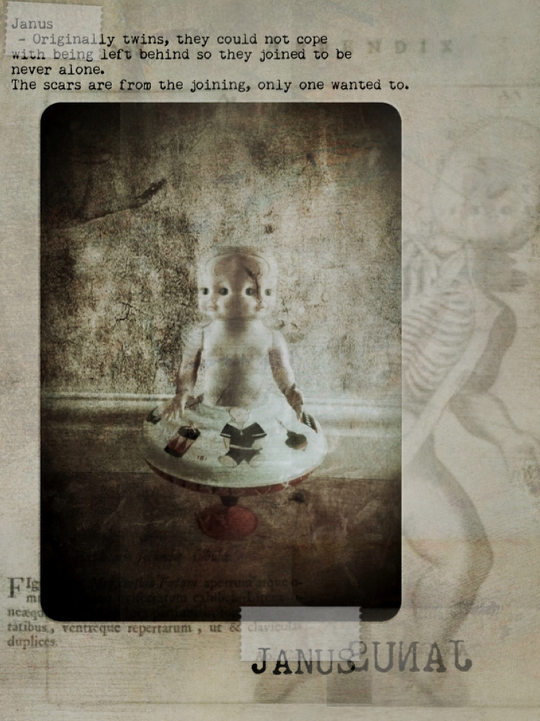 © Benamon Tame – Of Those left behind. Typewriter remix

For naming, as with my other toy, I looked to mythology and found Janus. Janus is the Roman god of beginnings and transitions and is portrayed as a two headed man with one head looking to the future and one to the past. His attributes tie in perfectly with the toys, part of a new future but bound to the past. Janus is also the God of doors and gateways, the toy room door an ever present reminder of what the toys had and is now denied to them, other doorways have been found but they are barred to them (but that tale is for another time).The toys original names were taken from Masha and Dasha Krivoshlyopova who were Russian conjoined twins. 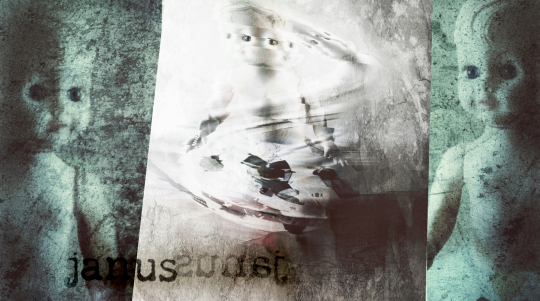 © Benamon Tame – Of those left behind. Memories in the dust remix

Janus was the first piece I used to explore the lost in the toy room and to imagine the effects of children’s play on a toy if it was actually aware or in this case could remember how they were played with and then abandoned. The games of children swing between love and violence, a toy can be an inseparable companion and the centre of a child’s universe but forgotten and cast aside in a moment.

I still find the song Puff the Magic Dragon the saddest thing and echoes the tale of Masha and Dasha and so many in the toy room:

A dragon lives forever but not so little boys
Painted wings and giant rings make way for other toys.
One grey night it happened, Jackie paper came no more
And puff that mighty dragon, he ceased his fearless roar.

His head was bent in sorrow, green scales fell like rain,
Puff no longer went to play along the cherry lane.
Without his life-long friend, puff could not be brave,
So puff that mighty dragon sadly slipped into his cave. oh!

(From Puff, the Magic Dragon” written by Leonard Lipton and Peter Yarrow)

In creating the piece the initial image was built using Juxtaposer and Diptic. Texture and adjustments were added using Iris Photo suite, Snapseed and PictureShow. For the Typewriter remix Lo-Mob, Blender, Phonto and Labelbox were also used. For the Memories in the dust remix Decim8 was also used in addition to the apps already mentioned”. 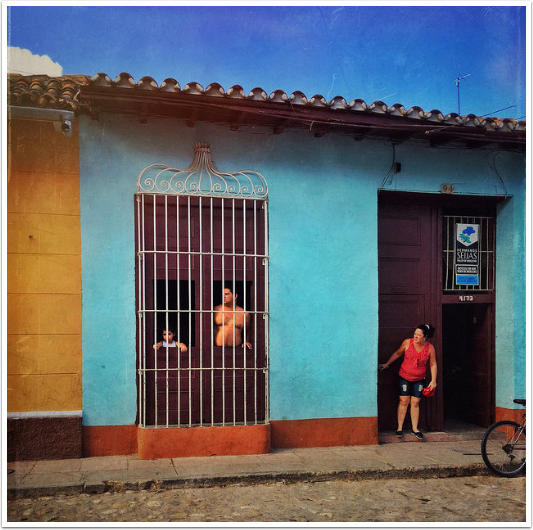 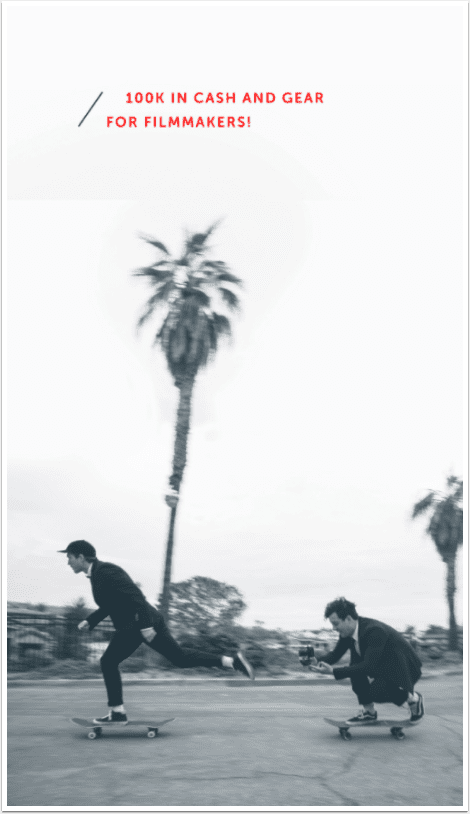 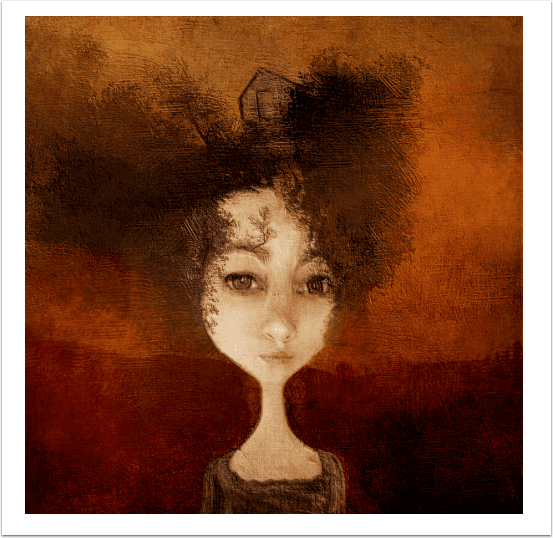