Reallusion the developers behind Big Lens and the award-winning leader of 3D and 2D Cinematic tools, has introduced the mobile version of CrazyTalk to iTunes Store. CrazyTalk is unique. Unlike other talking app programs, CrazyTalk allows you to directly interact with characters in an instinctive way by providing you with truly natural controls over characters. It lets you animate with the power of your voice, fingers and wrist movements. Users are able to puppet projects, add automatic lip-syncs, generate volume sensitive performances, save their projects and directly share on YouTube, Facebook and through emails.

In the last 6 months, Reallusion has won two renowned Mac awards for CrazyTalk. Reallusion’s CrazyTalk7 (CrazyTalk desktop version) won “Mac App Store Best of 2012” and “Macworld Best of Show 2013” on its first entry into the Mac market. Now Reallusion have turned this award winning technology into an iPhone and iPad app. Every user can now experience the new wave of animation creation.

What Makes CrazyTalk Different From Other Talking Apps- Touch, Move and Animate? 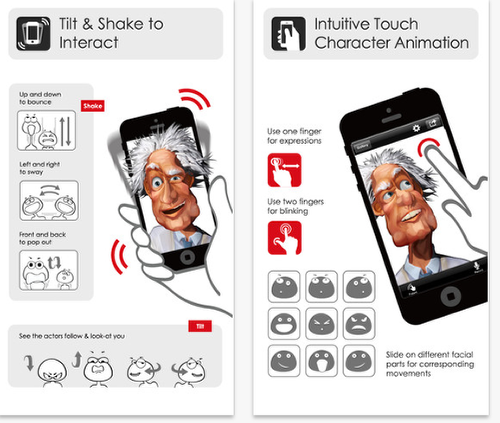 Reallusion make the animation truly different based on your own unique control. Reallusion focus on intuitive animation. With very few buttons, on the user interface, CrazyTalk app can generate very natural animation based on your MOVE, your VOICE, and your TOUCH.

CrazyTalk Is Not Just an App!

CrazyTalk is a new way to enhance media communication and social interaction. It’s a natural visual revolution to the intuitive iDevice which already comes with touch, motion sensor, even in the future for Siri voice recognition. The CrazyTalk app aims at being one of the most intuitive, simple, yet powerful companion in anyone’s pocket; delivering fun, form, functionality and fantastic life-life results every time.

Additionally, CrazyTalk marks the beginning of a multi-platform animation ecosystem that allows users to create content on their desktops, upload to a cloud server, to later animate and share on their iDevices; making CrazyTalk one of the best paired applications today.

CrazyTalk users will enjoy future updates for both function and content to enhance the CrazyTalk mobile experience. Function packs will be available to unlock additional features including Voice Morphing, which allow users to instantly morph their voice to many different options; Puppet Recording feature, which will enable users to create and layer their very own unique motion detail by touching, swiping and shaking. Content add-on packs include new, dramatic characters each with their own personalities and their own Auto Motion styles for use in different scenarios.