We’re delighted to publish our latest Technical Tutorial by Jerry Jobe, this is the second of a two-part tutorial based on two apps, Fotomecha and ClassicSAMP, they take multiple exposures and put them into grids.

We published the first part featuring Fotomecha last week, if you missed that, please go here.

Over to you Jerry (foreword by Joanne Carter).

‘Last time I discussed Fotomecha, an app which shoots multiple photos and combines them into a single image. Now I’ll cover ClassicSAMP by misskiwi, an app with the same basic function but a few twists.

There’s no splash screen or menu for ClassicSAMP; you are taken directly to the viewfinder to start shooting. 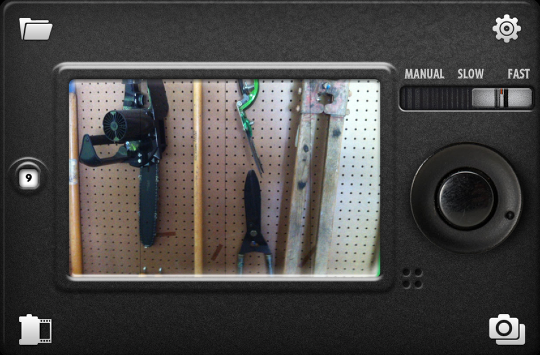 There are four buttons in the corners. Clockwise from upper left, they are the Folder, which takes you to your “developed” photos for sharing; the Gear, or Settings; the Camera, which allows you to choose from grid patterns; and Film, which allows you to choose among 16 films (as opposed to Fotomecha’s 6). The well-worn Shutter button is to the right, and the slider above that controls the interval between shots – Manual or two Auto intervals, Slow or Fast. The number to the left of the viewfinder does not seem to have any function.

If you look at the viewfinder carefully, you will see the guidelines which indicate that we are currently in the “four strips” mode familiar to you from the last discussion. Once you trip the shutter, you will see an indicator light up in the middle of the viewfinder that indicates where the shot just taken was placed in the grid.

You do not choose whether the result is to be saved as in Fotomecha. Instead, the result is automatically saved in the Camera Roll. It is also saved in-app, in the Folder, for easy sharing. Tapping the Folder takes you to the following screen, which has a trash can to delete the in-app image, a Share button in the center, and a Return arrow to return to the camera. 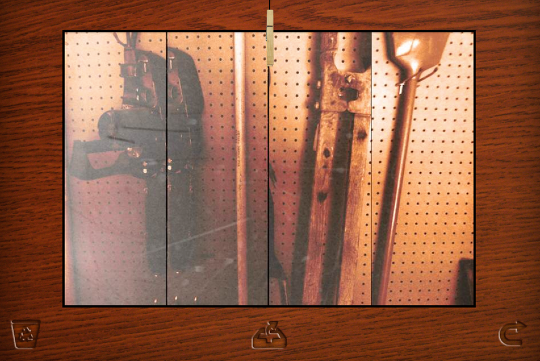 Below is the image saved on the Camera Roll. Don’t worry; the quality of the image is due to my using a Vintage film for this particular photo. 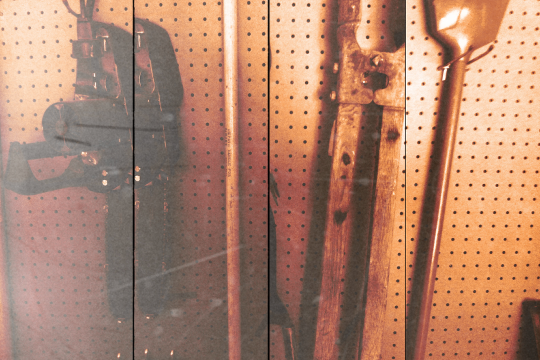 Sharing options are limited to Twitter, Email and opening the image in another app. 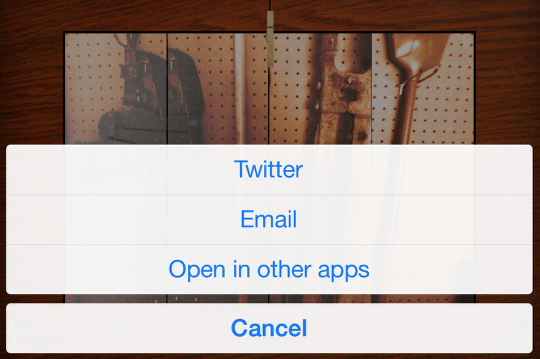 The possible apps to which you can send the image are scrollable horizontally. 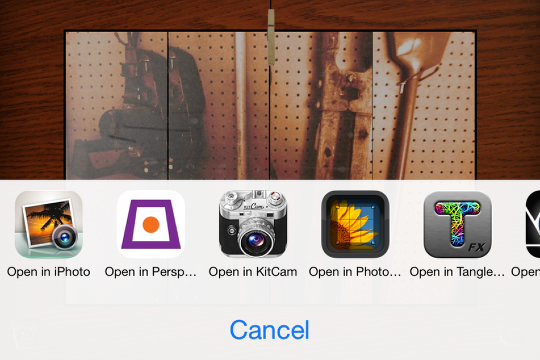 The Settings, found under the Gear button on the camera, are few but powerful. Just like Fotomecha, you are able to create high-resolution images and activate the flash. Instead of vignetting, ClassicSAMP has Light Leaks to add to the photos. The Auto Orientation, as far as I can tell, does nothing. But the setting that sets ClassicSAMP apart is that it allows you to use the front camera to take interesting selfies. 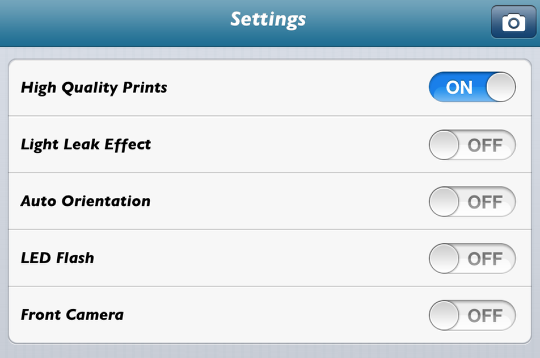 Pressing the Film button takes you to the Film selection. The 16 films, accessed by scrolling up and down, are:

Most are self-explanatory, but If you have the time to experiment, try some of the last five. Here’s the Vintage that I used in the example above. 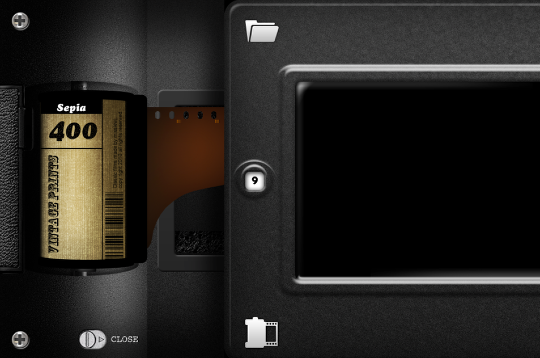 Pressing the Close button takes you back to the camera; sliding will not do. 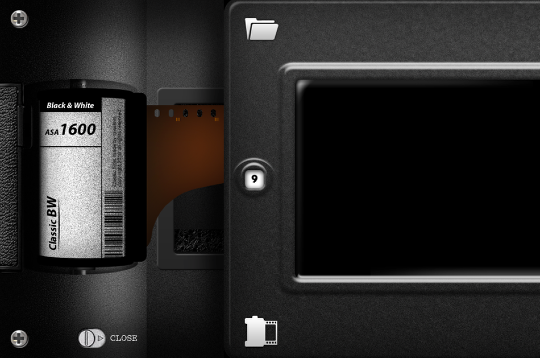 The grid options are accessed through the Camera button. Each grid type has a different camera body color, so you can know which grid you’re using when you look at the back of the camera. The first one, which is black, is the 4-strip layout. 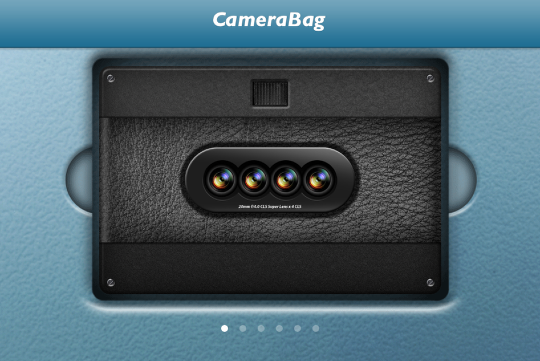 Next we have a 2×2 grid on the white camera. 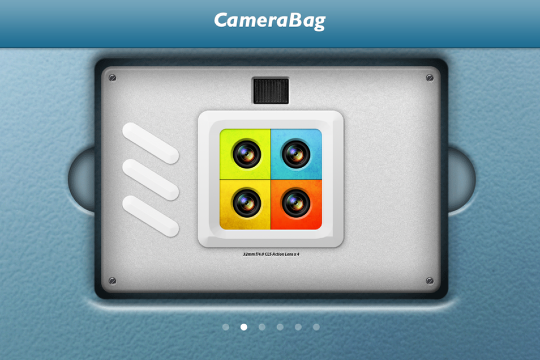 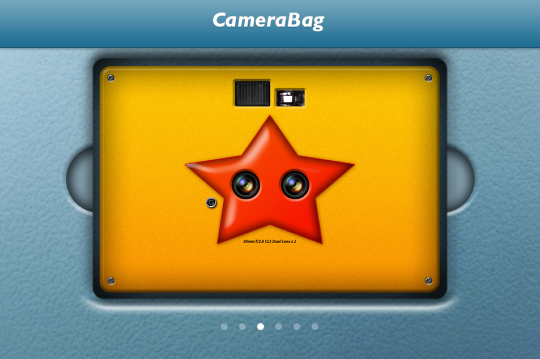 The orange camera takes three photos. Contrary to the lens layout shown, this grid is one large photo on top with two smaller underneath. 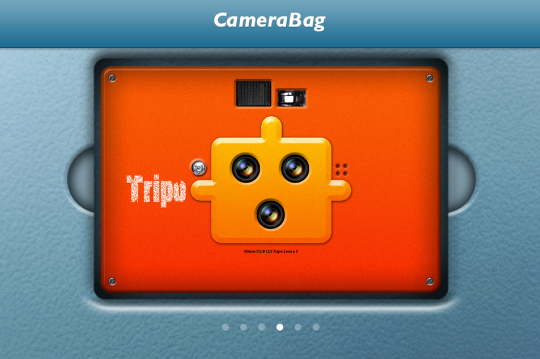 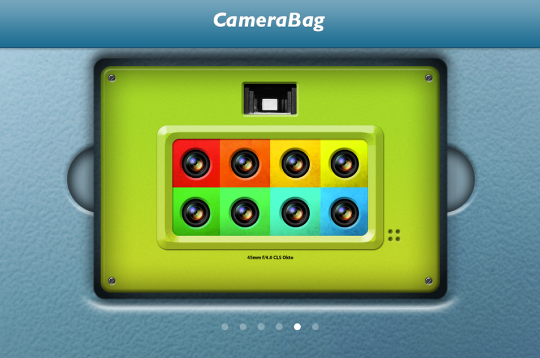 Finally, the silver camera is a 3×3 grid. 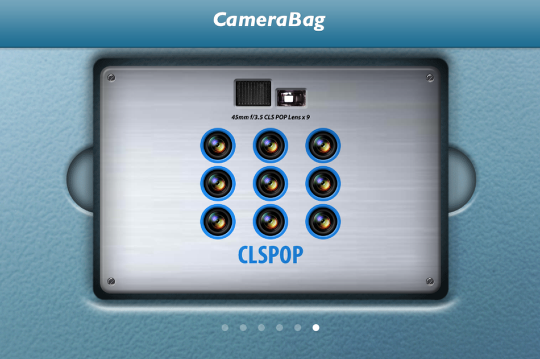 The three-photo grid is interesting. Each photo is the entire width of the viewfinder, which means that the smaller photos are actually shrunken in comparison to the large one. 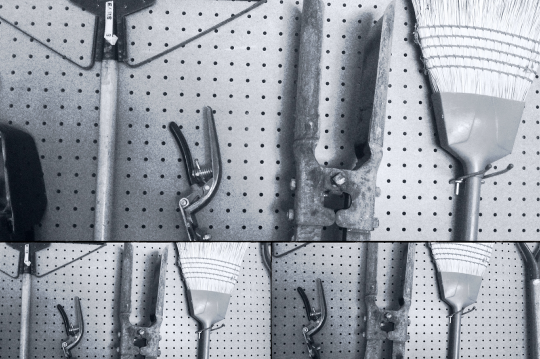 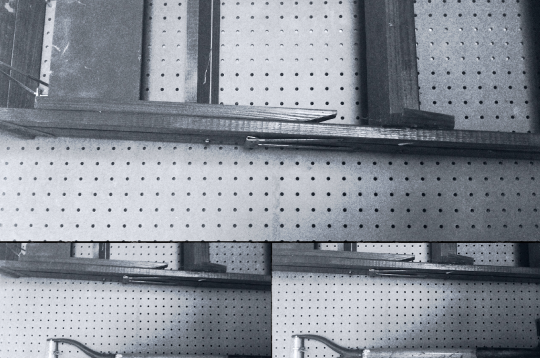 I thought I’d wrap up with a few examples of ClassicSAMP output. First, a 2×2 grid of the back of my car, using Color Positive film. 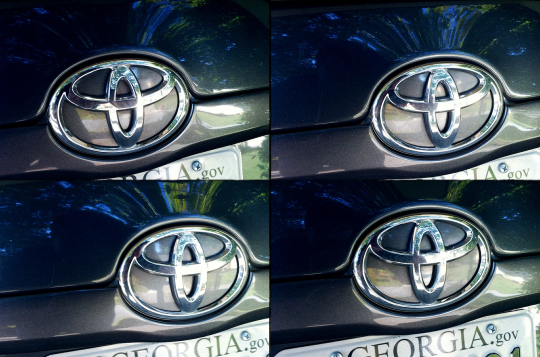 Next, a cement driveway. 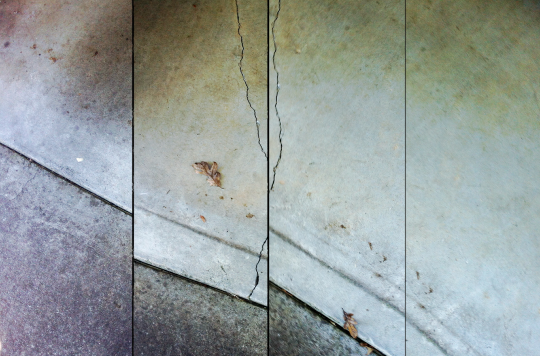 Here’s a selfie using the front camera. Notice the image is the smaller resolution one would expect with that camera. 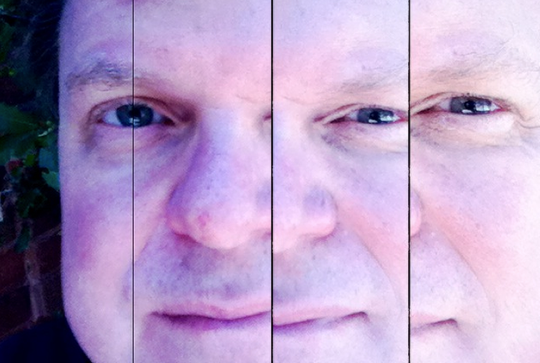 I thought a black and white treatment would be nice. 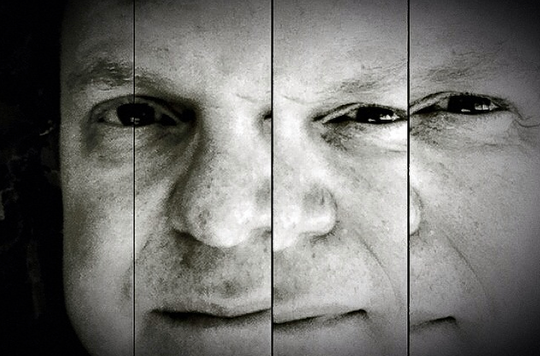 Or perhaps recolored with iColorama. 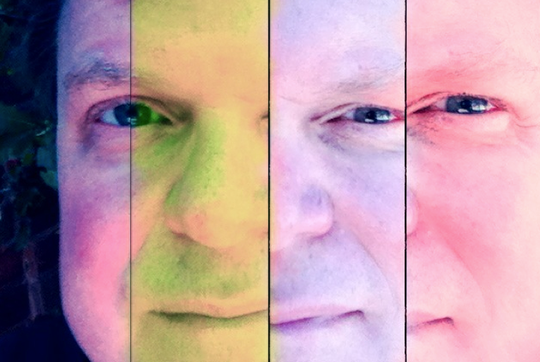 If you like the look of a multi-photo image, take a look at both Fotomecha and ClassicSAMP. Fotomecha offers GIF movies, while ClassicSAMP offers more films and the use of the front camera. And don’t be afraid to experiment. Enjoy!

I leave you with a piece created with a portion of the selfie above blended with the cement series. I call it “Remains to Be Seen”. 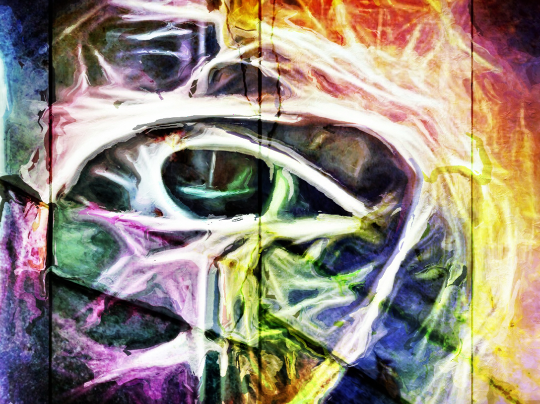 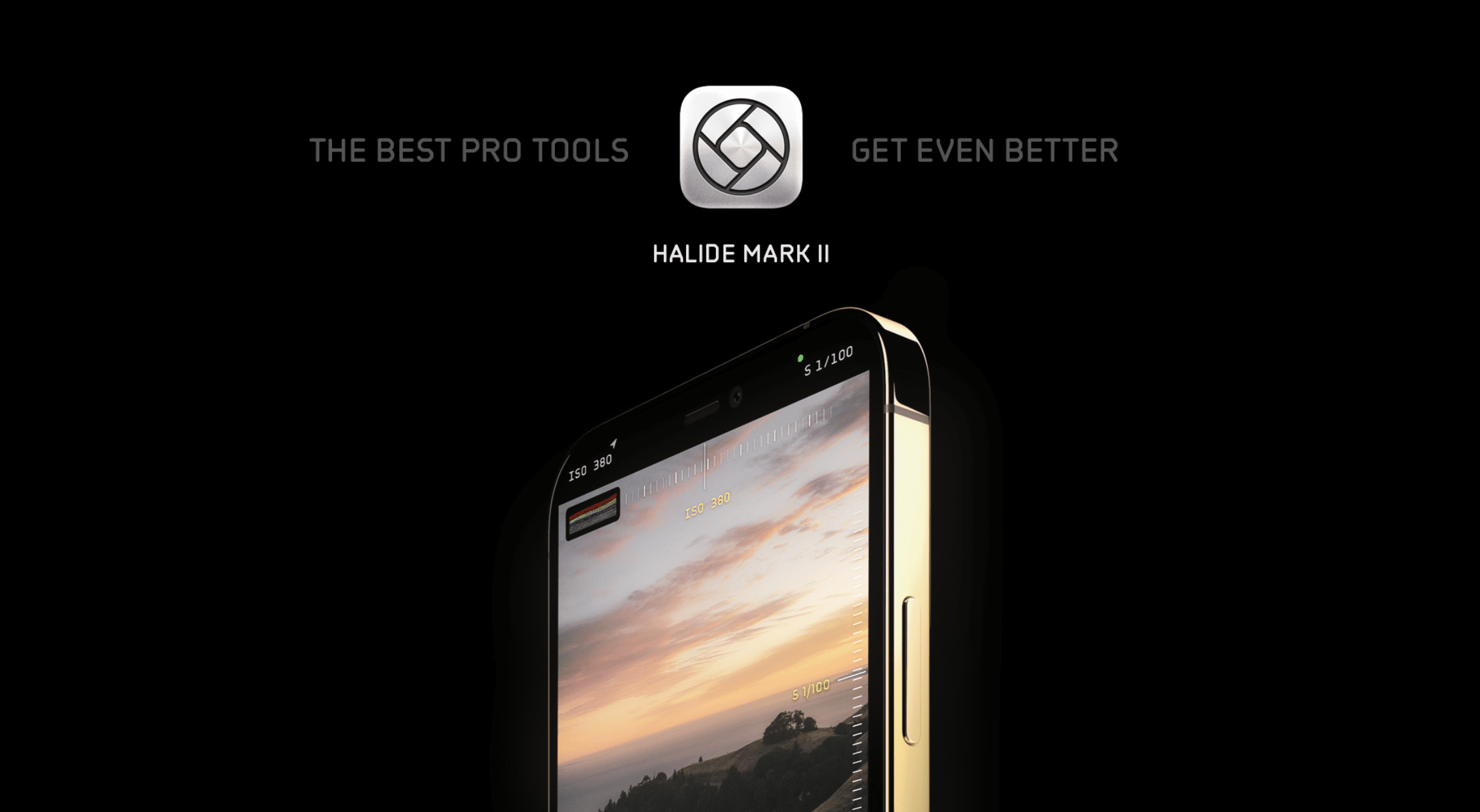 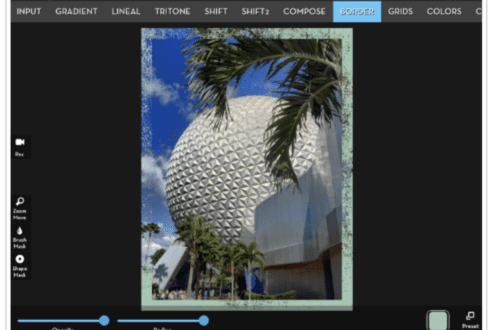 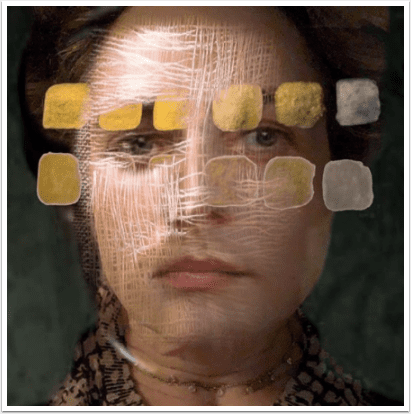