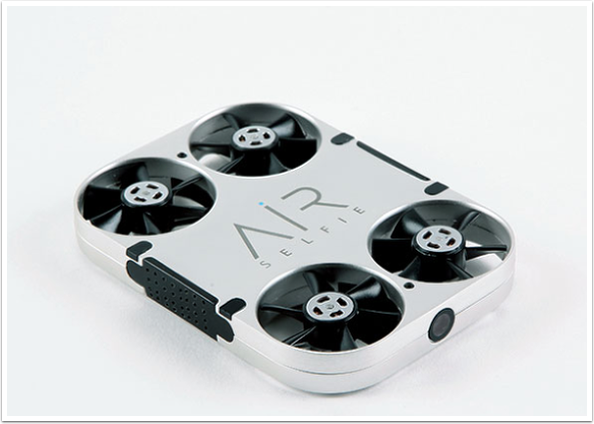 AirSelfie, the first pocket-sized flying camera that integrates with smartphones, is now available to pre-order in the UK following a successful Kickstarter campaign that drew backers from all over the world. The stylish drone allows users to capture the perfect selfie from angles never before possible and is set to raise the selfie game nationwide in 2017.

Selfie-lovers can pre-order AirSelfie on the official website: www.airselfiecamera.com. There are two available package: AirSelfie + phone cover (£220) or AirSelfie and powerbank (£229).

Comprised of four powerful propellers and a 5-megapixel video camera, AirSelfie is smaller than a smartphone and can fly vertically up to 66 feet, allowing users to take aerial selfies of themselves and their friends. The device connects to the most popular smartphones, including iPhone (6, 6s, 7 and 7 Plus), Google Pixel and Samsung Galaxy S7 Edge. The device includes self-generated WiFi and comes equipped with a rechargeable battery through a cell phone case, as well as the option to purchase an external power bank. Additionally, a vibration-absorber system and in-flight stability systems guarantee stable, clear, flowing images.

With AirSelfie, users can:

Edoardo Stroppiana, co-founder of AirSelfie, commented, “We’ve worked very hard to create a product that everyone can use to live a totally new experience. To be unveiling the product to the public is a momentous occasion for us and we can’t wait to see the amazing selfies people can now capture.

“Our Kickstarter drew thousands of backers from 81 countries across the world, so we knew that the AirSelfie was going to be popular – it’s going to be a real game changer for selfie-lovers everywhere.”

AirSelfie debuted on Kickstarter and reached its fundraising goal in the first 72 hours. The project soon became viral with its videos and photos spreading all over the web.

AirSelfie has just started the AirSelfie Team Tour that will hit major cities across the world, from London to Berlin, from Tokyo to Jakarta, passing through Singapore, from Los Angeles to New York, up to Dubai and Milan, just in time to attend the Milan Design Week. The most important monuments and main landmarks of these nine cities will be shown through the “eyes” of AirSelfie, from brand new perspectives for photos, videos and breathtaking selfies that will spread through the web and social networks with the hashtags #airselfieteamtour and #getanewperspective.

One of the key features of AirSelfie is its ease of use. To activate AirSelfie, the user simply removes it from its case and turns it on. The device connects automatically to smartphones via WiFi — the flying camera creates the WiFi (2.4GHz) network itself and it is immediately ready for take-off.

AirSelfie users must simply download the free iOS and Android app in order to control the device’s movements through three different flight modes. AirSelfie can be returned to its departure point either manually or automatically. When users are finished using the device, it’s easy to return it to its landing spot — simply by pressing the button labelled “slide to land” and AirSelfie descends and turns off. Users can also directly reposition the device by hand with no risk whatsoever of damaging it or themselves.

Using the “selfie delay timer” function, users can take timed photos, giving them up to 10 seconds to get into position and hide their smartphone so that it doesn’t appear in photos. Users can also take up to eight consecutive shots. AirSelfie’s technology integrates directly with social media, making it easy to post photos and videos directly to users’ accounts.

If everyone who reads our website, who likes it, helps to support it, our future would be so much more secure. Please help us by offering a contribution or supporting us with a monthly donation of your choosing.  This is a not for profit website and one that can only grow with your support.