What kind of god would you be? Benevolent or vengeful? Play Pocket God and discover the answer within yourself. On a remote island, you are the all-powerful god that rules over the primitive islanders. You can bring new life, and then take it away just as quickly. Exercise your powers on the islanders. Lift them in the air, alter gravity, hit them with lightning…you’re the island god! All god powers are demonstrated in Pocket God’s help menu.

Don’t miss this latest edition to the awesome Pocket God series, find out What’s New below. 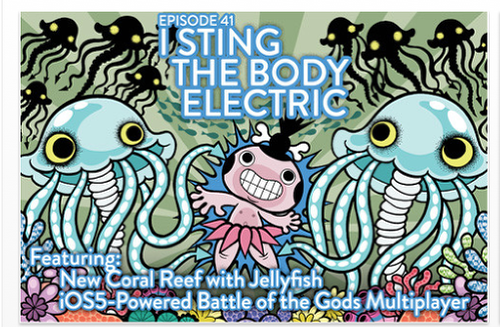 In this update the pygmies find themselves in a wondrous new underwater area, the Coral Reef. But it’s infested with dangerous jellyfish! Take the Episode 41 Challenge, find all the jellyfish features and collect the Jellyfish Idol! 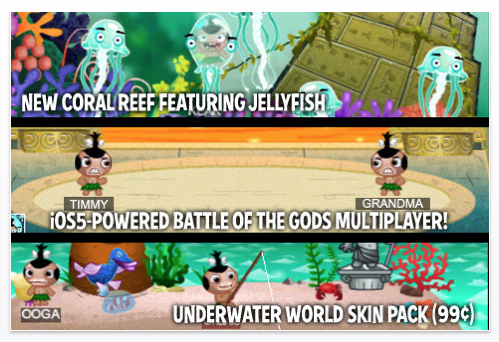 In case you haven’t tried it yet….pit pygmy against pygmy in our new game, Battle of the Gods! Collect at least four idols in the Challenge of the Gods, go to God Island on the map, set idols on the pedestals to open the temple and enter the battle arena. All the gods of the game are the enemies you must battle. The god idols you’ve collected endow your fighting pygmy with a REALM TYPE and ATTACK TYPE. A quirky spin on the basic rock-paper-scissors mechanic, these attributes determine a Realm Winner, which activates special powers, and an Attack Winner which determines who does damage to the opponent.

In order to acquire god Idols, you must take the Challenge of the Gods! While the objective of Pocket God is to explore, experiment and have fun, we now offer a whole new way to discover you god powers. On the start screen, tap "View Challenges" and you will see a menu of Icons for the last 40 episodes. Tap an icon and you will be challenged to go find all the godly powers bestowed upon you for that episode.

Also with this episode is the Underwater World Pack! Turn your islands into an underwater wonderland, complete with coral, a whale igloo and a fish volcano! 99¢ cheap!

Still haven’t had enough Pygmy? Be sure to check out Pocket God: Journey To Uranus, now UNIVERSAL and works on iPhone, iPod and iPad! Episode 5: Planet of the LIving Dead now available on the app store. Coming soon in episode 6 is an all new game "Decapithon!"

Also available on the app store is Pocket God, the comic app, which now includes the beginning of an all new story-arc: "A Quest called Tribe" where the pygmies once again leave the relative safety of Oog Island to rescue the tribe of Sun, the newest character and first female pygmy. 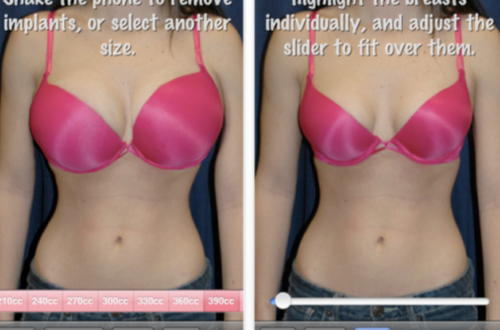