Welcome to the nineteenth edition of “Streets Ahead,” a weekly column dedicated to women mobile street photographers.

Each week we review and curate work that was submitted to our Flickr Group. In addition to creating a showcase video which features a sampling of submitted work, we also highlight a few images that caught our attention… offering some thoughtful commentary about technique, composition, and subject matter.

If you are not a member of our Facebook group… we highly recommend that you join us! This is our space for sharing newsworthy information and conducting discussions (what, when, where, why and how) about Women Photographers/Artists and Street Photography, in general. 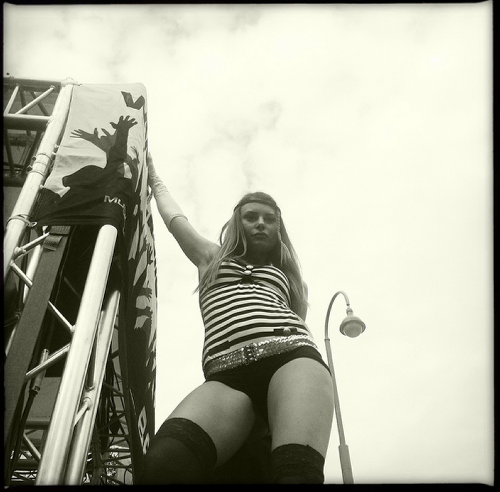 I can’t help but wonder how Christine got this shot! Was she crouched really low or was the subject standing on something? And was she ok about being photographed from that angle?! What a great point of view although I have to admit, it leaves me feeling slightly uncomfortable, but I think that is a good thing in this case…

I love that her arm is raised and it draws our attention to the banner which shows an illustration of raised hands. It makes me want to know more about the story. What is it all about? Great shot! 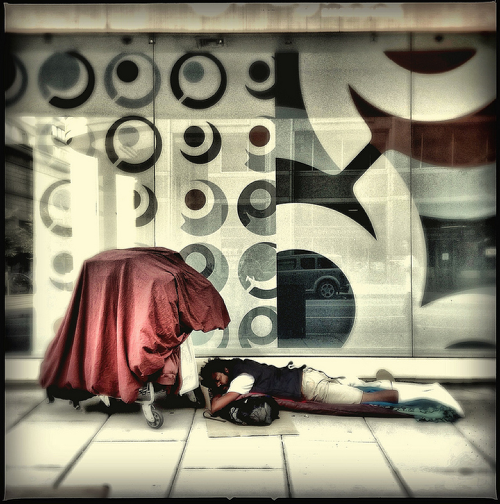 This is part of a series that Cindi is working on, which raises our awareness of the plight of the homeless. Always an uncomfortable subject, with some people of the opinion that photographing the homeless or destitute should be ‘off limits’. Personally, I like this series. It highlights a very real problem that is current in many cities around the world.

I find the composition of this image particularly striking, with the geometric pattern in the shop window behind, and the gentle reflections of the street. It creates a very strong juxtaposition, with the man sleeping in front of the window and his life in a shopping cart next to him. It is interesting that he has draped a red cloth over his belongings and probably, without intending to, has created an almost artistic object in front of the window. A poignant image. 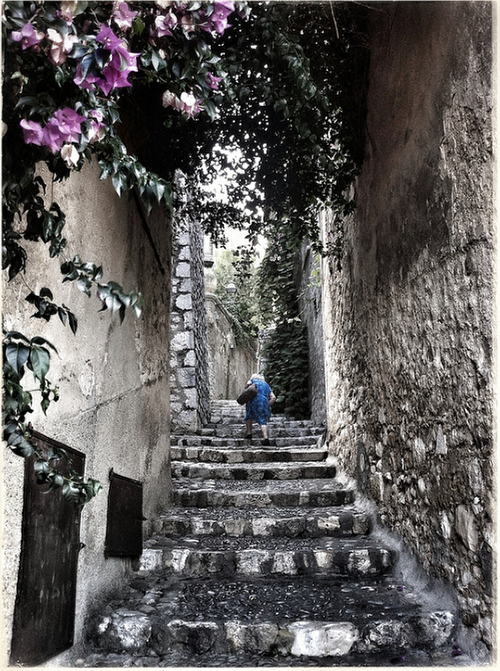 I love that Catherine managed to find this off the beaten track area in Saint-Paul de Vence. For those of you who are not familiar with the area, it is one of the oldest medieval towns on the French Riviera. Well known for its museums and art galleries, this pretty little hill town is full of shops and the usual tourists. This photograph captures the local flavour of the town – the quiet side – which is more true to how the locals live. It is beautifully composed, with the purple flowers nestled in the corner and the foliage gently creeping in to the frame. One can almost feel the pain of the climb up the long stretch of stairs in the stance of the lady dressed in blue. I just hope for her sake that there aren’t any more steps beyond the landing that we can see at the top! Lovely! 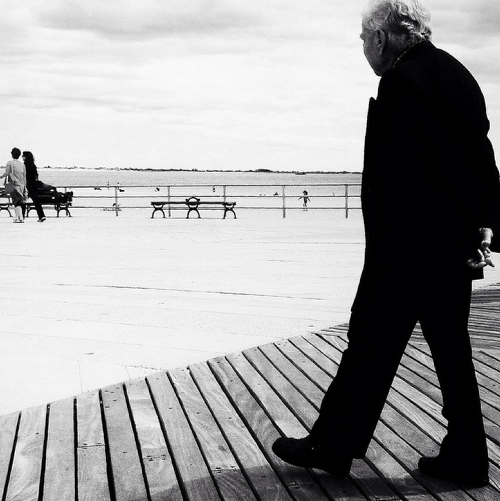 I love the stark contrasts in this image. The man all in black against the pale background. I like the composition of him on the far right, and the two ladies on the far left, with the little figure of the child off centre. We almost see two different triangles – the decking being one, and the triangle between the man, the child and the ladies being the other. The strong lines of the deck almost follow the gaze of the man, and the pattern adds a texture to the image. Well seen Jeanette! 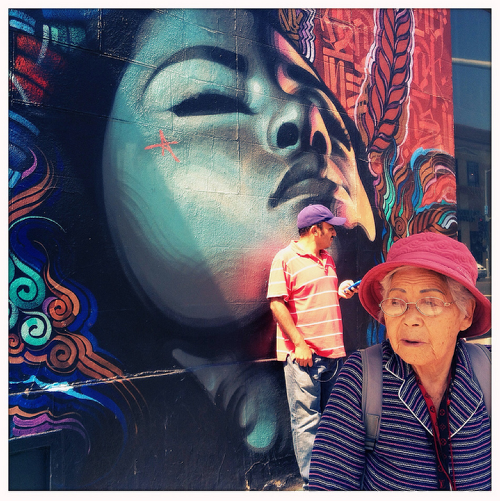 The colour in this photograph is just stellar. Amazing colourful street art in the background, but I also love that Jessy has caught both subjects in the foreground wearing a lot of colour. The man with his purple baseball cap, bright blue telephone and salmon pink shirt, and the lady with her red, white and blue striped blazer and pink hat. One would think all those colours would clash but funnily enough, they all match. The composition is terrific too, with the two subjects in the lower right hand corner against the giant face of the mural behind. Wonderfully seen Jessy!

For me this photograph has an almost cinematic feel to it. Tess has captured an event in the town of Gaucin, and without showing us what exactly the men are carrying, we know that it is an event of some importance, and probably with some religious significance as well. It seems that only one man (the one in the black shirt on the left) has caught her taking the photograph. Something else has caught the attention of the other two men at the front. One can look at this picture several times and pick out so many different expressions on the faces of the people. I like the deep blue-purple tones that Tess used for this and the panoramic format. Perfect. 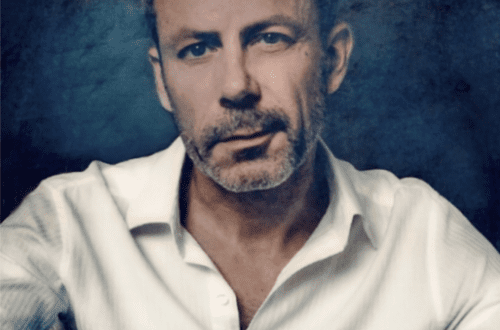 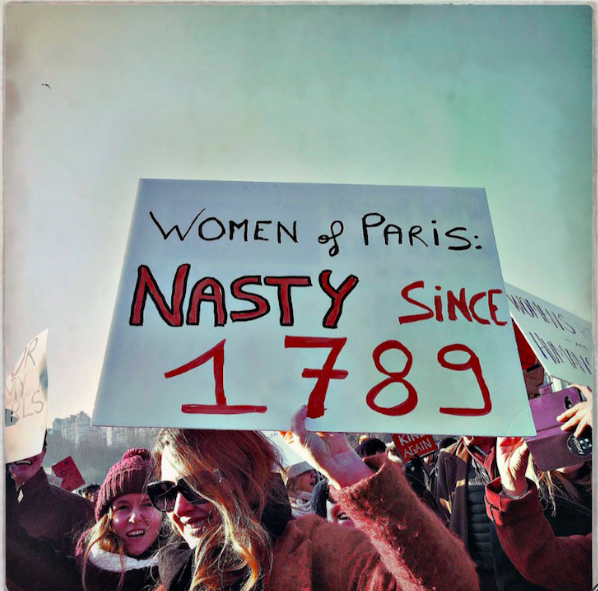