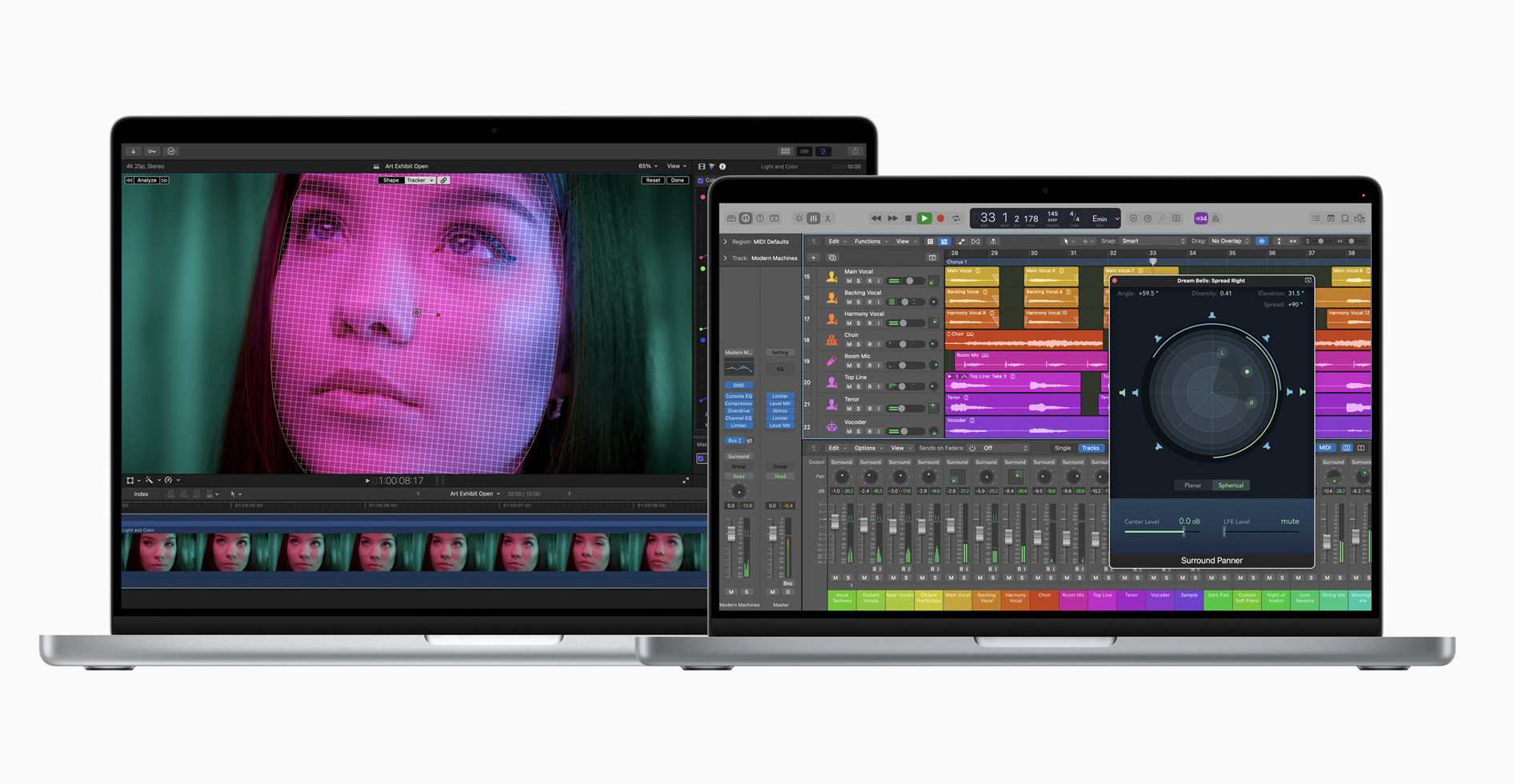 Apple have updated Final Cut Pro and Logic Pro with powerful new features for creative professionals, and optimisations that take full advantage of the power and performance of the M1 Pro and M1 Max chips in the all-new MacBook Pro. Professional video editors using Final Cut Pro on the new MacBook Pro can perform tasks never before possible on a Mac, like the ability to play seven streams of 8K ProRes or colour grade 8K HDR video with the new Liquid Retina XDR display — a first for any notebook. Final Cut Pro also introduces a new Object Tracker that uses machine learning to automatically detect faces and objects, and match their movement to create beautiful, cinema-quality titles and effects on any Mac. Logic Pro, Apple’s pro music creation software, now comes with a complete set of tools for authoring spatial audio music — allowing anyone to mix and export their songs in Dolby Atmos for Apple Music. And musicians can use up to 3x as many plug-ins for recording on the all-new MacBook Pro with M1 Max. Final Cut Pro and Logic Pro are Universal apps that build upon the breakthrough performance and pro capabilities of macOS Monterey, and both are available today on the Mac App Store.

“The world’s most creative people use Final Cut Pro, Logic Pro, and the Mac to make the memorable movies, TV shows, online videos, songs, and soundtracks that we all enjoy,” said Bob Borchers, Apple’s vice president of Worldwide Product Marketing. “With the combination of powerful new features in Final Cut Pro and Logic Pro, and the unprecedented performance from the MacBook Pro powered by the all-new M1 Pro and M1 Max, pros will be able to push the limits of their creativity like never before.” 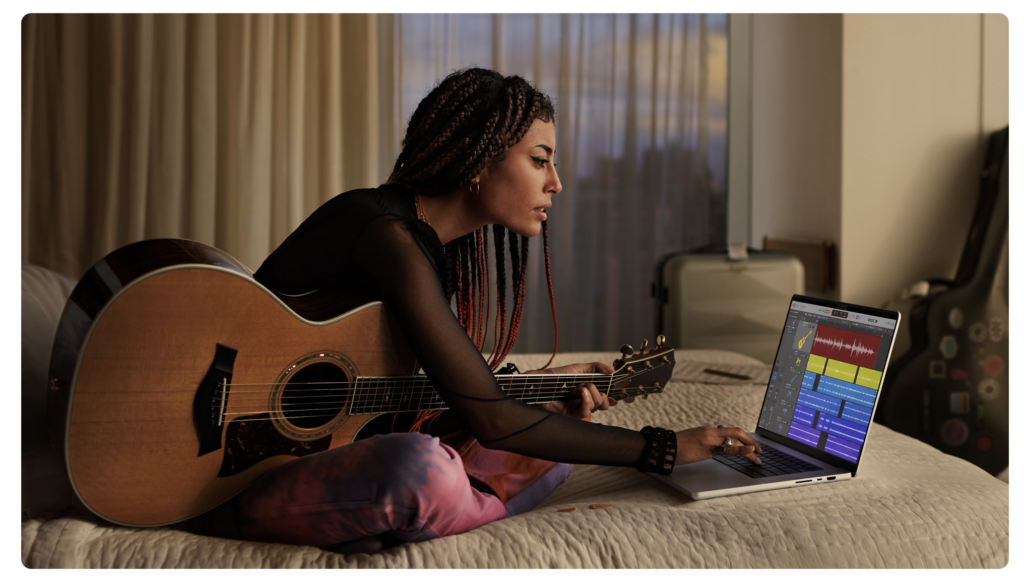 Final Cut Pro comes with innovative new features that allow editors to create beautifully tracked motion graphics and edit Cinematic mode videos recorded on iPhone 13 and iPhone 13 Pro. The app also takes full advantage of the major performance gains enabled by M1 Pro and M1 Max in the all-new MacBook Pro. Video editors can now play seven streams of 8K ProRes at full resolution — over 230 million pixels — and export ProRes video over 5x faster than before. Today’s update also introduces a new Object Tracker that lets video editors quickly and easily create eye-catching animated graphics that follow the movement of faces or objects in a video. Object tracking analysis is up to 5x faster on the new 16-inch MacBook Pro, and takes advantage of the machine learning capabilities of the Neural Engine in Apple silicon to accelerate the detection of faces and objects in video. 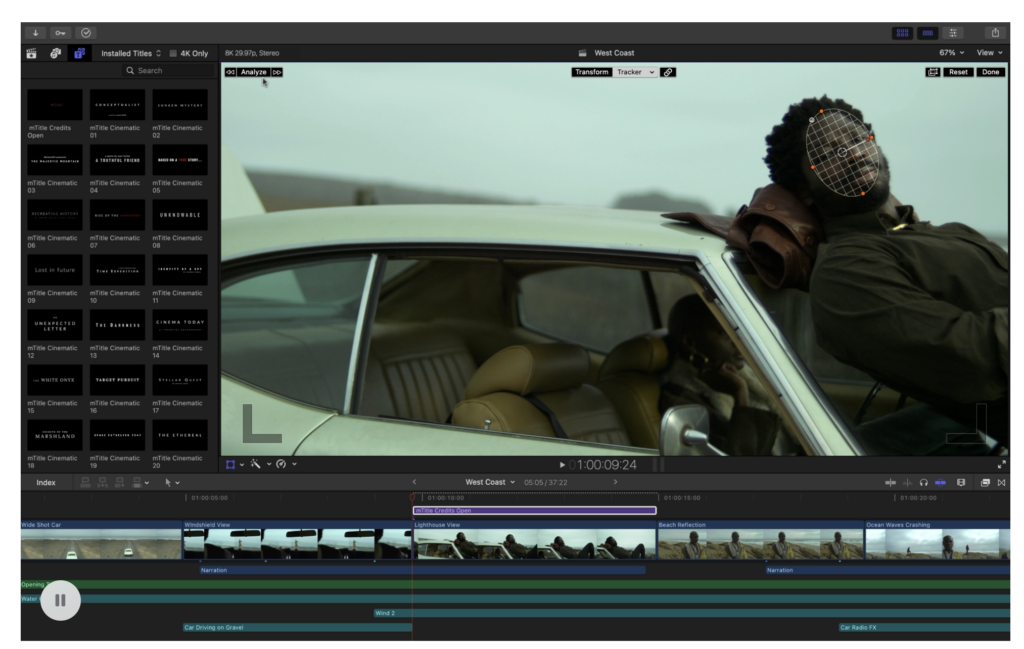 Videos recorded in Cinematic mode on the new iPhone 13 lineup can be edited easily with Final Cut Pro and Motion, giving editors the ability to adjust the depth effect of any shot and use keyframes to change it over time. By simply clicking on a face or object in the viewer, editors can add or delete focus points, all without having to reshoot. 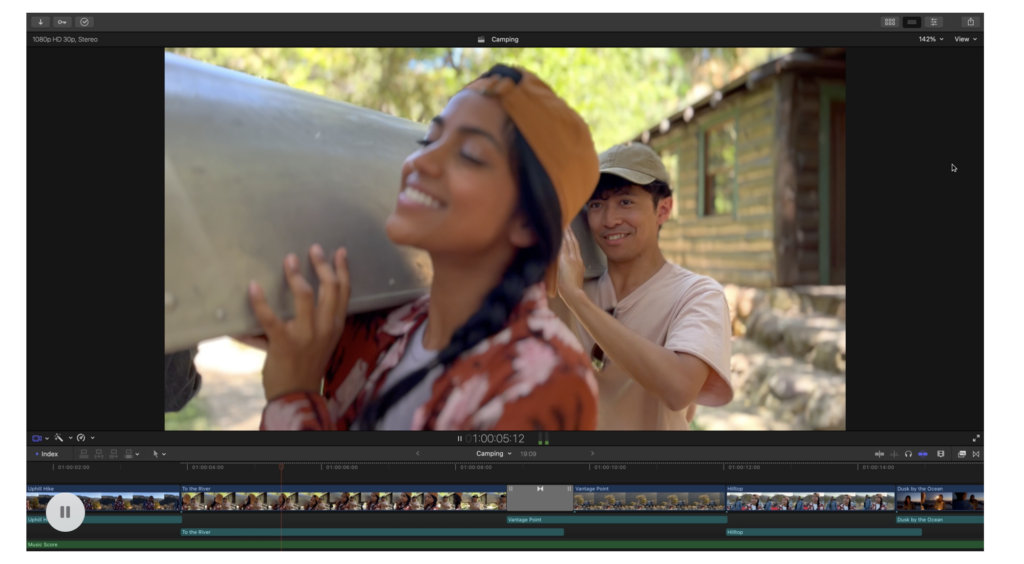 On the new MacBook Pro, Compressor can transcode HEVC video up to 2x as fast and transcode ProRes video up to 10x faster. Compressor can also transcode Canon Cinema RAW Light video files to other professional formats like ProRes and H.264 for the first time, and Watch Folders make it simple to automatically encode content placed in a selected folder in the file system.

Spatial audio represents the next generation of sound with its revolutionary audio experience and true multi-dimensional sound and clarity. Now with a complete set of mixing and rendering tools, Logic Pro allows anyone to author their songs as Dolby Atmos music files compatible with Apple Music. Musicians, producers, and mix engineers can expand their stereo projects to the surround channels supported by Dolby Atmos, using new mixer and panner controls. In addition, 13 plug-ins within Logic Pro — including Space Designer, Limiter, Loudness Meter, and Tremolo — have also been updated to take advantage of this new creative capability. Once the songs are published to Apple Music, listeners will be able to enjoy the immersive audio experience on their devices with spatial audio support. With the new MacBook Pro, musicians get workstation-class performance for creating massive spatial audio mixes, can quickly load large sample libraries, and can use up to 3x more plug-ins for recording. 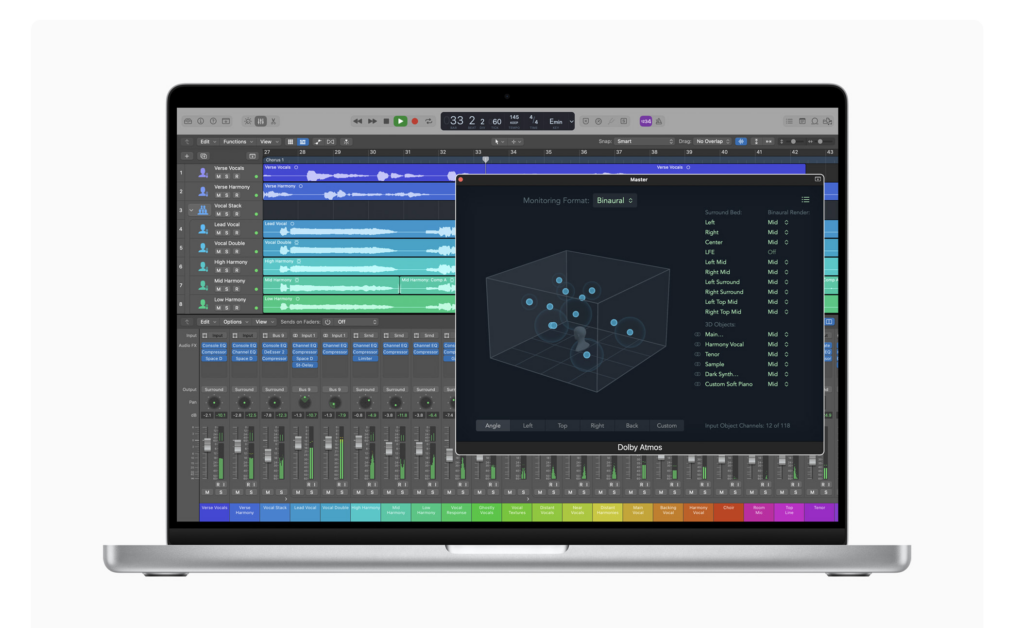 Logic Pro now comes with all the new Producer Packs1 introduced in GarageBand this summer. Musicians can use beats, loops, and samples created by today’s biggest hitmakers, including Boys Noize, Mark Lettieri, Mark Ronson, Oak Felder, Soulection, Take A Daytrip, Tom Misch, and TRAKGIRL. Logic users now have access to 2,800 new loops, 50 new kits, and 120 new patches they can use in their own songs — all royalty-free. The update also features the original multitrack project of the hit song “Montero (Call Me by Your Name)” by Lil Nas X — including a Dolby Atmos spatial audio mix of the track. 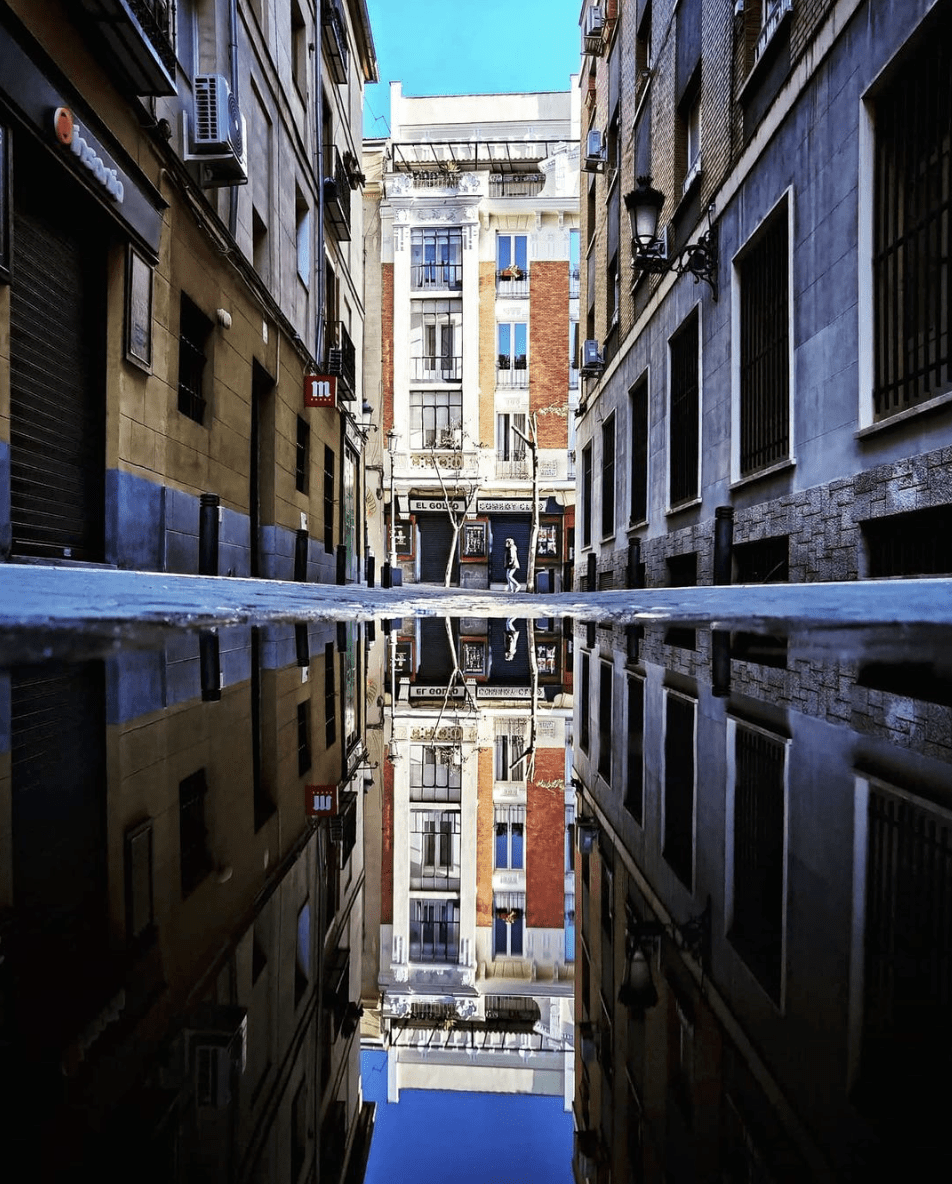 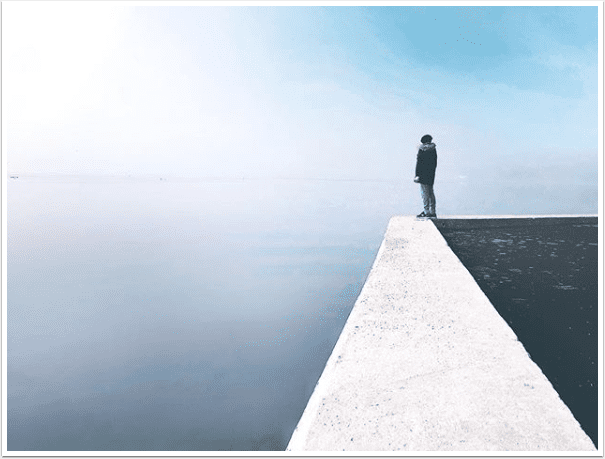 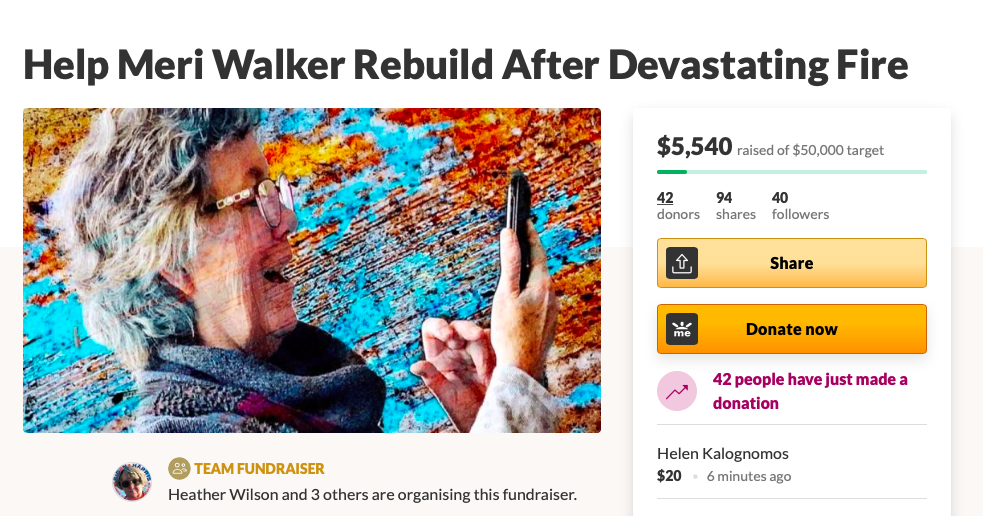