Fortune are running a report based on new research from Canaccord Genuity analyst T. Michael Walkley, it compares Apple’s performance in the mobile/smart phone industry to that of its competitors for the first half of 2010.

Apple sold 17 million iPhones during the first half of the year, a tiny fraction of the 400 million handsets sold by top manufacturers Nokia, Samsung, and LG combined. But when looking at industry profits, Apple snagged 39% of the pie while the other three companies combined to take only 32%. At the end of the day, it’s only profits that count, right? 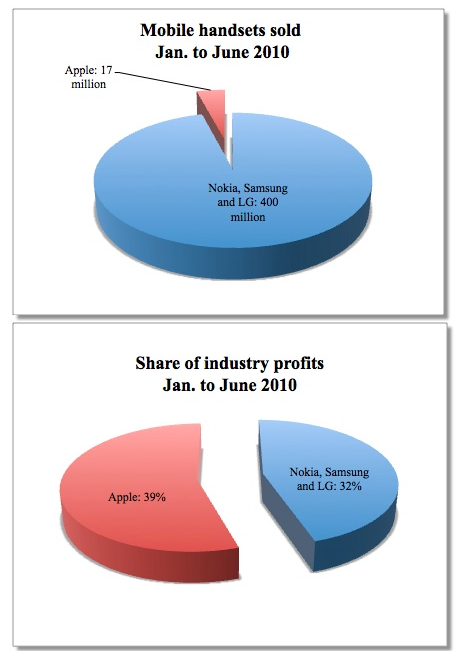 ‘We are also impressed with Apple’s ability to monetize its innovative products through selling high-margin consumer products that drive strong earnings results and growth trends for Apple shareholders. A case in point is the mobile phone market, where most handset OEMs struggle to post a profit or even 10% operating margins (except RIM and recently HTC), while we estimate Apple boasts roughly 50% gross margin and 30%+ operating margin for its iPhone products’. So says Walkley, going on to say, ‘Apple leads the industry in every metric except for unit share.