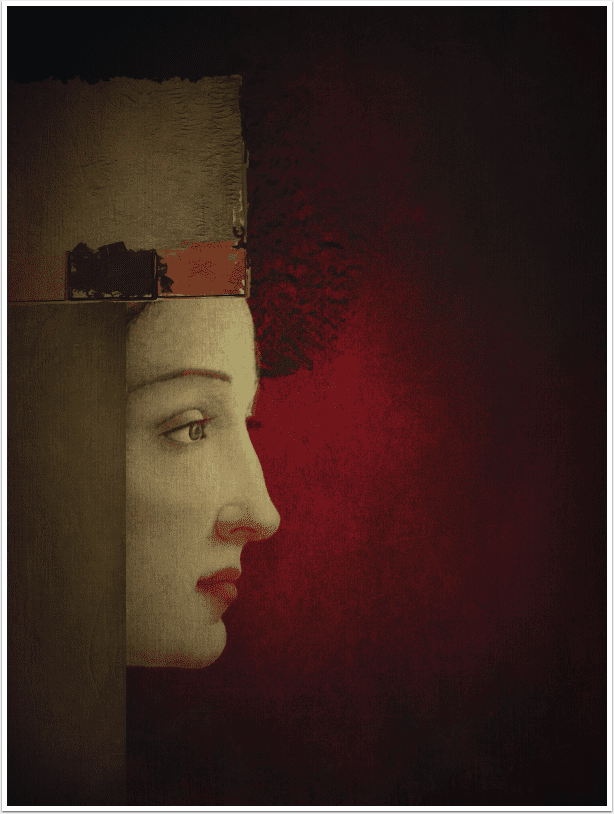 Recently, you may recall that we posted our third in a new series of articles entitled ‘Weekend of Mobile Photography/Art‘. That one was with Alexis Rotella our first was with Jerry Jobe and our second with Fiona Christian, our third with Amanda Parker and this weekend Clint Cline tells all! Take a look…

“My weekend with Sando Botticelli

Because I work daily in the communication arts as a writer and designer of print, digital, and video works, my weekends are often eclipsed with projects spilling in from an overstuffed week of To-Do’s. But on the occasional weekend where I find myself without an armload of project briefs or honey-do lists, I heed Cicero and burrow in the practice of new things and unexplored ideas.

When Joanne asked me to consider sharing my weekend, I was coincidentally researching inspiration from the early Renaissance masters for an Easter series I was doing on the  Resurrection of Christ. Her invite arrived as I was studying the classic, almost sculptural, forms of Sando Botticelli’s early Renaissance works. So I decided, in the spirit of Jerry Jobe, to pick an image and take you through my steps of transforming it into a contemporary piece”. 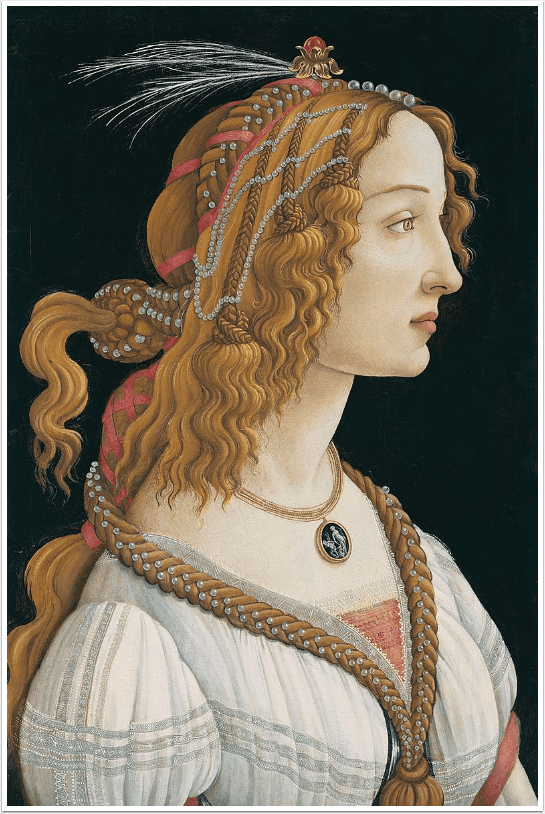 Botticelli’s “Portrait of a Young Woman” was painted somewhere in the early 1480’s. I was struck by the almost porcelain stoicism in her face. As much as I appreciate his attention to the details of her wardrobe and hair, I chose to isolate her facial features, which would require some serious cropping. And a background on which to build the new piece.

Earlier in the week I’d snapped a shot of fresh paint on the wall of my son and daughter-in-law’s new apartment. 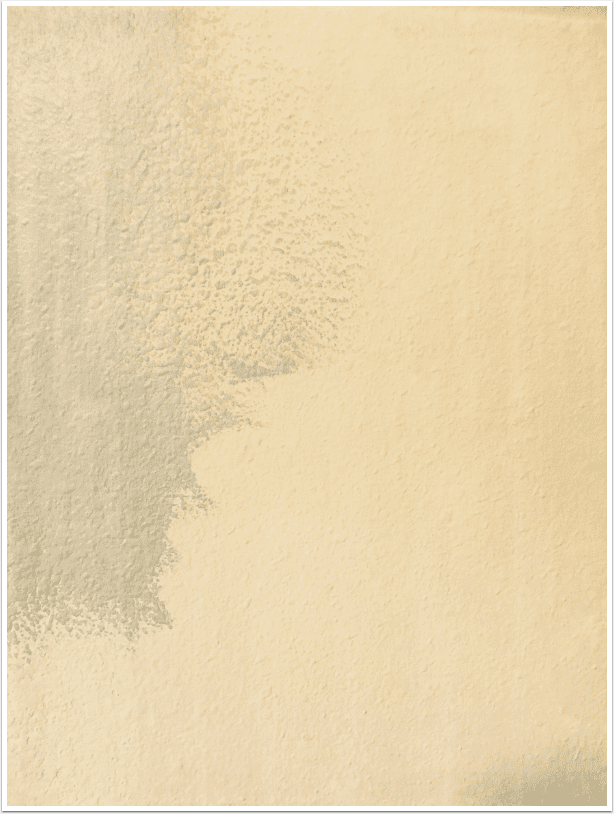 I liked the texture and contrast so I applied a Mextures formula to deepen the contrast. The color wouldn’t matter since I was about to apply a color overlay to make the background simpler and more dramatic. 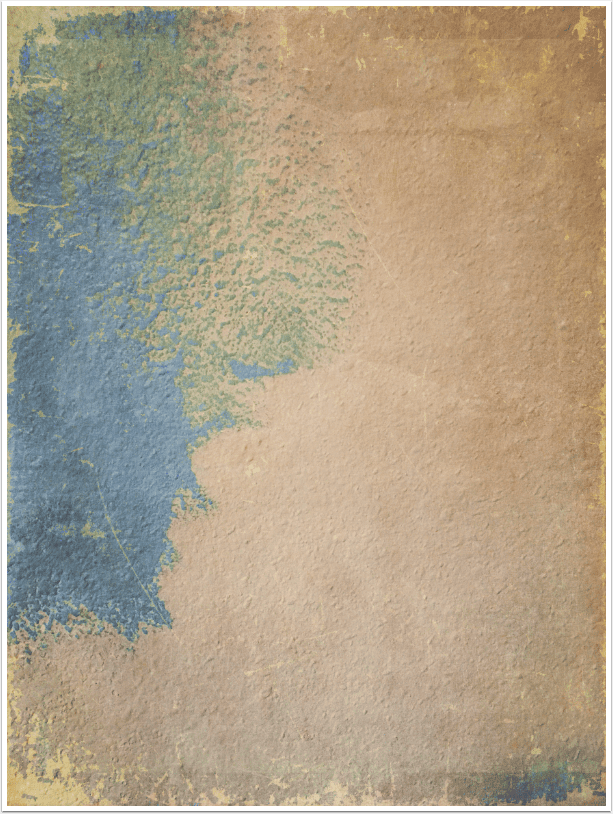 I found this gorgeous red on the FB page of friend Michael Carmantrand and sampled it for use in Superimpose where I would build the new image. 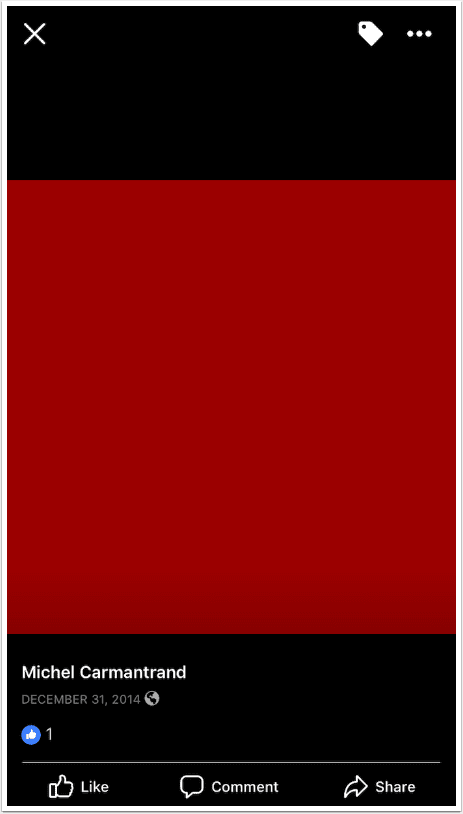 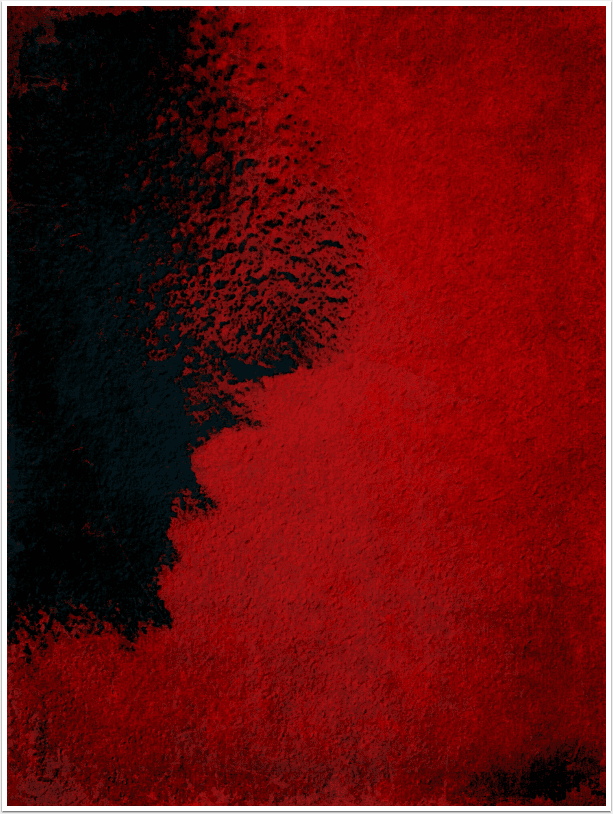 I applied the red as an overlay filter but it was a bit strong for what I was envisioning. I then ran this through Stackables to add some center light and knock back the harsher contrast of the original. 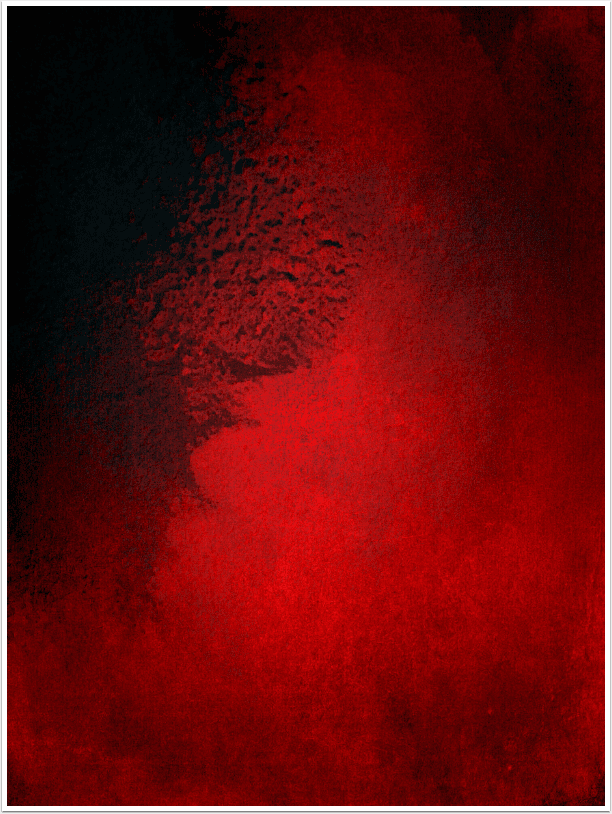 It was now time to introduce Botticelli’s young woman. 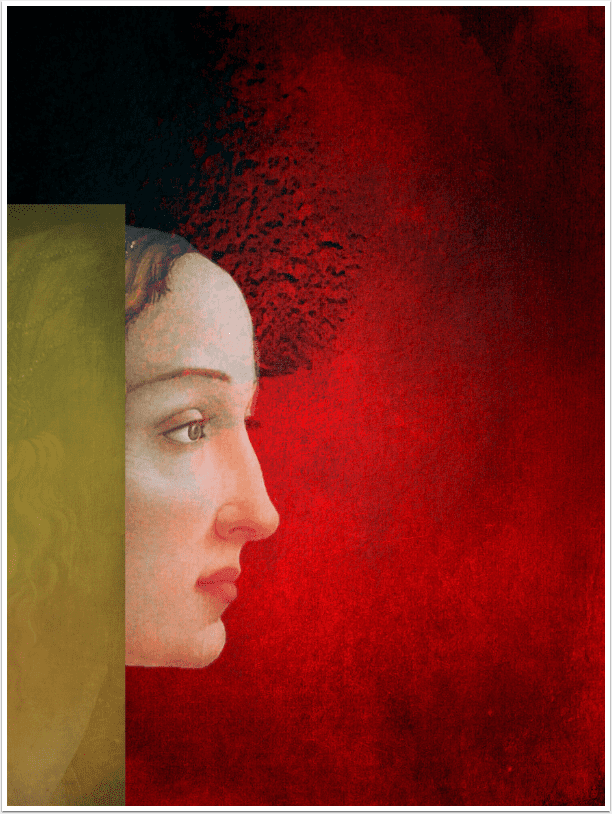 I removed the background around her face in Superimpose and brought her in with a bit of transparency to allow the background to inject some shading around her eye. Her positioning in the frame over this background also produced an “eyebrow” for her other eye. The green overlay was originally a test to see how I could use color within the image. I dulled it to an olive reminiscent of Botticelli’s palette and a bit of transparency to let the underlying hair become a textural element in the final piece. 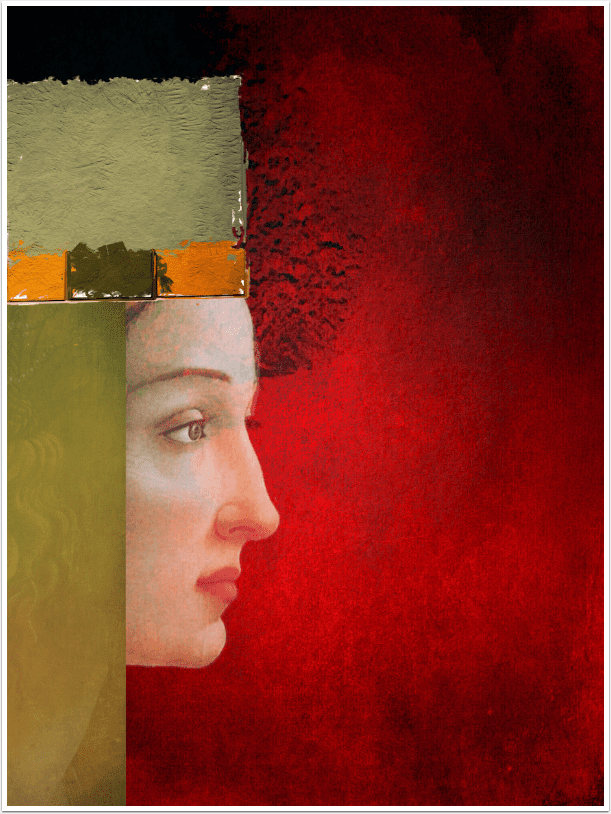 Next, I lifted a fragment from an early painterly piece. I keep a handful of these as masks in my Superimpose library.

I then went through a series of colouring tests, working variously in Mextures, Stackables, PhotoCopier, Glaze, and Impresso to experiment with shading, texture, and color.

And that was my weekend! Joanne, thank you for letting me share this glimpse into what was more of an edit track than a shooting journey. 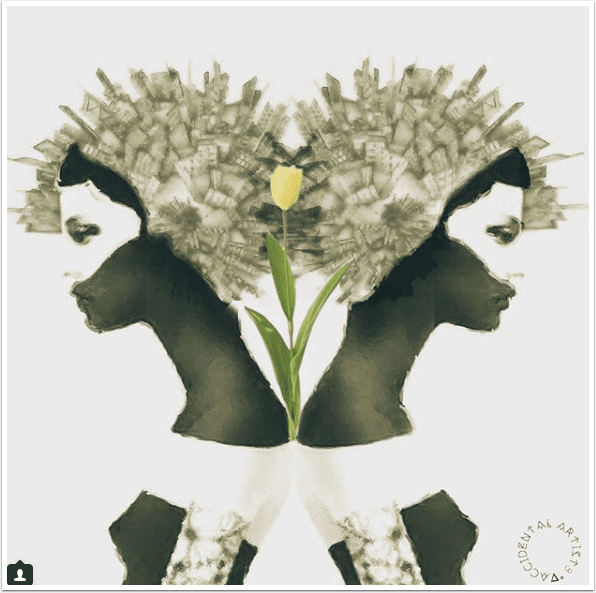 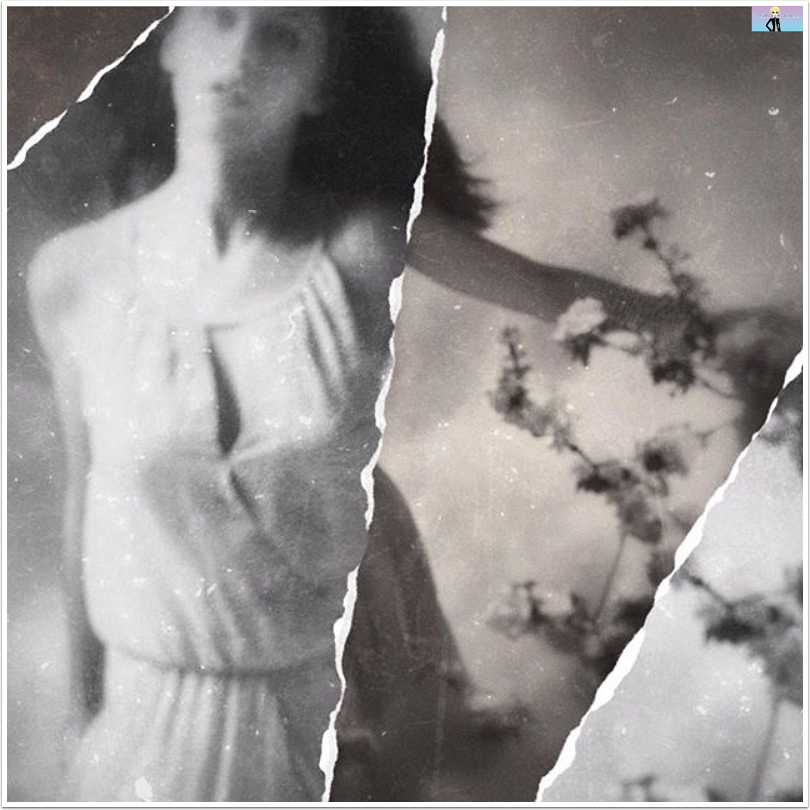 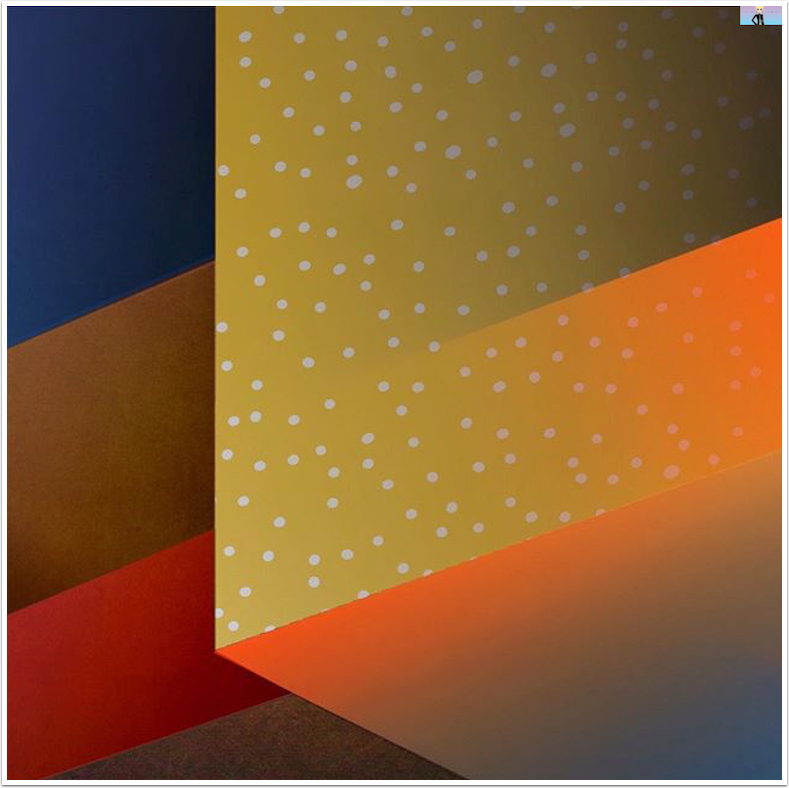