According to a report in Fortune today, they state that despite Apple being the most profitable mobile company, this has come about largely due at the expense of Nokia, Sony Ericcson, LG and Motorola. 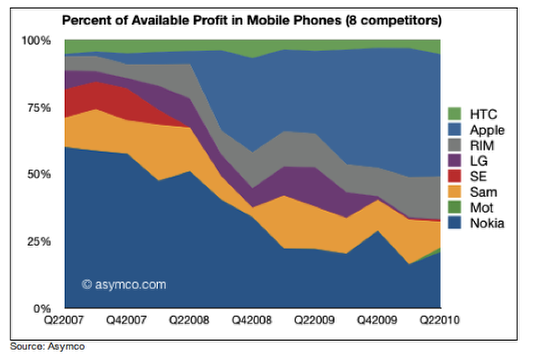 Asymco’s Horace Dediu who put this data together said,

"Will Android change this picture?" he asks rhetorically. "As I’ve argued before, Android is most attractive to the unprofitable and the strategically constrained. Can having undifferentiated new products change this? As Nokia is unlikely to license Android, and RIM seems very unlikely and Apple is out of the picture, the only possible contenders are Samsung, LG, HTC, Motorola and Sony Ericsson.

"Motorola and Sony Ericsson have both returned to profitability but with a very small volume Android strategy. However the incumbents fielding Android are really facing a far more sinister threat: the smaller local brands in China (e.g. ZTE) and emerging markets."

Some assume, as Dediu puts it, that the future belongs to the Korean cell phone manufacturers (i.e. Samsung and LG). But if they are hoping to turn a big profit, using Google’s (GOOG) Android to bet against Apple could be a risky. What do you think?